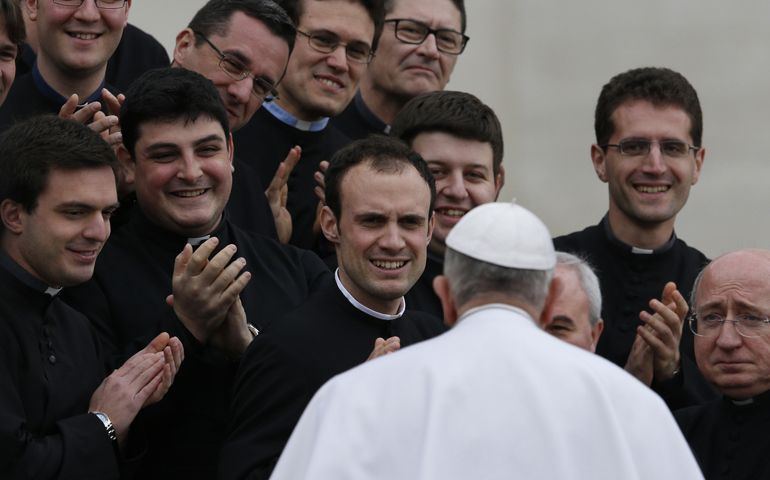 The first time I saw the new pastor of a nearby parish, he was wearing a T-shirt and jeans, and standing in a garbage dumpster.

It was early November 2012, just after Hurricane Sandy ripped through New York and New Jersey barrier beaches. The parish church was a mess. The new pastor called some of his old high school buddies to come over from the mainland to help rip out the damaged church. The priest was tromping the debris down.

I supposed he belonged to the clerical "boy's club" -- the closed crowd of cassock-wearing, cigar-chomping aficionados of steak and Scotch. But, there he was, up to his knees in what was pulled from church walls and floors. He did not seem terribly clerical that post-Sandy day.

Oh, you say: nice story, but clericalism is real. Yes, I know clerical cronyism spills out from fancy restaurants, appears in box seats at sports events, and finds its way to Caribbean cruises and vacations. Over expensive dinners, or along with the beer and hot dogs, or between piña coladas, the players trade their chips and gather gossip. It has everything to do with careerism and nothing to do with ministry.

I wonder sometimes if that is why so many good diocesan priests left. The gossip is bad enough, but the preening and politicking for power and prestige is truly sickening. It often boils down to who sits where -- at the dinner, at the ceremony, in the car. Many left. Some got married, some joined religious life.

I wonder also, is that why so many diocesan seminarians called it quits? One told me about his "ministry year" at a parish, when he watched priests toss rolls of cash across a table -- this funeral, that burial, this baptism, that wedding -- while not one hundred yards away families lived in wooden shacks with plastic taped over broken windows. He left as well.

Pope Francis wants pastors to smell of the sheep. He rails against clericalism, and I think rightly so. Wasn't there some curial cardinal -- a religious -- who converted three Rome apartments into one? Yes, Holy Father, the rest of the world wonders along with you where he got the money. It wonders as well about the overstuffed bishops in overstuffed chairs whose residential renovations cost millions. It wonders about the French cuffs and gold cufflinks peeking out from cassock sleeves. It wonders about the beach club memberships and first-class plane tickets.

Of course, I can argue it the other way as well. If the diocesan bishop is the vice president of a fair-sized subsidiary of the multinational corporation called the Catholic church, why shouldn't he enjoy some perks of office? Therein lies the rub. The bishop meets a lot of important people, it's best to show up on time and well-appointed to the dinner or the meeting. But still, does the fisherman need $400 shoes?

Sometimes the job itself feeds the narcissistic self-centeredness that pops up all over the clerical landscape. As with all else, some balance is in order.

And let me tell you, it takes balance to get into a dumpster. No matter the hearsay that preceded him, that new priest suffered along with millions of others, when storm waters ruined homes, properties, and lives on the barrier islands.

When Sandy hit, birettas and cassocks were just then becoming badges for the newly ordained, which that dumpster-priest was not. He moved the daily Mass to noon, and said it in the parish hall, its floor still sandy from the improbably named storm and filled with donated clothing, diapers, toys, food, and paper goods, all needed to rebuild lives in homes that suffered bay or ocean water. After the Mass, volunteers cooked hot meals for all comers.

The new priest was there and he was not in a cassock. He smelled of the sheep. He might even have smelled of dumpster trash.

Parish | Clericalism puts the focus on careerism, not ministry

Australia's plenary can wait: We need an adjournment on scandal