There was a synod? About what? 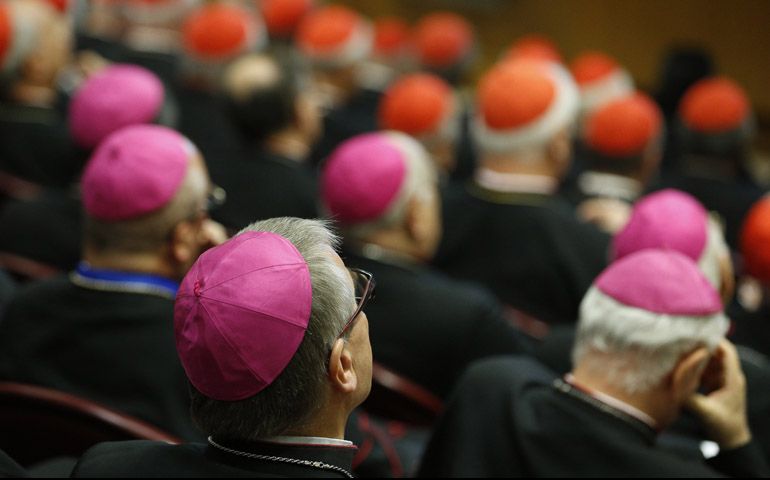 Bishops and cardinals attend a session of the Synod of Bishops on the family at the Vatican Oct. 24. (CNS/Paul Haring)

They had a synod on the family in Rome last October, but nobody went. Oh, lots of media folks were there, and a couple of hundred bishops and a handful of others were "in the hall," as they say. But who really attended?

There are what, 1.2 billion Catholics in the world? At least, there are that many persons who are -- or at one time were -- members of one of the 23 or so Catholic churches. (We tend to forget the Greek Catholics and the Ukrainian Catholics and the Coptic Catholics, and all the others.)

How many of them actually followed the synod? How many got down deep into the business about factions and language groups and all that? How many kept up with the Communion wars about divorced and remarried Catholics?

Yet a lot happened inside the synod. The German and Italian-language groups seemed to agree on an "internal forum" solution for divorced and remarried Catholics. German Cardinal Reinhard Marx said: "The message the church has to give is: Your dream is right, but when you fail we stay [with] you, we stay together, you belong to us." Some English-speaking synod bishops were not so sure; they wrote that they: "affirmed the current teaching and practice of the Church regarding the participation in the Eucharist of those who are divorced and civilly remarried."

That is the divide: reach over the communion rail or make it higher? No matter which, I think it is a serious misstep on the part of the powers-that-be to assume that a) everybody knows what went on at the synod; b) anybody cares.

Why? Think of your own recent conversations, perhaps over meals with extended family or while walking through the mall with an old classmate. There are lots of divorced people out there, and many, if not most, have remarried. Some think they are excommunicated, or were told they are by some zealous protector of the faith. Some have made half-hearted attempts at annulments, only to be stopped by one or another requirement, or by their own empty checkbooks. Some absolutely refuse to be annulled, insisting that theirs was a real marriage and their children are not illegitimate.

Do they even know a conversation has started? For sure Pope Francis, who in no uncertain terms focuses on the needs of the poor and suffering, does not seem overly concerned with regulations. Even so, he has made no changes to Catholic teaching. What he says, and has said repeatedly, is that divorced and remarried Catholics are Catholics. Even before the synod he attempted to make the annulment process simpler, and free.

Who knows about it? Who cares? Is it already too late?

What the synod wrestled with is essentially the question of "self-annulment."

Marriages break and new marriages come about without church paperwork. Sometimes the marriage was obviously flawed at the start. Many people's marriages sag under the fact that they didn't understand what a life-long commitment entailed. When that realization weighs too heavily, the marriage dies.

But many people find it too emotionally or financially expensive to go through an annulment. In fact, in most places annulment proceedings cannot begin until after the divorce. But the divorced couple already went through it once; it's just too hard to do it again. If eventually one or the other decides to ask for a church annulment, the cleric deciding the case must dig into ancient history for a reason to say the marriage never had a chance.

You have to admit, the rules make absolutely no sense to the vast majority of believing Catholics who have suffered divorce. That is why they ignore the rules. They form new partnerships, new families, to care for their children and themselves. Some believe they are excommunicated, and join other churches or denominations. Some simply ignore that possibility, and approach Communion as they wish. Sometimes these people are turned away, feeling they have been put in the docks, paraded about as public sinners. There is no coming back after that.

It is the public or even private denial of Communion in theory or in fact that sears the soul.

At the end of the day, the synod was largely about who can come to the table, and nothing seems to have been decided. To postpone a decision is to make a decision, and real people are suffering. It is not an easy thing to be denied Communion. It is a big deal. It is a very big deal.

[Phyllis Zagano is senior research associate-in-residence at Hofstra University in Hempstead, N.Y. She will speak February 9, 2016 at St. Michael's College, Vermont and May 6, 2016 at the University of St. Michael's College, Toronto. Her books include Women & Catholicism: Gender, Communion, and Authority and In the Image of Christ: Essays on Being Catholic and Female.]

People | There was a synod? About what?