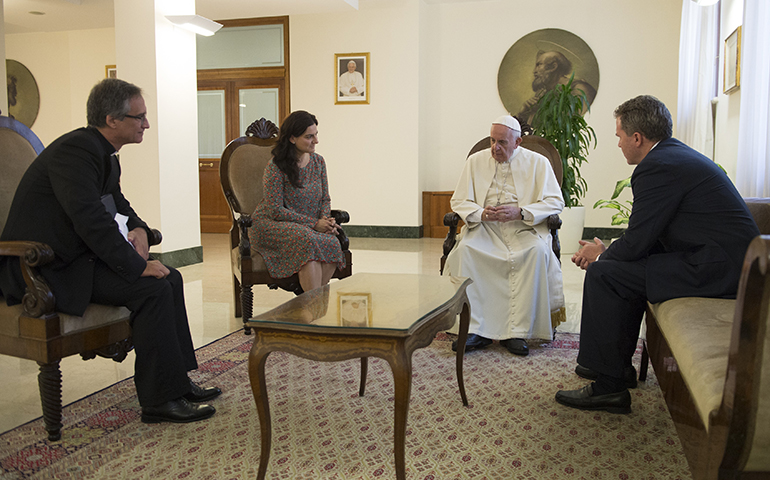 Who knows where the list came from, but the pope approved 12 men and one woman as consulters to the 2-year-old Vatican Secretariat for Communication.

This does not send a good message.

The objective is to have a single, unified, coordinated message across all platforms.

Fact check: it was the deacon Phoebe who carried Paul's letter to the Romans. In today's world, that could be called "release of information."

Despite its mainly male leadership, the Communication Secretariat includes forward-thinking individuals who understand how social media is overtaking traditional news sources. They are struggling to coordinate a system that has grown since the middle of the last century to meet the church's information needs.

But the Vatican does not have information officers in every dicastery even though a major business of a dicastery is to promulgate documents. And sometimes dicasteries hold public events. Then there are the activities of such disparate groups as the Pontifical Academy of Sciences and the Council of Cardinals. And then there is the biggest newsmaker of all, Pope Francis.

Most of the offices the Secretariat for Communication is coordinating are internal media, and a lot of information flows through these. While the public has access to them, they really are various types of press releases. Consider the Vatican Publishing House, L'Osservatore Romano, the Vatican Television Service, Vatican Radio, and the Vatican Internet Service. Everything they put out is "official," whether books, television shows, radio programs, newspapers, or webpages. Support services come from the Vatican Photographic Service and the Vatican Printing Press.

But then there is a question of external media — media not directly controlled by the Vatican. Aside from the locust-like hordes of journalists descending on major events, the Vatican Press Office serves worldwide external media ranging from the Associated Press and Agence France-Presse to the National Catholic Reporter and London's The Tablet, some of which have tiny offices in the press office — the Sala Stampa — on the Via della Conciliazione, just outside St. Peter's Square.

These all depend on dicastery statements, Vatican internal media, and on the two former journalists who run the Vatican Press Office: American Greg Burke, and his deputy Paloma García Ovejero, from Spain. The professional journalists digest the avalanche of words for their reading, listening, and viewing publics.

But the fact of the matter — and it is nobody's fault — is that social media is eroding the edges of internal/external media by providing consumers direct access to information. The problem is that what appears to be a "no spin zone" is spinning out of control, as secondary consumers edit and publish their own "information."

That is the very serious problem the Secretariat for Communication and its units face. If the messenger is not to be believed, then what happens to the message?

You think maybe everybody needs to remember who announced the Resurrection?

[Phyllis Zagano is senior research associate-in-residence at Hofstra University in Hempstead, N.Y. Her books include Holy Saturday: An Argument for the Restoration of the Female Diaconate in the Catholic Church and Women Deacons? Essays with Answers.]