We all engage in collateral damage to the earth 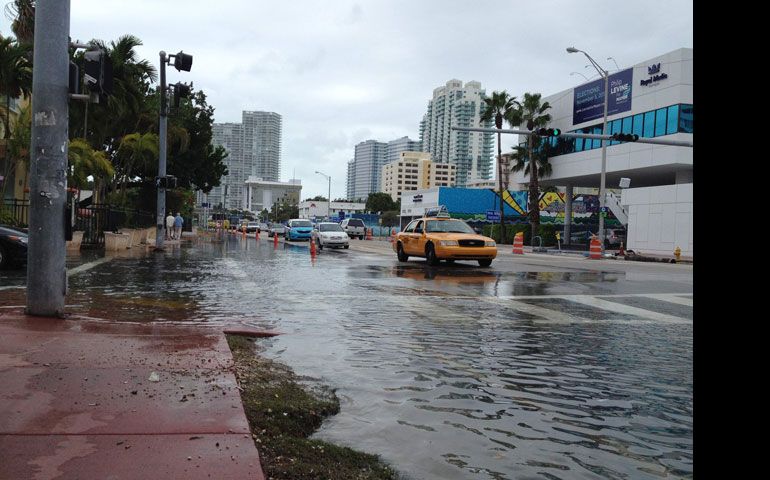 Does anyone know with any kind of surety how much time we have before our planet -- a second-rate rock spinning around a second-rate sun, in the words of Alfred North Whitehead -- is done in by global warming? Climate scientists tell us that ice caps are shrinking, glaciers are receding, sea levels rising, permafrost thawing, species of plants and animals vanishing -- all of it amid sustained droughts, heavy rains, heat waves, wildfire, floods and decreasing crop yields.

One report after another, in true multifariousness, has been persuasively arguing that we are teetering on a cliff before climatic catastrophes send us over. Since 1990, the Intergovernmental Panel on Climate Change, a United Nations group that shared the 2007 Nobel Peace Prize with Al Gore, has periodically issued studies -- each more dire than the last -- arguing that the good times are about to roll no more. The most recent report states, "Throughout the 21st century, climate change impacts will slow down economic growth and poverty reduction, further erode food security, and trigger new poverty traps." Civil wars may erupt, ones that are less driven by ideological differences than by frightened groups battling over access to decreasing supplies of water and arable land.

The chairman of the intergovernmental panel, Rajendra K. Pachauri, says, "Nobody on this planet is going to be untouched by the impacts of global change."

From all of this grimness, it's not a wild conclusion to believe that earthicide is happening -- the self-destruction caused by human choices to use fossil fuels to move around in cars, trucks, boats and planes or to heat homes and buildings. The emitted carbon dioxide is causing the planet to gag, as if gasping for air that for billions of years was breathable but no longer is.

As with the civil rights movement and the peace movement, a climate movement has emerged. Its members range from college students pestering their administrations to divest endowments in fossil fuel companies, to groups pushing legislation or litigation to take on big oil, big coal or some other perceived rogue industry.

Pardon my pessimism, but the odds are staggering that tweaking a law or two to impose stiffer regulations on polluters or pressuring politicians to fund programs for wind power or solar panels will do much beyond letting us feel uplifted because "I'm doing my part to go green."

The attacks on the earth are not pending, they are happening now -- or, as President Barack Obama said May 7, "as we speak."

I try hard not to kid myself. Yes, I commute about 2,500 miles a year by bicycle, which means a few thousand less tons of carbon that car addicts spew into Washington's air. Yes, my diet is void of meat, fish and eggs, which means I give no money to oil-dependent industrial farmers.

But, hypocritically, I'm as complicit as anyone. I travel in carbon-emitting airplanes. I subscribe to newspapers like NCR and magazines like The Progressive that need oil and coal to publish editorials hailing eco-sustainability. When seriously ill, I seriously head for a hospital seriously fueled by extracted energy. I pay Washington Gas to heat my home in the winter and the Potomac Electric Power Company to cool it in the summer. My home appliances? Well, that's enough. You get the idea.

Wendell Berry, the Kentucky farmer, poet and essayist, speaks for all of us who engage in collateral damage to the earth, whether directly or indirectly: "That we now live in an economy that is not sustainable is not the fault of only a few mongers of power. ... We are all implicated. We all, in the course of our daily economic life, consent to it, whether or not we approve of it."

If a consolation exists, at least we can chose not to be willfully ignorant of the degradation. Soon enough, the Intergovernmental Panel on Climate Change will be back with another yelp. And soon enough, too, to be likely forgotten. We live, after all, as Gore Vidal once sighed, in the United States of Amnesia.

Justice | We all engage in collateral damage to the earth