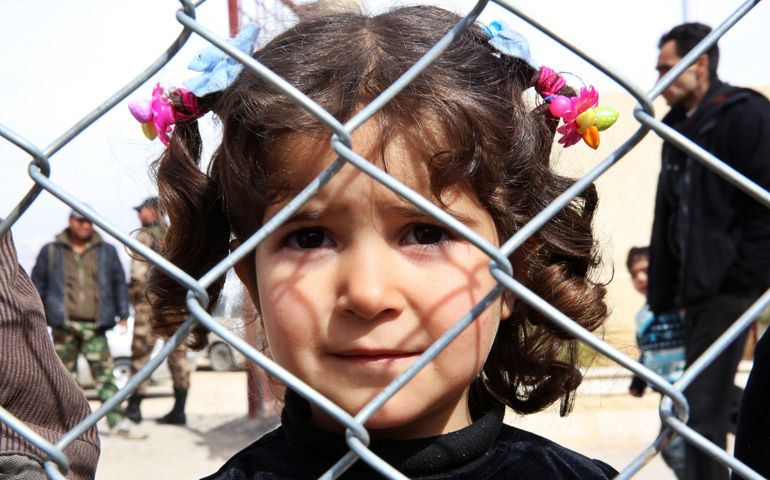 "In the many days to come, the mountain of the Lord's house shall be established as the highest mountain and raised above the hills," the Prophet Isaiah writes.

"Many peoples shall come and say: Come, let us go up to the Lord's mountain ... that he may instruct us in his ways, and we may walk in his paths. ...

"They shall beat their swords into plowshares and their spears into pruning hooks; one nation shall not raise the sword against another, nor shall they train for war again."

This prophecy will certainly be fulfilled when Christ comes again and his kingdom is totally established. There's no stopping it. But it could happen even before then. If only we would go up to the Lord's mountain and allow him to instruct us in his ways and wholeheartedly walk in his paths.

But instead, it seems like so much of the world and so many people in power are committed to going down into the dark valley of violence and war, ignoring the Prince of Peace's way.

As I write, the U.S. Congress is poised to grant President Barack Obama's request to use expanded military force -- including boots on the ground -- to fight the self-proclaimed Islamic State.

In his request known as the Authorization for Use of Military Force, Obama is asking Congress to approve the deployment of U.S. troops to Iraq for "enduring offensive ground combat operations" for at least three years.

Didn't the nearly nine years of war in Iraq teach us anything? That war claimed thousands of U.S. coalition military lives, hundreds of thousands of innocent civilian Iraqi deaths, at least $2 trillion, decimated Iraq and has led many Arabs to seek revenge against the U.S. and its allies.

Military action against the Islamic State is playing into their hands. They want to draw the U.S. and its military allies into a ground war so they can trumpet the message that "Christian crusaders" have launched an invasion upon Islam. Such a scenario would flood their ranks with radical Islamists from around the world.

Shortly after the start of the Gulf War in 1990, St. John Paul II wrote: "No, never again war, which destroys the lives of innocent people, teaches how to kill, throws into upheaval even the lives of those who do the killing and leaves behind a trail of resentment and hatred, thus making it all the more difficult to find a just solution of the very problems which provoked the war."

It can be strongly argued that the devastation caused by the U.S.-led invasion and occupation of Iraq, along with the torture of Iraqis by American personnel at Abu Ghraib prison, largely set the stage for the birth of the Islamic State and several other jihadist groups.

Instead of fueling more war, we need to pressure our government to provide far more humanitarian assistance to our fellow Christians and all others who are suffering from the barbarism of the Islamic State. Many are now refugees living in very poor camps in neighboring countries.

Also, we need to kindly consider making a generous donation to Catholic Relief Service's emergency fund for the Middle East.

Additionally, nonviolent strategies like working for an international embargo against oil coming from the Islamic State as well as securing a total arms embargo need to be fully implemented.

In his famous 1967 Declaration of Independence from the War in Vietnam speech, the Rev. Martin Luther King Jr. said: "Our greatest defense against Communism is to take offensive action in behalf of justice. We must with positive action seek to remove those conditions of poverty, insecurity and injustice which are the fertile soil in which the seed of Communism grows and develops."

And the same is true with terrorism today. If we will muster up the faith and courage to redirect the vast resources dedicated to war and instead put them at the service of removing "those conditions of poverty, insecurity and injustice which are fertile soil" in which the seed of terrorism grows and develops, we will have then finally beat our swords into plowshares.

[Tony Magliano is an internationally syndicated social justice and peace columnist. He will be the keynote speaker at Our Lady of Fatima Catholic Church's May 2 social awareness seminar in San Clemente, Calif. He is available to speak at diocesan or parish gatherings about Catholic social teaching. His keynote address, "Advancing the Kingdom of God in the 21st Century," has been well received by diocesan gatherings from Salt Lake City to Baltimore. Tony can be reached at tmag@zoominternet.net.]

Islamic insurgency isn’t just a Mideast problem, as Africans know all too well