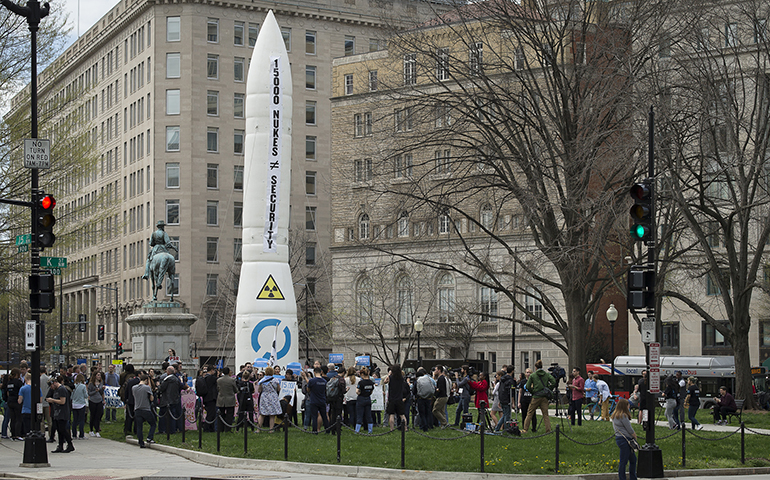 Demonstrators in Washington gather around an inflatable nuke to protest nuclear weapons while world leaders were in the U.S. capital for the Nuclear Security Summit. (CNS/Tyler Orsburn)

In the Garden of Gethsemane, as Jesus was prayerfully agonizing over his impending violent death, a large crowd with swords and clubs sent by the chief priests moved in to arrest him.

Seeing this, one of Jesus' disciples "put his hand to his sword, drew it, and struck the high priest's servant, cutting off his ear. Then Jesus said to him, 'Put your sword back into its sheath, for all who take the sword will perish by the sword.'"

Tragically, throughout the centuries much of humanity has failed to heed the Lord's wisdom.

According to the Stockholm International Peace Research Institute, world military expenditure was estimated at more than $1.7 trillion in 2014.

President Obama's proposed fiscal year 2017 Department of Defense budget comes in at a whopping $582.7 billion. More than the next seven largest military budgets combined -- including China, Saudi Arabia and Russia.

As reported by The New York Times, American foreign arms sales rose to $36.2 billion in 2014, continuing to ensure the United States' position as the world's single largest arms merchant -- controlling more than 50 percent of the weapon's market.

Many of these weapons continue to be sold to poor nations like Chad, diverting precious money that should instead be going to meet people's basic needs.

Speaking to a group of young people in Turin, Italy, in 2015 Pope Francis said, "There is the hypocrisy of speaking about peace and producing arms, and even selling weapons to this one, who is at war with that one."

Seeking fresh insights to counter the worn-out, death-dealing argument that powerful militaries and lethal weapons are needed to defend one's nation, I turned to Eli McCarthy, Ph.D., director of the Office of Justice and Peace for the Conference of Major Superiors of Men.

"It's unrealistic and unwise to keep arming groups in conflict situations. The 'war on terror' for the last 15 years has exacerbated the problems and overall failed to get at the root causes of conflict," said McCarthy.

Instead, the U.S. government and international community need to invest much more in training and research on nonviolent resistance strategies like unarmed civilian protection, he noted.

"There are many courageous persons in regions of conflict risking their lives engaging in trauma-healing, restorative justice, interreligious dialogue, mediation, early warning systems and nonviolent resistance."

McCarthy said creative diplomatic efforts -- including all key stakeholders -- and genuinely addressing the basic needs of people are essential to easing tensions and conflict.

He also emphasized the importance of investing in industry transition in U.S. communities that rely on the arms industry for jobs.

We need to use humanizing language towards all, and work to reduce cultural marginalization, added McCarthy.

"Justice, right reason, and the recognition of man's dignity cry out insistently for a cessation to the arms race," wrote St. John XXIII in his prophetic 1963 encyclical Pacem In Terris ("Peace on Earth").

Let each of us pray and work for the day that justice, right reason, and the recognition of the dignity of every person prevails over the evil of the arms race, the arms trade and military arms in general.

May the Spirit of the nonviolent Jesus lead us to disarm our hearts. For only people with nonviolent hearts are capable of building a nonviolent world.