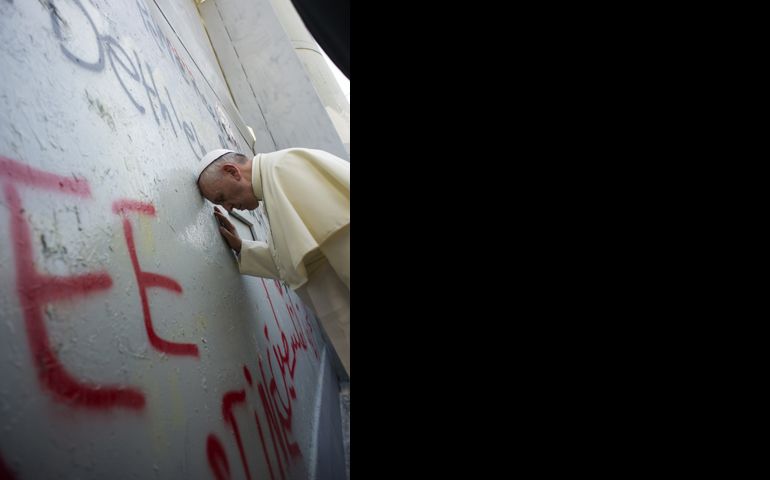 Pope Francis stops in front of the Israeli security wall in Bethlehem, West Bank, May 25. (CNS/L'Osservatore Romano, pool)
This article appears in the Francis in the Holy Land feature series. View the full series.

Vatican City — During his recent pilgrimage to the Holy Land, the pope of surprises gave the world an unexpected, powerful message.

On his way to celebrate Mass in Bethlehem, Pope Francis suddenly got out of his popemobile and walked toward the towering concrete Israeli-built barrier that divides Israel from the Israeli-occupied territory of the West Bank.

In a highly symbolic scene, with Israeli soldiers in a tower above him, Pope Francis touched the separation wall and prayed with his head bowed at precisely the spot where spray-painted messages cry out: "Pope we need some 1 to speak about Justice Bethlehem look like Warsaw ghetto" and "Free Palestine." Then he touched his forehead to the wall.

"This wall is a sign of division, that something is not functioning right," said Vatican spokesman Jesuit Fr. Federico Lombardi. And Pope Francis' prayer there "signifies for me his desire for peace, for a world without walls."

The pope reinforced his message with another surprise: inviting Palestinian President Mahmoud Abbas and Israeli President Shimon Peres to the Vatican to pray together. The three met for that prayer Sunday in the Vatican gardens, then, with Patriarch Bartholomew I of Constantinople, spiritual head of Orthodox Christians, planted an olive tree, a symbol of peace and hope. No walls separated them as they prayed together.

Afterward, Pope Francis made a heartfelt appeal to Abbas and Peres, saying they "must respond" to their people's longing for peace.

The Holy Father encouraged them to understand that "peacemaking calls for courage, much more so than warfare. It calls for the courage to say yes to encounter and no to conflict; yes to dialogue and no to violence; yes to negotiations and no to hostilities."

Barriers -- including the separation wall and border crossings, lack of access to proper government permits, and discrimination -- make the prospects grim even for Palestinians able to obtain gainful employment in Israel, the Sustainable Investments Institute says.

According to The Legal Center for Arab Minority Rights in Israel, even Palestinian citizens of Israel often face discrimination in work opportunities, pay and conditions.

In the tradition of the Sullivan principles, which were developed to counter racial workplace discrimination in South Africa during apartheid, Father McManus launched in 1984 the MacBride Principles, a corporate code of conduct for American companies doing business in Northern Ireland.

Father McManus explained to me that the MacBride Principles campaign is widely considered the most effective tool against anti-Catholic discrimination in Northern Ireland.

The eight Holy Land Principles in summary call on U.S. companies operating in Israel and Palestine to adhere to equal and fair employment practices in all areas without discrimination to actively recruit underrepresented employee groups and to work with governmental and community authorities to eliminate ethnic, racial and religious disparities in government spending on education, training, access to health care and housing.

If Cisco Systems, a large American networking company that has a major presence in Israel and the Palestinian West Bank, can be persuaded to sign the Holy Land Principles, Father McManus feels confident that many other U.S. companies will find it advantageous to sign on as well.

For Cisco to be persuaded, Cisco will need to hear from many of us. Learn how to get in touch with Cisco.

During his pilgrimage to the Holy Land, Pope Francis said: "There is a need to intensify efforts and initiatives aimed at creating the conditions for a stable peace based on justice, on the recognition of the rights of every individual, and on mutual security."

The adoption of the Holy Land Principles will help do just that.

Four goals of the papal visit to Holy Land