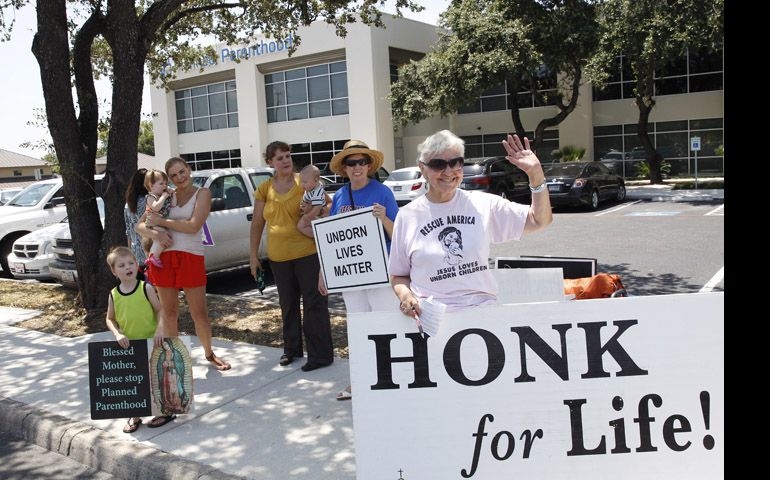 People protest Aug. 6 in San Antonio on a sidewalk outside a Planned Parenthood clinic that performs abortions. (CNS photo/Paul Haring)

How low can society go?

When one considers the many ways countless human beings are treated like cheap disposable products -- from children exploited by pornographers, to young sweatshop workers exploited by wealthy corporations -- it's hard to imagine how much worse it can get for the poor and vulnerable.

But dismembering and vacuuming babies out of their mother's wombs, and then transferring their aborted body parts for monetary compensation to research groups, is as low as it gets.

Performing well over 300,000 abortions annually, the United States' largest abortion provider Planned Parenthood Federation of America, has expanded its bloody business to performing many abortions in ways that not only kill the babies, but protect their sought out body parts. The protected parts of the dead babies are then shipped to research labs. And in the process of this enterprise Planned Parenthood profits financially, according to The Center for Medical Progress (CMP).

Planned Parenthood claims to be operating here within legal bounds according to federal law, which does allow reasonable repayment for the procurement and shipping of organs and other human tissues to researchers.

But as part of a 30-month-long CMP investigative journalism study, where actors posing as buyers for a fetal tissue procurement company went undercover taping meetings with several top Planned Parenthood officials, it appears the haggling over the price of aborted baby parts, by a Planned Parenthood top official, indicates that making a profit is a major motive here.

During an undercover taped meeting with Dr. Mary Gatter, medical director at Planned Parenthood Pasadena and San Gabriel Valley in California, actors posing as biotech company officials say to Gatter, "What would you expect for intact [fetal] tissue"? Gatter replies, "You know, in negotiations whoever throws out the figure first is at a loss, right?" And she adds, "I just don't want to lowball," before suggesting "$75 a specimen."

Gatter offers to use a "less crunchy technique" to obtain intact baby parts.

Gatter admits that in some prior fetal tissue deals, Planned Parenthood received payment in spite of incurring no cost: "It was logistically very easy for us, we didn't have to do anything. So there was compensation for this." She accepts the higher price of $100 per specimen understanding that it will be only for high-quality fetal organs: "Now, this is for tissue that you actually take, not just tissue that someone volunteers and you can't find anything, right?"

But later in the meeting Gatter suggests $100 per specimen is not enough and concludes, "Let me just figure out what others are getting, and if this is in the ballpark, then it's fine, if it's still low, then we can bump it up. I want a Lamborghini."

It certainly appears that Planned Parenthood is profiting from this gruesome enterprise. But even if they are not, the paramount moral concern here should be that well over 300,000 babies who have not been given the chance to see the light of day, are brutally killed through abortion every year at U.S. Planned Parenthood facilities. And that their tiny body parts are then exchanged for money from research labs.

Although some of these labs are using the baby parts to try to find cures for diseases, that still does not make all of this right.

One of the most fundamental Catholic moral principles is: "The end does not justify the means." Thus the good end of attempting to find cures for diseases, cannot justify the evil means of dismembering the smallest human beings and treating their body parts as though they were auto parts.

At the Center for Medical Progress' website you can view the undercover meetings with Planned Parenthood officials. But be advised that some video sections depict disturbing scenes of aborted baby body parts for distribution. And indeed, any person who genuinely respects human life should be disturbed, and disturbed into action.

In one of the other undercover videos, Planned Parenthood Federation of America's Senior Director of Medical Services, Dr. Deborah Nucatola, casually describes while eating salad and sipping wine, how Planned Parenthood provides hearts, lungs, livers and heads taken from aborted babies, including babies killed by partial birth abortion -- which with rare exception is totally banned by federal law.

After watching this video, Marjorie Dannenfelser, president of the pro-woman/pro-life organization known as the Susan B. Anthony List said, "The moment when the destruction of a human being becomes just business as usual is a moment we must address."

According to the Susan B. Anthony List, during fiscal year 2013-2014, Planned Parenthood received more than $1.4 million per day, in the form of government grants, contracts, and Medicaid reimbursements which amounts to taxpayer funding of 41 percent of Planned Parenthood's overall revenue.

Federal law prohibits the use of federal money to be used for abortions, except in cases involving rape, incest or the mother's life is in danger. So while the federal monies are meant for contraception programs (And some contraceptives act as abortifacients), and the health services Planned Parenthood provides to women, this federal infusion of money arguably frees up other funding sources for its abortion industry.

Franciscan Cardinal Sean O'Malley, chairman of the Committee on Pro-Life Activities of the U.S. Conference of Catholic Bishops wrote, "Pope Francis has called abortion the product of a 'widespread mentality of profit, the throwaway culture, which has today enslaved the hearts and minds of so many.' "

The cardinal condemned "the now standard practice of obtaining fetal organs and tissues through abortion."

O'Malley pastorally added that persons experiencing revived trauma from their involvement in abortion, are most welcome to contact the church's post-abortion healing ministry known as Project Rachel.

Americans United for Life -- an outstanding national pro-life legal team -- is asking us to contact our two U.S. senators urging them to co-sponsor Senate Bill 1881 -- a bill to prohibit federal funding of Planned Parenthood Federation of America. Although this bill was narrowly defeated in the Senate, leadership in the Senate is looking to re-introduce the bill once it has a few more co-sponsors. Also, please ask your congressperson to sponsor a similar bill in the House.

It is also very important for us to ask our federal and state legislators to re-channel funding from Planned Parenthood to community health centers -- which offer a full range of health services.

A morning of peaceful protests at Planned Parenthood facilities nationwide will be held on August 22 from 9 a.m. to 11 a.m. You can find the nearest location here. I'm planning to participate at the Towson, Md., site.

As followers of the God of life, we are obliged to work for the protection of the lives and limbs of everyone -- especially the most vulnerable.

Let's not take this obligation lightly.

The history of the birth control pill is a page-turner

Abortion by prescription now rivals surgery of US women