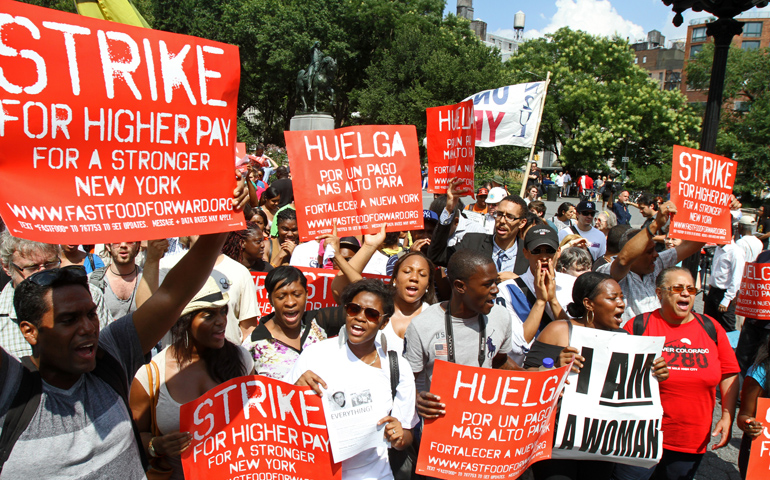 Fast-food workers and their supporters participate at a rally in demand of higher wages July 29 at Union Square in New York. (CNS/Gregory A. Shemitz)

Critical of the enormous gap between the haves and the have-nots, Pope Francis said, "This imbalance is the result of ideologies which defend the absolute autonomy of the marketplace and financial speculation. Consequently, they reject the right of states, charged with vigilance for the common good, to exercise any form of control" (Evangelii Gaudium, "The Joy of the Gospel").

Among the many ways the Catholic church strives to be vigilant for the common good is its call for a living wage.

Since Pope Leo XIII's 1891 encyclical Rerum Novarum ("On Capital and Labor"), popes have called for the right of all workers to receive wages sufficient to provide for their families.

Often because of corporate greed and government indifference, countless workers throughout the world labor long hours in inhumane workplaces for wages that keep themselves and their families in poverty.

In the United States, where income inequality is wider than in any other advanced nation, there are more than 3.6 million workers with wages at or below the federal minimum wage of $7.25 per hour, according to 2012 data from the Bureau of Labor Statistics.

In a recent letter to the U.S. Senate, Archbishop Thomas Wenski of Miami, chairman of the U.S. bishops' Committee on Domestic Justice and Human Development, and Fr. Larry Snyder, president of Catholic Charities USA, said the current federal minimum wage fails "to provide sufficient resources for individuals to form and support families."

"Additionally," they note, "while some minimum wage workers are teenagers, research suggests as much as 25 percent of workers who would benefit from a minimum wage increase are parents. Workers deserve a just wage that allows them to live in dignity, form and support families, and contribute to the common good."

Imagine trying to support yourself, yet alone a family, on $7.25 an hour. Obviously, most members of Congress -- more than half of whom are millionaires -- do not have such sensitive imaginations.

And with corporate profits soaring, it would be fair if companies would share some of the wealth with their hard-working employees at the bottom rung -- the ones who actually do the lion's share of the work. But don't count on it. Most corporate CEOs will continue to urge Congress not to raise the minimum wage.

But in his recent State of the Union address, President Barack Obama urged Congress to increase the minimum wage and announced that he plans to sign an executive order raising wages for workers employed by federal contractors to $10.10 an hour.

The increase will benefit many service employees, such as cafeteria workers and busboys at Smithsonian museums, bringing a full-time employee from approximately $15,000 a year to around $21,000.

Please email and call your two U.S. senators and congressperson (Capitol switchboard: 202-224-3121), urging them to follow the president's lead and raise the minimum wage to $10.10 per hour.

Pope Francis recently noted, "It is therefore necessary to remove centrality from the law of profit and gain, and to put the person and the common good back at the center."

Raising the minimum wage is a good way to begin.