Mardi Gras is not what we see on the news 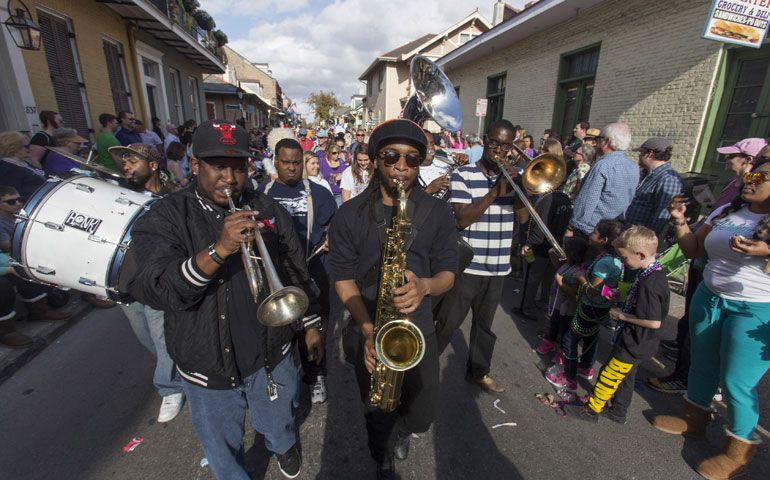 A brass band performs during the Mystic Krewe of Barkus dog parade in the French Quarter of New Orleans Jan. 31. (Photos by Newscom/Reuters/Lee Celano)

I write this leaving New Orleans, where the hibiscus is in bloom, and flying into a blizzard in Colorado. I write this as a different kind of blizzard descends on the state of Iowa. It is caucus day for the 2016 presidential race and the commentators and journalists and photographers threaten to overwhelm, if not outnumber, the people of that state.

It is the season of storms: political ads and something we persist in calling debates, though there is less a clash of ideas than an exchange of insults. A feature of the storm is headlines reporting and predicting doom, lightning flashes in font. A glance at Internet news sites suggests a nation only and always splintered into various armed camps.

I'm thinking of this because that's certainly the book on New Orleans. Murder City on the Mississippi, if one believes the chatter, with Mardi Gras as its Bada-Bing Club spreading across the entire French Quarter. Which seemed curious as I sat on a sidewalk in the French Quarter on the last Sunday afternoon in January, with three of my children and two of my grandchildren in tow, the five of us watching the Mystic Krewe of Barkus, a dog parade, make its way accompanied by jazz bands and guided by costumed human handlers.

Since dogs are the stars, doggie treats, as well as brightly colored beads, are tossed into the crowd for the people and dogs who line the route.

The informal theme seemed to be politics. Though the two Chihuahuas dressed in marine uniforms and caps, pushed in a stroller by a man and a woman dressed as George and Martha Washington and carrying a sign reading, "Defenders of Our Freedom," seemed confusing enough to suggest a few rum punches may have been involved, we saw no public drunkenness and the only bare chests and bottoms were on the dogs.

It was, in a word, wholesome. And fun. We cheered the orange-haired mixed breed with the overbite and the forehead tuft and the sign on his wagon, "Make America Bark Again."

We hooted and clapped for the service dogs and the rescue dogs and the fire dogs and the police dogs. We marveled at dogs the size of Shetland ponies (one wearing a lion's ruff and lying placidly on his side, tongue lolling, in what was supposed to be his circus cage.)

People "excused me'd" and shared thrown and caught treats with our kids. They patted the dogs that came sniffing our way and poured water from bottles into bowls for the thirsty dogs. They got between the occasional snarling dogs and kept the peace.

This French Quarter parade had its twin in the Garden District the day before, when we perched on the swollen roots of a live oak tree in front of someone's house and watched the Krewe of Choctaw and the Krewe of Freret come rumbling and marching and dancing down the street.

The little ones ran out into the street, waving their arms and calling, "Throw me something!" And throw something the krewes did: beads, of course, and MoonPies and stuffed snakes and Frisbees and beer cozies and jeweled masks and plastic sunglasses and teddy bears and lamb purses and mini-footballs and cups and rubber-tipped spears and plastic swords and stuffed hearts with "Kiss me, I'm Irish," on one side and "Kiss me, I'm Italian," on the other.

There were local children perched in the seats anchored atop their parade ladders, the best seat on the street. And there were children from middle and high schools all over New Orleans parish.

Drum majors swallowed up in solemn suits and plumed hats, majorettes stepping in tasseled white boots that sounded rhythmic clicks along the asphalt. Girls in sequins did Super Bowl halftime dance routines while everywhere boys pounded and banged on drums.

Some of the bands were good, and on their way to something better. We caught snatches of trumpeters blowing with a jazz-born freedom and trombones answering.

We clapped and hooted and busted some mild sideline moves. Neighbors greeted one another and natives welcomed us, glad to show us New Orleans and its Mardi Gras as a city-wide celebration that takes place as much in neighborhoods and side streets, as much with water bottles in backpacks and babies in strollers, as it does on Bourbon Street with drunken revelers vomiting in doorways.

There are plenty of dangers in confining one's interactions to a screen. We seem to have the world at the command of a keystroke, but with each stroke, we hand over our sense and our perceptions and, finally, our judgments to all the voices in the ether.

The voices we're most likely to hear are the loudest and those with the most arresting (for which, read, violent and disturbing) message. So we come to believe we know all sorts of people and all sorts of places we've never met or seen.

Our hosts on this trip were my son and his wife. They are in New Orleans for graduate school and will be leaving after the commencement ceremonies in May. They've been telling us for the past two years that Mardi Gras is not what we see on the news.

They talk of neighborhood and parish parties, of school kids who will march for miles and miles over the course of the Carnival season, proud of their bands and schools.

They talk of an entire town getting ready for Lent, and of the way the city hushes and slows on Ash Wednesday. It is, they say, a place where a visitor from Mars might not know of ashes or holy days, but would surely sense the change in the very air of the city.

They say the way they have experienced Carnival in New Orleans is a practice they plan to take with them and to keep wherever they settle down.

Mothers tell their children to "Go outside," as a cure for all kinds of fretfulness and complaints. It remains good advice. I went outside — outside of my assumptions and my fears — and called out "Happy Mardi Gras" to strangers up and down the streets of New Orleans.

I had, as my mother would also say, "a big time," and I have the feathered tomahawk to prove it.

Spirituality | Mardi Gras is not what we see on the news

You ain't seen nothin' yet

My parents opened the door to the unmerited gift of grace

The core message of the Gospel: God first loved us