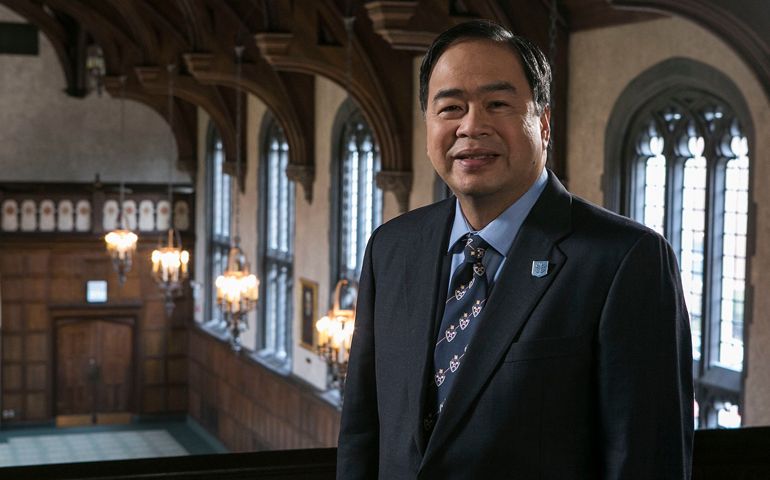 Editor's Note: Welcome to Campus Notebook, NCR's college round-up, where every Friday we bring you the latest news in Catholic college and university life. Do you have news you would like to share? Email Shireen Korkzan at skorkzan@ncronline.org.

Chicago — Amado Gabriel Esteban will serve as DePaul University’s first non-ordained president starting July 1. University leaders announced the leadership change in a press release Feb. 16. DePaul’s current president, Vincentian Fr. Dennis Holtschneider, will step down to serve as executive vice president and COO of Ascension, which is, according to the organization’s website, the world’s largest Catholic health system. Esteban, originally from the Philippines, is currently president of Seton Hall University in South Orange, N.J. The Congregation of the Mission, commonly known as the Vincentians, established DePaul in 1898.

Rensselaer, Ind. — Alumni of financially strapped St. Joseph's College are not giving up on their alma mater. One of them informed NCR that they have created the "Involved for Life" Fund in an attempt to raise $20 million by April 1, hoping that will keep the college afloat. St. Joseph’s has been on probation since November because of a severe financial crisis. Last month, the college’s president said the school needed $100 million to pay of its debt and be successful in the higher education marketplace. A week later, the school announced it would have to close.

St. Joseph’s College sent a letter dated Feb. 14 to the Indiana Department of Workforce Development outlining the 36 employees the school will be letting go by April 17, including 16 coaches, two admissions counselors and the assistant vice president for institutional advancement. The letter also mentions that more cuts will follow with at least 60 days' advance notice. The college currently employs about 200 people.

Marylhurst, Ore. — Marylhurst University's Department of Interdisciplinary and Applied Liberal Arts is starting a speaker series on social justice issues with support from Oregon Humanities, the National Endowment for the Humanities and the Oregon Cultural Trust.

Jade Aguilar, assistant professor of sociology and women’s and gender studies at Willamette University, will lead the first talk in the series, titled "Mind the Gaps: How Gender Shapes Our Lives," Feb. 23. Talks start at 6:30 p.m. PST in the university’s Old Library in the BP John Administration Building.

Marylhurst University was founded by Sisters of the Holy Names of Jesus and Mary in 1893 but became an independent Catholic institution in 1959.

Worcester, Mass. — The Association of Catholic Colleges and Universities has awarded the Presidents’ Distinguished Service Award to Thomas Landy, lecturer in the sociology and anthropology department at the College of the Holy Cross. He is the director of the Rev. Michael C. McFarland, S.J., Center for Religion, Ethics and Culture.

A press release said Landy was given the award “for his personal service of exceptional quality to Catholic higher education.” He has been working for the college for more than 18 years. Landy is also the founder of Collegium: A Colloquy on Faith and Intellectual Life, which serves “to help faculty at Catholic colleges and universities better understand the mission of Catholic higher education, and to prepare them to become leaders in advancing that mission in creative ways.”

According to its website, the collegium currently serves faculty members from 65 Catholic colleges and universities.