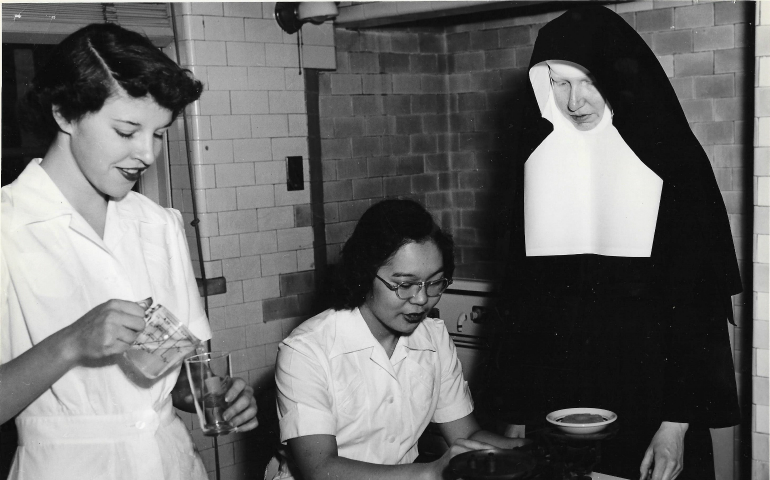 Things have certainly changed at sister-founded US colleges since this photo of a 1951 home economics class was taken. Pictured is Sr. Miriam Clare Heskamp with two students. (Courtesy of Marian University)

Washington — Georgetown University in Washington, D.C., will hold a spiritual ceremony and building dedication April 18 to honor the 272 enslaved people that Maryland Jesuits sold to Louisiana plantation owners in 1838.

The event is being done in partnership with the Washington Archdiocese and the Jesuit Conference.

The ceremony, "The Liturgy of Remembrance, Contrition and Hope," will start at 10 a.m. in Gaston Hall. It will include Cardinal Donald Wuerl, archbishop of Washington; Jesuit Fr. Robert Hussey, provincial of the Maryland Province Jesuits; and Jesuit Fr. Timothy Kesicki, president of the Jesuit Conference.

According to a press release, descendants of the enslaved men and women will be in attendance.

There will be a reflection hour and coffee break after the ceremony.

At noon, Georgetown will dedicate two campus buildings for Isaac Hawkins, the first enslaved person documented in the 1838 sale, and Anne Marie Becraft, a free black woman who established a school for black girls.

The buildings, formerly known as Mulledy Hall and McSherry Hall, were originally named for two Jesuits involved in the 1838 sale.

The event will be broadcast live online on Georgetown's website for those who cannot attend.

Boyle founded Homeboy Industries in 1988 to provide training and support to former gang members and previously incarcerated men and women, according to the organization's website. Services include tattoo removal and jobs skills training.

Meehan, an alumna of the university, will serve as interim president starting April 11 to help current president Amado Gabriel Esteban transition to his new role as president of DePaul University. Esteban will begin as DePaul's first lay president July 1.

Meehan has years of experience working in higher education and health care, including time as an administrator for Seton Hall and more than a decade as president of Alverno College in Milwaukee.

Seton Hall said in a press release that the board of regents has launched a nationwide search for the university's new full-time president.

Atchison, Kansas — The sixth annual Symposium on Advancing the New Evangelization will take place March 31 and April 1 at Benedictine College.

This year's theme, "In the World, but Not of the World: Paradigms for the Evangelization of American Culture," is based on Pope Francis' Evangelii Gaudium, a 2013 apostolic exhortation on the church's evangelization mission in the modern world.

The symposium will include Mass, lectures and colloquium sessions. Keynote speakers include Bishop James Conley of Lincoln, Nebraska; Rod Dreher, senior editor at The American Conservative; Kathryn Lopez, editor-at-large at National Review Online; and Patrick Deneen, chair of constitutional studies at University of Notre Dame. Other Catholic college professors will be presenting as well.

Those interested in attending the symposium or pre-symposium workshops must register online.

St. Louis — April 7 marks the 10th annual Fontbonne Day, when Fontbonne University will shut down for the day so students, faculty and staff can volunteer at more than 30 service sites throughout the St. Louis metro area.

"Classes are canceled so that you, our faculty, staff and students, can follow in the footsteps of our founders, the Sisters of St. Joseph of Carondelet, by serving the dear neighbor at your choice of service sites," Fontbonne president Michael Pressimone said in a press release.

The day of service will conclude in the afternoon, when volunteers convene for lunch and reflection on campus.

According to the press release, more than 250 volunteers are expected to participate in Fontbonne Day.

Milwaukee — Marquette University's Center for Peacemaking has expanded its Peace Works program to three behavioral-reassignment high schools in Milwaukee in an effort to improve students' behavior and attendance.

"It's an expansion to all of the school district's reassignment schools, and it's being used across these schools to promote conflict resolution," said Patrick Kennelly, director of the Center for Peacemaking.

The Center for Peacemaking is an academic center that focuses on promoting peace and nonviolence in the community.

Peace Works focuses on conflict resolution, social-emotional learning, and peer mediation in parochial and public grade schools. It has been working with Milwaukee Public Schools over the past couple of years.

Preview this story in our subscribers-only Catholic Education special section.

U.S. Catholic women religious founded colleges in the 19th and 20th centuries for women, especially children of immigrants, to provide equal education opportunities during a time when higher education was reserved almost exclusively for men. This was also during a time of heavy anti-Catholic bias in the United States.

The sisters' efforts helped change the face of U.S. higher education for a new generation.

If you were to chart a group of leaders before women got the vote or worked in the marketplace, "you would have at the top of that chart women religious ... they were the first women to have those roles. They led the way," said Michael Galligan-Stierle, president of the Association of Catholic Colleges and Universities.

Today, there are 104 active sister-founded colleges and universities in the United States. The women religious who are continuing their sisters' work still focus on changing and challenging the culture in which they live through each graduate.

However, they face a new task: to ensure they have created a distinctive religious heritage that can independently thrive.