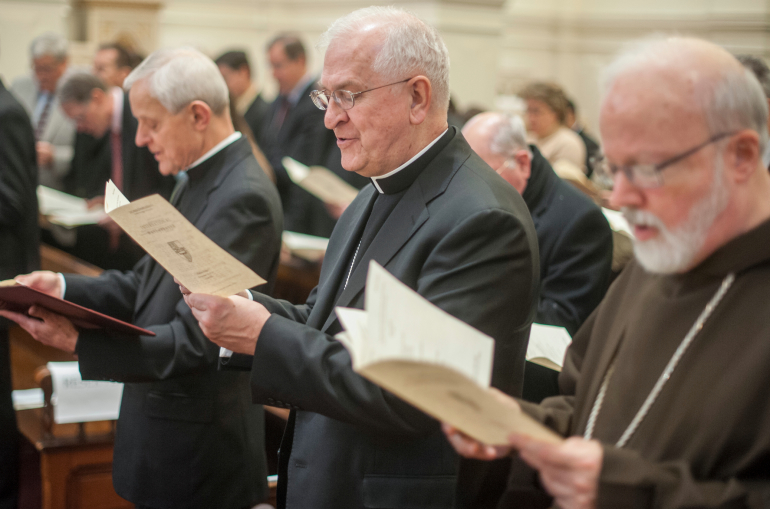 As Catholics around the world joined in Tuesday for a day of prayer to eradicate world hunger, Boston’s Cardinal Seán O’Malley said the U.S. government should not pursue cuts to food stamp programs.

Speaking at an event hosted at The Catholic University of America as part of the international “wave of prayer” organized by the Vatican’s federation of international Catholic charities agencies, O’Malley said now is “not a time to retreat” from aiding people experiencing poverty or hunger.

“Our own government is poised to cut back the food stamps and the other programs at a time when more and more people are in need,” O’Malley said in an NCR interview following a noontime prayer Tuesday at the university, held in conjunction with similar prayer events world-wide.

“Our Catholic Charities [offices] everywhere are giving out tons of food, more than ever before,” he said. “This is not a time to retreat from trying to aid the people, but to do more.”

O’Malley was referring to possible cuts by Congress to the federal food stamps program, officially known as the Supplemental Nutrition Assistance Program (SNAP). In September, the Republican-controlled House of Representatives passed a bill that would strip the program of some $40 billion in funding over the next ten years.

The Democratic-led Senate in June approved about $4 billion in cuts to the program over the same timeframe. Negotiations over the possible cuts have been ongoing this week, as Congress prepares to adjourn for its annual holiday recess.

The Catholic University event was organized in conjunction with Caritas Internationalis, the Vatican federation that on Tuesday launched a campaign called “One Human Family, Food For All.”

Caritas invited its 164 member organizations -- Catholic Relief Services in the U.S. -- and local churches to pray for an end to hunger and malnutrition, by acting on a local, national or global level against food waste and in favor of food access and security worldwide.

Pope Francis voiced support for the effort in a video message Monday, saying people should “stop thinking that our daily actions do not have an impact on the lives of those who suffer from hunger firsthand.”

With about 1 billion people still suffering from hunger today, “we cannot look the other way and pretend this does not exist,” the pope said in the message.

Among others at the Catholic University event were Washington Cardinal Donald Wuerl, who serves as chancellor of the university, and Louisville, Ky., Archbishop Joseph Kurtz, the president of the U.S. bishops’ conference.

“The bishops throughout the United States are joined in solidarity with our Holy Father,” said Kurtz in an interview following the service. “It’s extraordinary for him to give us this invitation.”

Asked if he connected the pope’s call to eradicate hunger with the pontiff’s recent critique of capitalism in the apostolic exhortation Evangelii Gaudium, Kurtz said that the pope is telling people “to see the person first.”

“Anytime we try to define someone as a consumer or even as a producer alone, we have limited the vision of what the human person is,” said Kurtz. “The Holy Father is saying is go out and see the person, walk with that person. And he calls upon economic experts to bring to bear their very best in always seeing first the person.”

“That’s the key, isn’t it?” Kurtz asked. “That we don’t lose sight of the human family in our efforts to have just economies.”

In the apostolic exhortation, known in English as “The Joy of the Gospel,” Francis said there is an imbalance between the majority of people and a minority whose earnings are “growing exponentially.”

That imbalance, the pope said, “is the result of ideologies which defend the absolute autonomy of the marketplace and financial speculation” and gives rise to a “new tyranny” in the world.

O’Malley said Tuesday’s service reminded him of a similar event he hosted at Catholic University four decades ago, when he was serving as executive director of the Washington archdiocese’s office of social ministry. To celebrate Human Rights Day, marked for recognition by the United Nations each Dec. 10, O’Malley said he had invited Dom Hélder Câmara to speak.

Câmara, a Catholic archbishop in Brazil who died in 1999, was known for his work calling attention to the plight of that country’s economically impoverished during the rule from 1964-1985 of a military junta.

During the 1973 talk, O’Malley said, Câmara said he was “here to remind everyone that human rights come from God.”

“And what can be more basic than a person’s right to have enough to eat?” asked O’Malley, who also serves among eight cardinals the pope has asked to advise him in reforming the Vatican’s central bureaucracy.

“I think the Holy Father is raising this up to help raise awareness -- he’s always talking about waste,” said O’Malley. “Those of us who live in Western countries waste so much.”

“Solving the problem of world hunger is within our reach,” he continued. “The only thing lacking is the will to do it. This [prayer service] is to help people to focus on this. Something can be done. We need to do something.”

Wuerl said he thought Tuesday’s prayer might help change people’s minds in deciding to help those who suffer from hunger.

“Prayer can change people’s hearts,” he said. “And isn’t it true that if enough hearts are changed, the world will change? And I think that’s the mission of Pope Francis. He’s saying it can be done, it really can be done.”

O’Malley and Kurtz are members of Catholic University’s board of trustees, which met in Washington Monday and Tuesday. Among other bishop-members of the board attending the prayer service Tuesday were San Francisco Archbishop Salvatore Cordileone, Milwaukee Archbishop Jerome Listecki, and Brooklyn Bishop Nicholas DiMarzio.

[Joshua J. McElwee is NCR national correspondent. He is a graduate of The Catholic University of America. His email address is jmcelwee@ncronline.org. Follow him on Twitter: @joshjmac.]