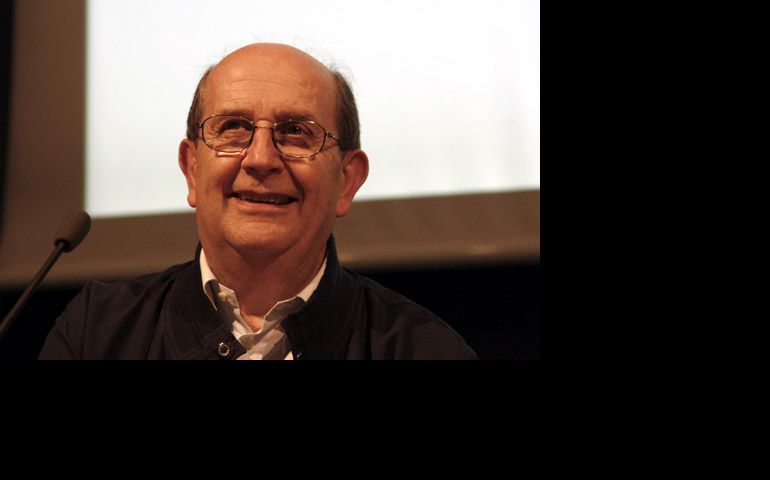 Ernesto Olivero, 72, founder of the "Youth Missionary Service" movement and the "Arsenal of Peace" in Turin, Italy

Rome — Ernesto Olivero is one of the superstars of the Italian Catholic scene, the founder of the “Youth Missionary Service” movement in 1964, known by its acronym “Sermig,” and the “Arsenal of Peace,” a former military installation in his native Turin that Olivero in 1983 turned into a center for peace-making.

Inspired by Olivero’s vision, tens of thousands of young Catholics have devoted themselves to working with immigrants, alcohol and drug addicts, people suffering from AIDS, orphaned and abandoned children, and the poor. Olivero has also played a role in conflict resolution in a variety of hotspots, including helping to negotiate a peaceful end to the 2002 standoff between Israeli forces and Palestinian gunmen at the Basilica of the Nativity in Bethlehem.

In 1997, Pope John Paul II gave Olivero the title of “faithful friend of all the abandoned children in the world.” He's probably one of just a handful of people in the world to have received formal honors from both an Arab government (Jordan) as well as Israel for his peace-making and charitable activity.

On Dec. 2, Olivero, now 72, published an essay in L’Avvenire, the newspaper of the Italian bishops conference, reflecting on Pope Benedict XVI”s new rules for Catholic charities, which call bishops to exercise greater vigilance over both Catholic identity and financial transparency. The rules were issued yesterday in the form of a motu proprio, a legal document, called “On the service of charity.”

The following is an NCR translation of Olivero’s essay.

"Good must be done well,” as the old saying goes. Italian author Ignazio Silone once had Pope Celestine V say, “To achieve good ends, there exist only good means.” [Note: Ignazio Silone was the pen name of Secondino Tranquilli, an early socialist who fought with the Italian Communists against the Nazis during the Second World War. He later broke with Stalinism and devoted himself to writing novels and essays.]

This idea is valid also for the service of charity, especially if it’s done in the name of Jesus.

From the beginning of our adventure, I understood that it was indispensable to adopt a clear line on this point, in particular regarding the administration of funds that people give us so that we’ll transform them into bread, homes, medical cures, schools, and other forms of support for the neediest.

There are many temptations, and one can’t compromise. For that reason, Sermig immediately chose to have a transparent balance sheet. Everyone must be able to see where the money in our hands comes from, and where it goes. Within the limits of the law, we respect the wishes of whoever wants to donate to us anonymously, but we’re always willing to make an account to the responsible authorities. The only exception, obviously, is the cash deposited by unknown persons in our poor boxes. Even these, however, are administered with respect for the highest norms of accountability.

If someone of dubious reputation wants to make a contribution to us to ease their conscience, we invite them to make restitution to the persons who were damaged by their conduct.

I’m happy that the pope, with this motu proprio, has clarified the importance of both the transparent administration of funds on the part of charitable organizations, and the necessity of maintaining a free hand with regard to conditions [placed on donations] which are at odds with Christian principles. I’m also pleased with what he says about salaries and administrative expenses, which sometimes can seem disproportionate for funds which are supposed to be used for charitable ends.

For our part, we believe that charitable activity in the ecclesiastical realm should mostly support itself, through both donations and volunteer work.  At the Arsenal of Peace in Turin, we have one employee for every twenty volunteers. We also decided to keep our expenses for administration separate from those for charity. The former are supported mostly by income from small commercial activities and from grants by both public and private entities, whereas the latter are funded by personal contributions from ordinary people. This policy allows us to guarantee that every single contribution will be entirely used for the purpose for which it was given.

Such clarity has to be achieved anew on every occasion. Let me explain. Shortly after the disastrous flood of 2000, together with youth from all over Italy, we set off to help the different neighborhoods of Turin that had been hit.  Often, after we dug their house out of the mud, the people who lived there took out their wallets to give us something in thanks. Our youth, however, had precise instructions. They were not to accept any money personally, but to invite people to make an offering to the Arsenal of Peace, where it was possible to indicate what the money would be used for and to receive a formal receipt. That policy reinforced the trust that people had in the youth, and in us.

It’s the same philosophy as to why our volunteers pay their own expenses, so that a free gift remains truly free.

I also thank the pope for his invitation to “a witness of Christian sobriety.” Charity begins with our style of life, which must never create a barrier between those who give and those who receive. At my fraternity, I repeat every day: We’ll  never fail because we stay poor and available, because we live by prayer, and because we publish our balance sheets.