Clergy calm tension on the streets of Ferguson 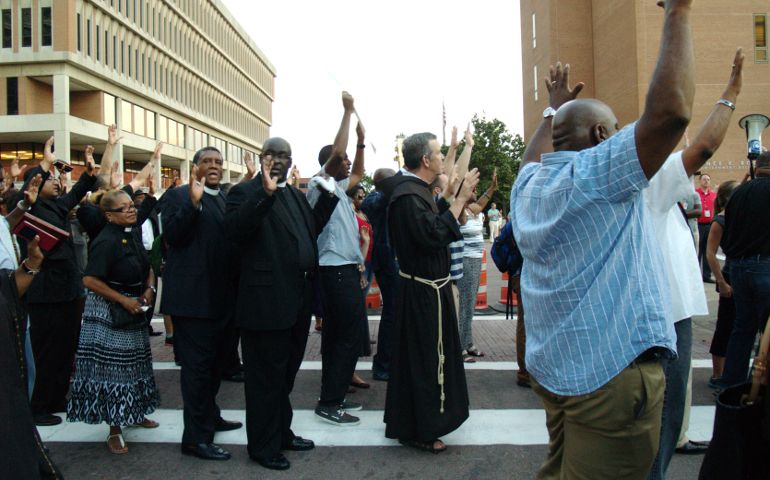 Ferguson, Mo. — Clergy and religious leaders from many cities and many faiths are joining their local counterparts in Ferguson, Mo., becoming an increasingly visible presence and calling for justice while working to calm tension on the street.

On Wednesday, a group of around 100 religious leaders gathered at a community center in Clayton, Mo., for a half-mile march to the office of St. Louis County Prosecutor Bob McCullough to deliver a statement. The group is seeking an expedited grand jury hearing and the arrest of Ferguson Police Officer Darren Wilson, along with the assignment of a special prosecutor to the case. On the way, the group echoed the phrase that has been a central part of the story in Ferguson, “Hands up, don’t shoot!”

Gathered in front of the prosecutor’s office, clergy and community leaders called for justice and transparency in the investigation of the shooting of Michael Brown by Wilson on Aug. 9. “We are deeply concerned that the people of St. Louis county have been systematically denied due process of the law because of race,” their statement read. The leaders called for people of all races to work together to end injustice, saying that they were gathered “to demonstrate that this is not just something that affects the African-American community.”

Following the march, the group returned to Ferguson to join other demonstrators. At Greater St. Mark Family Church, community organizers with People Improving Communities through Organizing and Communities Creating Opportunity briefed ministers and members of the clergy in strategies for dealing with tear gas and ways to handle confrontations with the police. Once on the streets, the leaders walked with protesters and helped maintain order. Several pastors acted as mediators between police and protesters when tensions rose.

The same evening, St. Louis Archbishop Robert Carlson celebrated a special Votive Mass for peace and justice at the Cathedral Basilica in St. Louis. In his homily, Carlson called for honesty and acknowledgement of the harms of racism.

“In the face of brokenness and shame and heartbreak Jesus calls us to come to him and encourages us so that we do not walk away,” Carlson said. “The time has come for us to acknowledge decades of hurt and mistrust and suspicion and prejudices and, yes, even a tragic death.”

The Mass also included a prayer by the ecumenical Ferguson Ministerial Alliance, a group of local churches that have been coming together for prayer gatherings and food pantry assistance to the community.

Clergy calm tension on the streets of Ferguson

The path through Ferguson

Trusting the police: another racial divide