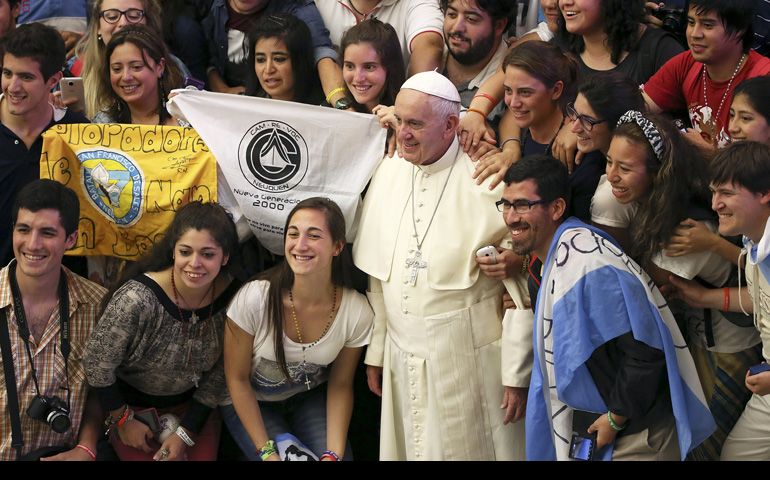 Pope Francis poses for a photo with Argentine youths during his weekly audience in Paul VI hall at the Vatican Aug. 19. (CNS/Alessandro Bianchi, Reuters)

Pope Francis has again strongly criticized an aspect of the global market system, warning that the search for profit margins often "takes hostage" family life and even considers families themselves obstacles to better worker productivity.

In his weekly general audience Wednesday, the pontiff also warned that placing profit at the center of all work life causes a "discouragement of the soul" by forcing laborers to scorn all life attachments.

"The modern organization of work sometimes shows a dangerous tendency to consider the family an obstacle, a weight, a liability, for the productivity of work," Francis told thousands gathered in Paul VI Hall for the audience.

"But we ask: Which productivity?" he continued. "And for whom?"

Francis was speaking Wednesday as part of a series of reflections he has been giving in his general audiences on different aspects of family life. He focused this week's reflection on the relation between the family and work, which he called "sacred."

In reference to both the Genesis story of creation and to his new encyclical Laudato Si', the pontiff said care for the earth's beauty and the dignity of work "were made to be joined together."

"The two go together," said Francis. "The earth becomes more beautiful when it is worked by man."

"The civil life spoils and the habitat goes to ruin," the pope said. "And the consequences damage most of all the poorest and the poorest families."

Francis also warned Wednesday against those who hire workers but then feel free to discard them "according to economic convenience."

"The family is a great testing ground," said the pope. "When the organization of work takes it hostage, or even blocks the path, we can then be sure that the human society has started to work against itself."

"To work -- I repeat, in a thousand ways -- is truly of the human person," said Francis. "It expresses his or her dignity of being created in the image of God. For this we say that work is sacred."

"And for this the management of work is a great social and human responsibility that cannot be left in the hands of a few or dumped on a deified market," he continued. "To cause a loss of places of work means to cause a grave social damage."

Francis closed his remarks by calling on Christian families to take up the "great challenge" to show what he called a fundamental bond between care for creation and the dignity of work.

"The lost of these fundamentals is a very serious matter, and in the common home there are already too many fissures," said the pope.

"The work is not easy," he said. "Sometimes it can look ... like David in front of Goliath; but we know how it goes at the end of that challenge! It takes faith and craftiness."

Greed for wealth is behind wars, conflicts, pope says