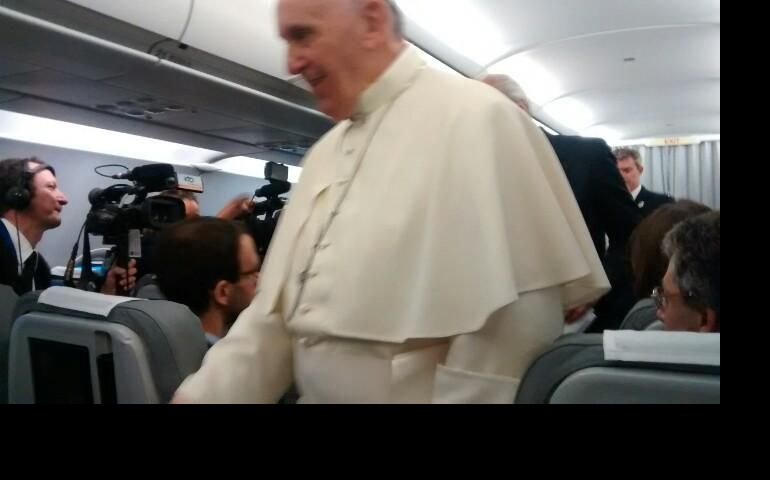 ABOARD THE PAPAL PLANE FROM SARAJEVO — Pope Francis has said he expects a Vatican decision on the reported apparitions of the Virgin Mary at Medjugorje to come soon and that he and the prefect of the Congregation for the Doctrine of the Faith had spoken on the matter just last week.

Speaking in a brief press conference on the return flight from his one-day trip to the Bosnian and Herzegovinian capital Saturday, the pontiff also said he expects the decision to give "orientation to bishops" on the matter.

The visions at Medjugorje, a town on the southwest border of Bosnia and Herzegovina, have long been controversial. In 2013, the Vatican congregation told U.S. Catholics they were not allowed to participate in events that would give "credibility" to the claimed apparitions.

Answering a question on the status of the investigations Saturday, Francis said Ruini had come to him to deliver the final report of the commission. The pope then said he and Cardinal Gerhard Muller, the Vatican congregation prefect, had spoken on the matter recently. Muller and the Vatican congregation, Francis said, had discussed the matter at a very recent meeting, somewhere around the last Wednesday in May.

"We are there to make a decision," said the pontiff. "They want it just to give some orientation to bishops."

Francis' answer on the Medjugorje matter came at the beginning of a very brief press conference for the pontiff, who made a whirlwind one-day tour of Sarajevo Saturday with eight meetings in just 11 hours in the city.

The day wrapped up with several intense encounters, including testimonies from priests and religious who shared harrowing tales of the pain and suffering of Catholics during the 1992-95 Bosnian War.

Addressing tens of thousands during a morning Mass at the city's Olympic stadium, Francis urged those in the country's three main ethnic groups -- Croats, Serbs, and Bosniaks -- to work daily for peace.

The pontiff touched upon that issue again during the press conference, saying simply: "It is not sufficient to speak of peace."

"To speak of peace only and not make peace is a contradiction," said Francis. "Who speaks of peace and favors the war -- for example, with the arms trade -- is a hypocrite."

On the plane, the pope was asked about his meeting with young people in Sarajevo, during which he criticized how some people have become too "joined" to their computers and do not spend time with families or in social settings.

"The virtual language is a reality that we cannot deny," said Francis. "We have to bring it to the good path so that it is a progress of humanity."

"When this brings us out of the family, of social life, of sport, of art and we remain joined to it, it becomes a psychological sickness," he said.

The pope also criticized television programs that he said are "empty, without worth" and may be relativistic, hedonistic, or consumerist.

Francis was referring to his eagerly anticipated encyclical letter on environmental issues, which the Vatican says is to be released June 18.

The fantasy of 'Mad Max: Fury Road' and the prophecy of 'Tomorrowland'