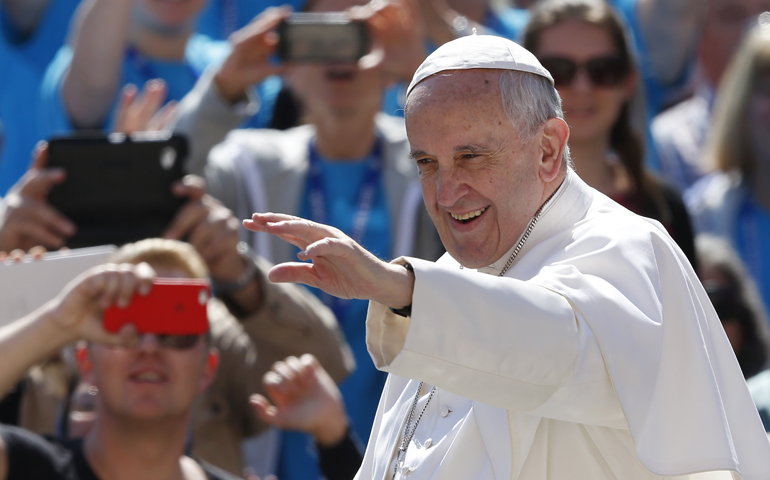 Pope Francis greets the crowd during his general audience in St. Peter's Square at the Vatican May 18. (CNS/Paul Haring)

Reflecting on the Gospel parable of the suffering a rich man endures after death for not helping a poor man who had lived outside the door of his home, begging for food, the pontiff said: "God's mercy toward us is tied to our mercy towards our neighbors."

"If I do not throw open the door of my heart to the poor, that door remains closed, even for God," said the pope, speaking to crowds in St. Peter's Square. "And this is terrible."

The pontiff was reflecting Wednesday on a parable found in Luke's Gospel, where both a rich man and a poor man die. The poor man, named Lazarus, is "carried away by angels to the bosom of Abraham." The rich man, left unnamed, is described as being in the netherworld and left "in torment."

The rich man asks Abraham to have Lazarus give him water, but Abraham replies that the man had received "what was good" during his lifetime "while Lazarus likewise received what was bad."

Francis said that "Lazarus represents well the silent cry of the poor of all times and the contradiction of a world in which immense wealth and resources are in the hands of a few."

"The poor and the rich die; they have the same destiny, like all of us," said the pontiff. "There are not exceptions to this."

The rich man, said the pope, "did not show any consideration towards God and instead made himself the center of everything, closed in his world of luxury and wastefulness."

"Excluding Lazarus, he did not account for in any way the Lord or the Lord's law," said Francis. "He will be condemned not for his wealth, but for being incapable of feeling compassion for Lazarus and helping him."

"As long as Lazarus was outside his home, there was the possibility of salvation for the rich man -- throw open the door, help Lazarus -- but now that both are dead, the situation has become irreparable," said the pontiff.

"To convert ourselves, we must not wait for exceptional events, but open our hearts to the word of God, that calls us to love God and our neighbor," said Francis. "The word of God can re-enliven a dried-up heart and heal it of its blindness."

"The rich man knew the word of God, but did not let it enter into his heart, did not listen to it, and therefore was not capable of opening his eyes to have compassion on the poor man," said the pope.

"No messenger and no message can substitute the poor that we encounter on the journey, because in them you come to meet Jesus himself," said the pontiff, quoting from Jesus' words in Matthew's Gospel: "Amen, I say to you, whatever you did for one of these least brothers of mine, you did for me."