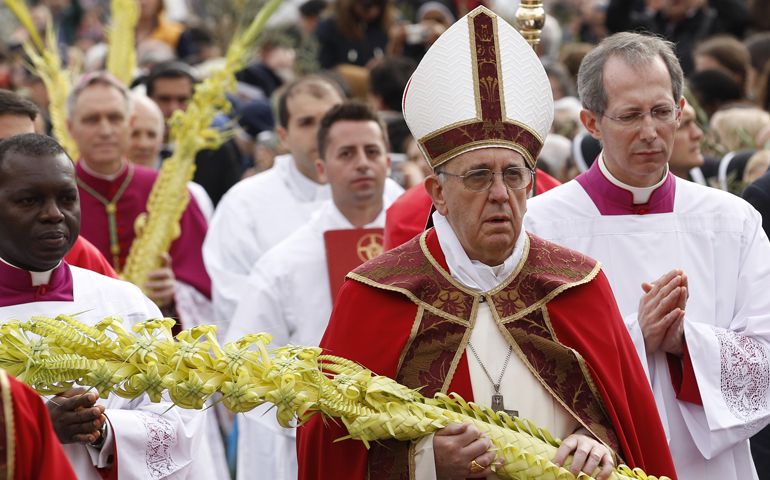 Pope Francis carries woven palm fronds as he walks in procession March 24 at the start of Palm Sunday Mass in St. Peter's Square at the Vatican. (CNS/Paul Haring)
This article appears in the Pope Francis feature series. View the full series.

Rome — In another context, these words could easily be the opening paragraph of a magazine essay about popular reaction to the early days of Pope Francis.

"Crowds, celebrating, praise, blessing, peace: joy fills the air. [He] has awakened great hopes, especially in the hearts of the simple, the humble, the poor, the forgotten, those who do not matter in the eyes of the world. He understands human sufferings, he has shown the face of God's mercy, he has bent down to heal body and soul."

Instead, they're taken from Francis' homily this morning for Palm Sunday, reflecting on the entry of Jesus into Jerusalem.

Of course, that scene of popular acclaim was followed by the death of Christ on the Cross. One wonders if it struck Francis this morning that the acclaim surrounding the honeymoon phase of his papacy might give way, sooner or later, to a similarly painful denouement.

Francis led the Palm Sunday liturgy Sunday morning in St. Peter's Square, marking the opening of the annual Holy Week observances of the Catholic church. The liturgy came a day after Francis traveled to Castel Gandolfo to visit his predecessor, Benedict XVI, who presided over these same ceremonies a year ago.

In terms of a news flash, the main headline out of this morning's Mass was that Pope Francis publicly confirmed that he will travel to Rio de Janeiro, Brazil, this July for the World Youth Day festival. That commitment was already on the calendar, but this is the first time Francis has said personally that he's planning to go.

Speaking to a large crowd of youth in St. Peter's Square, Francis said he'll see them again this summer.

"I look forward joyfully to next July in Rio de Janeiro!" the pope said. "I will see you in that great city in Brazil!"

Francis organized his homily in terms of three key words extracted from the gospel accounts of Holy Week: Joy, Cross, and Youth.

Francis said that Christians must be people of joy, but it's a special kind of joy based not on emotion or worldly contentment, but on the encounter with Christ.

"Do not be men and women of sadness: a Christian can never be sad!" he said.

"Ours is not a joy that comes from having many possessions, but from having encountered a Person," he said. "We accompany, we follow Jesus, but above all we know that he accompanies us and carries us on his shoulders."

In terms of the Cross, Francis said that Jesus was a unique kind of King who came not to rule in the usual sense, but to take upon himself the weight of the world's sins.

In our time, he said, there's still plenty of sins for Christians to confront.

"Let us look around: how many wounds are inflicted upon humanity by evil!" he said. He cited "wars, violence, economic conflicts that hit the weakest, greed for money, power, corruption, divisions, crimes against human life and against creation!"

In addition to those social sins, he said, there are also personal shortcomings, pointing to "our failures in love and respect towards God, towards our neighbor and towards the whole of creation. "

"Jesus on the Cross feels the whole weight of the evil, and with the force of God's love he conquers it, he defeats it with his resurrection," Francis said.

Regarding youth, Francis called upon Christians to have a youthful spirit in confidently embracing the Cross and carrying it "through all the Continents, along the highways of the world," making disciples in the spirit of Christ's injunction to his disciples.

As is his style, Francis departed from his prepared text at various points, looking up and making direct eye contact with the large crowd in St. Peter's Square to underline key points, such as the hope that comes from an encounter with Jesus. Repeatedly he intoned the Italian word speranza, "hope."

One such off-the-cuff addition was a quote from an address given by Pope Benedict XVI to the cardinals: "Yes, you're princes," Francis recalled Benedict saying, "but of a crucified king." At another point, he cited a saying from his own grandmother about the impermanence of wealth: "A shroud doesn't have pockets."

Today's Mass was an opportunity for the world to get further insight into the personality and the mind of the new pope. Another comes tomorrow in Italy with release of the Italian edition of a book by then-Cardinal Jorge Mario Bergoglio titled "To Heal from Corruption," reflecting ideas the future pope developed during Argentina's economic crisis in the 1990s.

In the book, the pope reflects on the spiritual roots of corruption, decrying it as a spirit of false triumphalism built upon "shortcuts of opportunism, [taken] at the price of his own dignity and that of others."

Corruption is built on the lie, the future pope writes, "that it's not me" – and the worst part, he wrote, is that the corrupt person "often ends up believing it."

In a sense, then-Cardinal Bergoglio wrote, corruption is the worst kind of sin, because sinners at least may harbor the hope of forgiveness. The corrupt person, however, has no such hope, because he or she doesn't feel the need for forgiveness.

A corrupt person, the future pope wrote, does not know either friendship or fraternity, only complicity.

In that sense, he wrote, corruption is a missionary enterprise, constantly drawing to draw others into the web of complicity. The idea is not so much to lure people into committing specific sins, he wrote, as to become caught up in a network of sin.

One interesting note is that although the book is mostly focused on corruption in politics and the economy, the future pope warns that it's a temptation in every walk of life, including within the church.

At a time when many observers are wondering how Pope Francis will resolve open questions about Vatican finances, including the Vatican Bank, his strong anti-corruption stance may be a telling indication of where he plans to go.