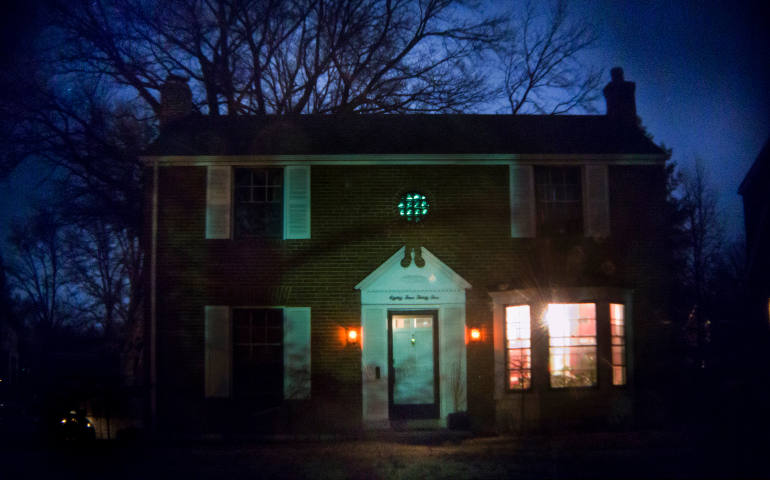 A paranormal team will peform a purported exorcism on live television Oct. 30 in this Bel-Nor neighborhood in St. Louis. The St. Louis archdiocese has warned against the event, saying it "“trivializes this ancient rite” and along with it, “the very real danger of evil.” (CNS photo/Jim Lo Scalzo, EPA)

A TV network hopes for a fright. The St. Louis archdiocese fears a farce.

On Friday night, the cable network Destination America will broadcast what it has called “the first-ever live exorcism” on the airwaves. According to the network, “Exorcism: Live!” will involve the rite performed not a possessed person, but on the suburban St. Louis home that inspired the 1973 film “The Exorcist.”

In 1949, Jesuit priests conducted an exorcism upon a 14-year-old boy, often given the pseudonym “Roland Doe,” over a two-month period. At first beginning in Washington D.C., the rite eventually moved to St. Louis, where it took place at various points on the St. Louis University campus, in an area hospital (since demolished), and at a relative’s home, which remains occupied (not by the same family) and has become a destination for fans of the film and its backstory.

In a promo for the show, paranormal investigator Nick Groff calls the Doe exorcism “one of the most documented possessions of all time,” and said the house itself ranks among his top-five sinister locations he’s visited around the world.

“Something is lurking there, something is stained within the floorboards, within the wood of the building, the foundation, the soil. That whole land has this stain, this mark of something that dreaded this individual way back when … It’s waiting there to attack somebody else who’s going to come in and open themselves up,” Groff said.

The local Catholic church, though, has emphasized caution with the made-for-TV event. In a press statement released Thursday, the St. Louis archdiocese stated that an exorcism cannot take place without the authority of the local Roman Catholic ordinary, and that Archbishop Robert Carlson has granted no such faculties to anyone involved with the televised exorcism.

“Any attempt to use the solemn Rite of Exorcism as entertainment exposes all participators to the danger of future hidden satanic attack,” Auxiliary Bishop Emeritus Bishop Robert Hermann said in the release. “We cannot play games with Satan and expect to win.”

The U.S. bishops’ conference define an exorcism as “a specific form of prayer that the Church uses against the power of the devil.” It lists two forms of exorcism: minor exorcisms, which are aimed at breaking the influence of evil or sin in a person's life, with one set of such prayers used in preparation for baptism; and major exorcisms, which in contrast, can only be performed by a bishop or a priest with faculties for the purpose of expelling demons or liberating a person from demonic possession.

Among the “Exorcism: Live!” 12-person team is Archbishop James Long of the United States Old Catholic Church, which describes itself as a subset of the Catholic church that separated from the Roman Catholic church in the late 1870s over the issue of papal infallibility.

Long, who studied to become a Roman Catholic priest before opting for the U.S. Old Catholic Church, is the founder of the Paranormal Clergy Institute. His bio states he has performed 27 documented Solemn Rite of Exorcisms on possessed persons, and hundreds of minor rite exorcisms on demonic entities which have overtaken a home or building.

The St. Louis archdiocese warned that purported exorcisms performed for the sake of entertainment by spiritualists, paranormal investigators or non-Catholic clerics “trivializes this ancient rite” and along with it, “the very real danger of evil.”

Writing for the archdiocesan newspaper Oct. 21 on exorcisms, Fr. John Mayo said that demonic possession, while “indeed quite rare,” does occur and, in those instances, the church continues to conduct exorcisms. Before the rite is performed, Mayo said, an extensive investigation reviews the alleged possessed person’s history, including a psychological evaluation.