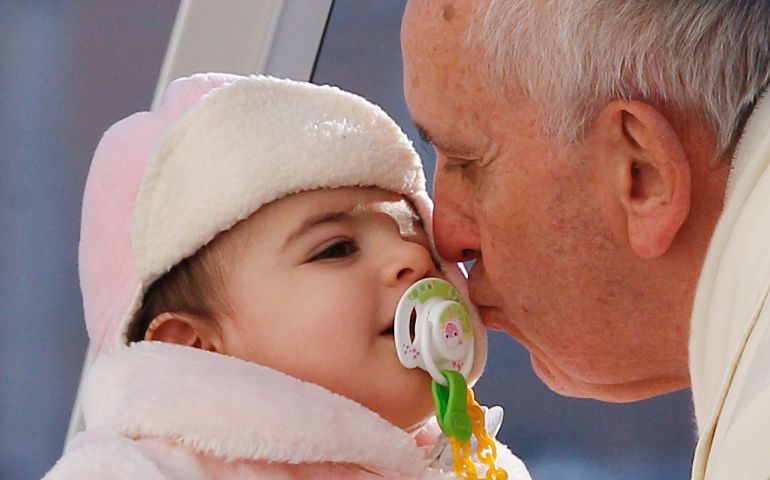 Pope Francis kisses a baby during a general audience in St. Peter's Square Dec. 18, 2013. March 13 marked the fourth anniversary of the Argentine cardinal's election as pope. (CNS/Paul Haring)
This article appears in the Four Years of Francis feature series. View the full series.

My heroes are not kings. Or presidents. Or popes.

For one thing, I am more apt to embrace female role models; but beyond that, as someone who naturally questions authority, I tend to be suspicious of anyone in power. And as a feminist Catholic, I rarely find support for that cause from bishops, the Vatican or popes — even Pope Francis, who despite his less hierarchal style, is less open on women’s issues than on other ones.

So, it’s true that I have been slow to join the Francis Fan Club, even admitting during the conclave that part of my spiritual journey has involved getting to a place where I don’t let what a pope does, or doesn’t do, bother me too much.

But, four years into this papacy, the election of a very different kind of leader to the presidency of the United States has enkindled in me a newfound appreciation for our spiritual leader.

I can only imagine the despair I might be feeling if both the church and the current political majority were attacking the issues about which I care deeply at the same time. Instead, reports from Rome are a welcome antidote to the news from Washington.

It’s clear that, on many issues, the content of their remarks and priorities couldn’t be more different. But their styles also are polar opposite. Trump, flashy and bombastic, is self-centered to the point of narcissism. Francis is humble in both words and action, performing some of his most selfless acts away from the media spotlight.

Some, including Catholic author James Carroll, have called Francis the “anti-Trump.” Writing in the The New Yorker in February, Carroll asks “Who would have thought that, on an elemental point of liberal democracy, the United States could take instruction from the white-robed man in Rome?”

An article a month later in The New York Times poses the Francis-as-anti-Trump headline as a question rather than an assertion, but comes to a similar conclusion. Author Austen Ivereigh contrasts the two populist leaders and concludes that Francis is “a bridge maker in an age of wall building” and notes that “in part because [the pope] anticipated the current political crisis long before it happened, his Greek-chorus commentary on the upheavals matters.”

People | How Donald Trump has helped me appreciate Pope Francis

Pope Francis on abuse -- a disappointment