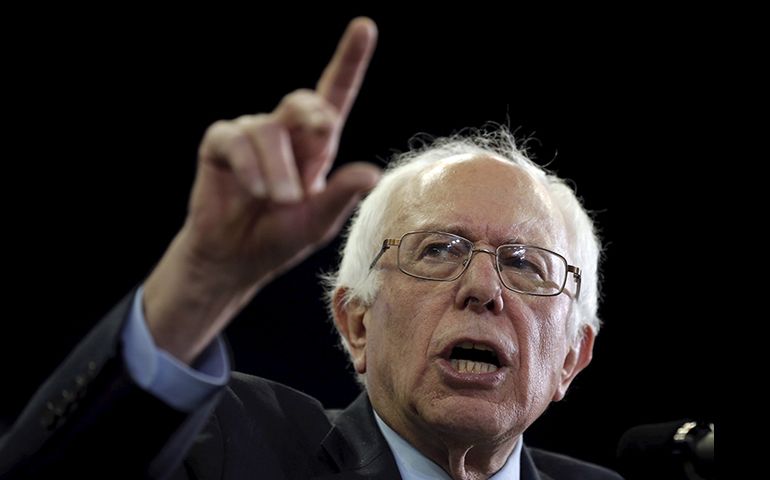 Candidates for national office often get scrutiny for their charitable giving. Much was made of Sen. Barack Obama giving less than 2 percent to charity. His running mate, Joe Biden, gave just .2 percent 10 years ago. Hillary Clinton gives more in charity on paper, but much of it is to her own foundation.

Republicans, though generally less concerned with poverty, are also terrible at giving. Between 2006 and 2010, Ted Cruz gave less than 1 percent to charity. The latest information we have about John Kasich is that he gives less than 2 percent. Trump also apparently gives a tiny percentage, relying instead on outside donations given in his name.

What about Bernie Sanders? His central message is that those with resources must pay "their fair share" to support those who have less. Surely, then, Sanders must be dramatically outpacing the other candidates when it comes to giving.

But despite being in the top 4 percent of U.S. earners and living in relatively cheap Vermont, Sanders gave a mere 4 percent of his income to charity. Furthermore, his effective tax rate was a mere 13.5 percent. This is less than Mitt Romney, who was roundly criticized for paying a low percentage in taxes.

Unless we learn more from Sanders, which might put these numbers in a different context, he is a victim of his own critique: He is not paying his fair share.

Sanders recently visited the Vatican and claimed to support Catholic social teaching. That teaching insists wealth exists to be shared, and that as a matter of justice our excess resources should go to the impoverished.

The social teaching of Judaism has also insisted that giving to the poor is a matter of justice. Indeed, both Judaism and Christianity have traditionally taught that a minimum of 10 percent of one's income must go to the needy.

Of course, one need not be religious to come to this conclusion. Princeton's Peter Singer, though perhaps known to most religious people for his views on life issues, first became famous for his views on our duties to the poor. A secular Jew who has railed against religious traditions, Singer nevertheless insists that giving to the poor is a strict ethical requirement. In my research for a book I wrote on his work, I discovered that he also used 10 percent as a moral requirement.

Again, there may be mitigating circumstances. Sanders' children have long since become adults, but perhaps he is helping his grandchildren in various ways.

He may have given to charities and not deducted the money. Perhaps there is a large medical (or other) bill that hurts his ability to help the needy. It would be good to hear from Sanders about such circumstances, and also get information on previous returns to use as a means of comparison.

Any of these reasons could explain why he isn't paying his fair share. But here are three that won't do the trick.

There is no question that government has a huge role to pay when creating a society in which everyone pays his or her fair share. The debate will continue with regard to how much, and in what ways, that role might be expanded.

In the meantime, however, the great remaining need of the most vulnerable must be filled by charities. And those charities need resources. From us.

Yes, Bernie Sanders: We should be willing to feel the pain as well.

Politics | How Sanders' charitable giving may undermine his central message

Novena for Pentecost: Day one