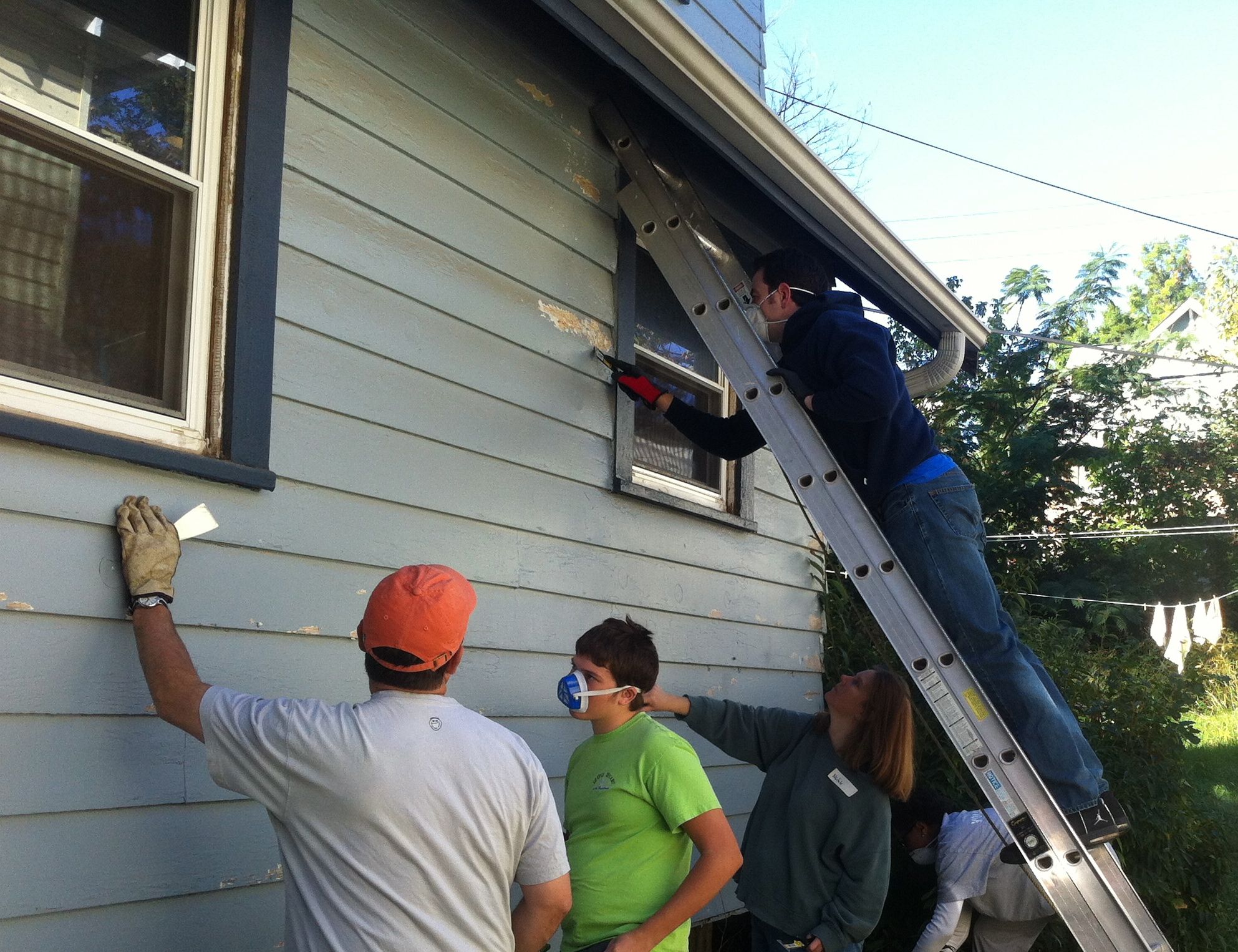 Exterior painting was common on the list of needs

More than 5,000 volunteers, including 300 union workers, fanned out through neighborhoods here Saturday to renovate and beautify homes for low-income owners -- at no cost to them.

The organizing group, Christmas in October, this year celebrates its 30th year of volunteer work, drawing from approximately 60 parishes, civic groups, clubs, fraternities, sororities, unions and local businesses, and its 8,000th home renovation. It is the leading volunteer organization focused on rehabilitating the houses of low-income homeowners in the Kansas City area.

Christmas in October is the brainchild of two local Knights of Malta, Dick Miller and John McMeel, who remain actively involved. Both were on hand walking up and down Brooklyn Avenue on the east side of Kansas City on Saturday. McMeel was all smiles, greeting enthusiastic early-morning volunteers showing up in work clothes.

A few minutes later, Miller was giving directions to a truck driver distributing fresh doughnuts to those who had come out to work. Miller paused and said, "Who would have imagined it would grow into something this large?" Three of his grown children -- including Steve, who is on the NCR board of directors -- their spouses and three grandchildren hovered close, preparing to take on the renovation of a home just down the street.

"My children were only so high," he added, holding his hand a belt level, "when we began doing these homes."

The Christmas in October story, the latest chapter of which involves 200 home renovations this month, began in 1983. That's when Miller and McMeel were inducted into the Knights.

It wasn't long after that the two men -- Miller, the attorney, McMeel, the co-founder of Andrews McMeel Publishing -- worked with some Knights in a home renovation project in Washington, D.C. On the plane trip home, the men talked about setting up a similar program in Kansas City.

With union, business, civic and church contacts, they set out to begin home renovations for those more or less trapped in poverty with no way out. They focused on the elderly, the disabled, and low-income home owners. The idea took off and began to draw the support of a host of Kansas City organizations. Especially helpful have been several unions, including a plumber's, an electrical and a pipe-fitting union. Hundreds of skilled and thousands of amateur volunteers turn up two Saturdays in October to repair houses. Owners' names come through parishes and neighborhood groups. They fill out forms and are interviewed by Christmas in October staff. Needs are assessed.

It's no small undertaking. Over the decades, the organization has installed no fewer than 1,500 furnaces and 1,200 water heaters. It's built more than 250 wheelchair ramps to allow the trapped elderly to enter and leave their homes. Safety needs are high on the list when houses are considered and identified.

At 75, Kathryn Trigg lives alone in Kansas City, where she has spent decades of her live. In the last 10 years, however, her legs have weakened. Meanwhile, her Social Security checks, which keep her going, have not kept pace with inflation.

In addition to putting new rails on the steps leading down from her porch and some plumbing work in her bathroom, Christmas in October volunteers installed a new furnace. Last year, she said, her gas furnace began to leak. The gas company shut it down. She could not afford a new one. After her neighbor told her about Christmas in October, she applied and was chosen to be one of the 200 homes being renovated this year.