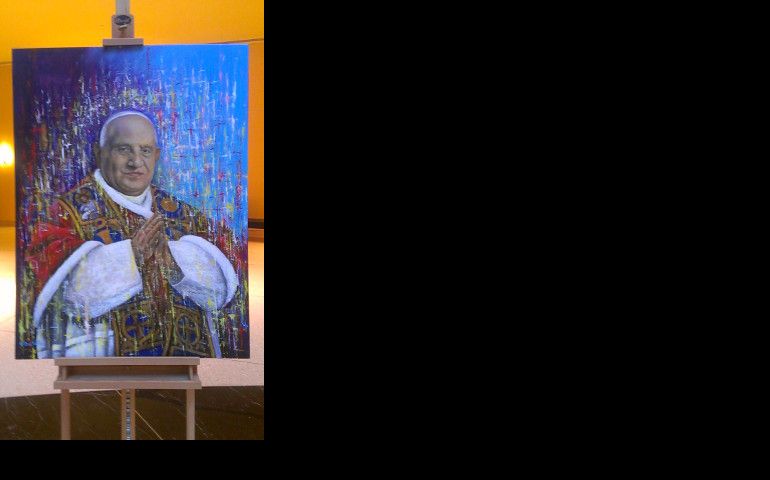 Washington — The Catholic prelate responsible for spiritual care of the members of the U.S. armed forces around the world was honored Wednesday with a lifetime achievement award from a group hoping to open a new museum dedicated to Catholic art.

Archbishop Timothy Broglio, who heads the Archdiocese for the Military Services, USA, received the award at a fundraising gala for the museum at the Italian embassy Wednesday evening.

Accepting the award from Msgr. Walter Rossi, the rector of Washington's Basilica of the National Shrine of the Immaculate Conception, Broglio said he felt it was an "unmerited honor" and praised the work of chaplains in the armed services.

Mentioning chaplains who died in the line of service like Maryknoll Fr. Vincent Capodanno during the Vietnam War, Broglio said he continues to be "deeply impressed" by the work of U.S. chaplains.

Broglio was honored by the National Museum of Catholic Art and Library, a Washington-based organization that is raising funds to open a new museum dedicated to Catholic art in the nation's capital.

A similar museum, run under the aegis of the same organizers, had been located in New York City until 2009, when it closed amid some controversy over its funding practices and unclear connection to the New York archdiocese.

On display at the event were some pieces of art that might be featured at the new museum, including a full-scale marble replica of Michelangelo's Pietà and dramatic and colorful paintings of Popes John XXIII, John Paul II, and Francis by artist Luis Peralta.

Among attendees at the event were Italy's ambassador to the U.S., Claudio Bisogniero, and Prince Lorenzo Maria Raimondo de Medici, a direct descendant of the Medici family, who were Michelangelo's key patrons.

Calling Flynn a "good friend," Nicholson said the former mayor "stands up for the truth and he stands up for the church" sometimes "at personal expense ... in this rough and tumble world of partisan politics."

Speaking of his time as the U.S. ambassador at the Vatican, Flynn said his fondest memory was helping people who wanted to meet Pope John Paul II.

Other honorees at the event included:

The archdiocese for the military services, which has no cathedral, maintains a chancery office in Washington and has jurisdiction where U.S. federal or military personnel serve.

Broglio has been its archbishop since 2008, serving before then mostly in the Vatican's diplomatic corps around the world and as the personal secretary of former Vatican Secretary of State Cardinal Angelo Sodano.