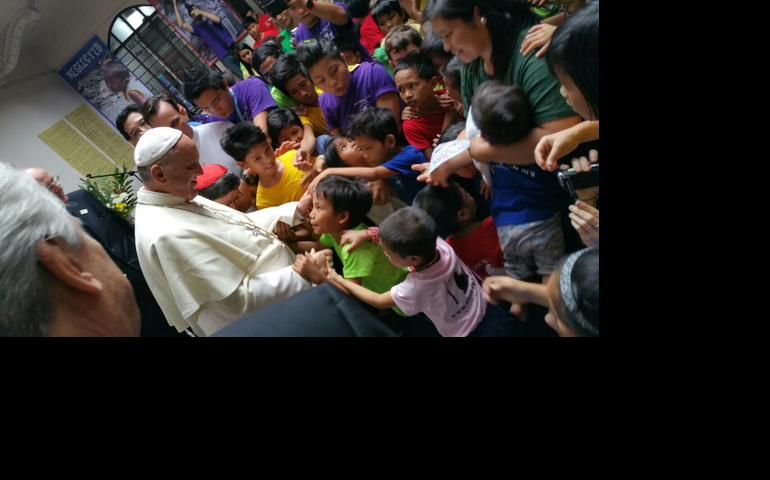 The latest from Pope Francis in Asia: Francis to Philippine government: Stop the corruption To bihsops and diplomatic corps, Francis makes strong case to defend family values which are "under attack from powerful forces which threaten to disfigure God’s plan for creation and betray the very values which have inspired and shaped all that is best in your culture,"

In the streets of Manila, crowds jostle to catch a glimpse of "Lolo [Grandfather] Pope."

Trying to clarify pope's "I'd punch him in the nose" statement: Vatican dials back pugnacious pope

Read all NCR coverage of the pope's trip: Francis in the Philippines and Francis in Sri Lanka

Duke Chapel To Allow Muslim Call To Prayer The chant will sound for three minutes at a "moderately amplified" level to announce the Jummah prayer service, held Friday afternoons in the chapel basement.

'Industrialized' Ocean a Looming Threat to Marine Life "Shrimp farms are eating up mangroves with an appetite akin to that of terrestrial farming, which consumed native prairies and forest."

Your chuckle for the day: A Florida sheriff's office is sending back some official rugs after an embarrassing typo in them put the rug company in the doghouse.

Spiritual, but not religious

United States to give $3.5 billion for food aid