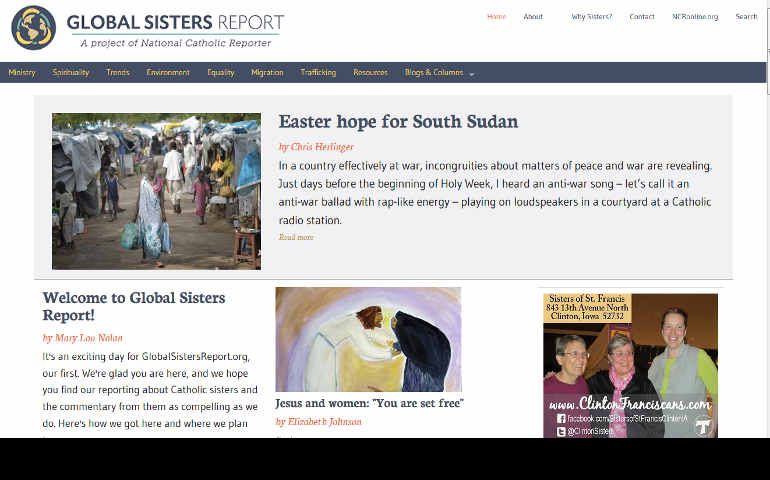 Global Sisters Report, NCR's reporting project dedicated to telling the stories of women religious around the world, is now live at GlobalSistersReport.org.

The project's semiofficial slogan, "Reporting on and giving voice to women religious around the world," describes the aims of the project. NCR is building a global network of journalists to report the stories of the sisters, their ministries and the people they serve. At the same time, women religious will write columns, reflections and their own first-person accounts of their work and mission.

Writing about the project in her launch day message to readers, managing editor Mary Lou Nolan says, "Catholic sisters are skilled, educated, committed agents of change. They engage the world through Gospel values. They live community in ways that disrupt common thinking. Telling their stories and helping them tell their own stories, on a journalistic platform, will be eye-opening."

This groundbreaking project is made possible by a grant from the Conrad N. Hilton Foundation, which has a special focus on Catholic sisters as agents of social change.

The project is a natural extension of NCR's mission. Since its founding in 1964, NCR too has had a special relationship with women religious. The first volumes of NCR dedicated two pages in each issue to The Sisters' Forum, which had a slate of sister editors and columnists who assigned stories and carried on discussions about issues of importance to women religious as renewal of church moved from the Second Vatican Council to the parishes, hospitals and schools where the women worked. Though women religious never faded from the pages of NCR, the need for a dedicated sisters' forum did fade as the issues the women were dealing with became issues of the wider church and not just religious communities.

I hope you will follow us on that journey.

Vatican questions to American nuns ... (and some answers)

'The Zookeeper's Wife' is uneven but inspiring