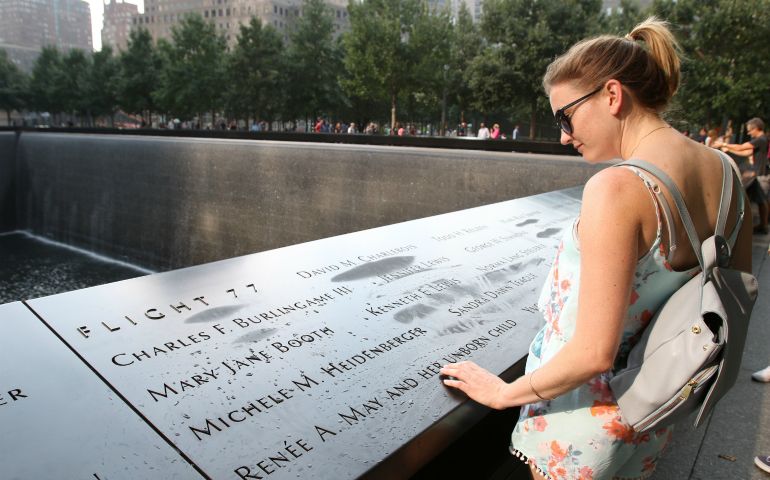 A woman reads the names of people killed in the Sept. 11, 2001, terrorist attacks at the South Pool of the 9/11 Memorial in New York City September 2015. (CNS photo/Gregory A. Shemitz)

Sunday marks a significant anniversary for the U.S. -- the 15th anniversary of the Sept. 11 attacks. For some, like new high school freshmen, the attacks are merely a historical fact, occurring before most were even born. Others see Sept. 11, 2001, as a marker of time, ushering in two new distinct time periods: pre- and post-9/11.

For those hoping to find solace in the Catholic Mass, J. Michael McMahon has made some suggestions for liturgists to honor the range of feelings that surround the anniversary. McMahon, the music editor at Celebration, wrote a feature piece reflecting on Sept. 11 and spoke to NCR about his thought process behind planning a Mass that focuses both on the Gospel and the somber mood surrounding the day.

The first step is turning to the Gospel and other Scripture for guidance.

"I always try to tune myself to the Scripture of the day and to really hear the word of God, not just in a cognitive way but in a way that is holistic and sort of evokes both content and feeling and life direction," he said. "I mean the words are important, but I think the words are primary. Words express more than ideas, they also express a response to what God is saying too."

Upon reading this year's Scriptures, McMahon realized that the readings will be the same as those on the Sunday after the attack.

"I can remember how struck I was when I opened the lectionary after that day and realized the next story we were going to hear -- the story about the lost sheep and the lost coin and the prodigal son -- and the juxtaposition of the incredible mercy of God going out to people in their pain and in their need," McMahon said.

But the important message is the theme that ties each reading together. McMahon believes that the theme is integral to both the Mass and anniversary.

"The readings of the day can easily be summed up in a single word: mercy," McMahon wrote in Celebration. "The Gospel reading is perhaps the strongest proclamation of God's mercy in Luke's entire narrative. … God's compassion for the lost, as portrayed in the stories of the sheep, the coin and the son, extends far beyond what human beings would consider reasonable or appropriate."

This theme runs deep through the readings, the Gospel and the psalm of the day, Psalm 51. McMahon said that this theme should continue in the music.

"The coincidence of the Sept. 11 anniversary with these powerful lectionary texts provides liturgy planners, homilists and especially musicians with an opportunity to draw communities into a celebration that includes both lament and mercy; remembrance and gentleness; anger and compassion," wrote McMahon, adding, "Music, more than any other form of expression, helps to give expression to such a deep cry from the soul."

McMahon sees music as a tool that helps "people to enter into the action of the liturgy and to evoke what's being proclaimed during the Word." He offered a few suggestions for those looking to enhance their experience through music starting with a "raw" hymn written in the wake of Sept. 11 by Carl P. Daw's Jr., titled "When Sudden Terror Tears Apart."

He also suggested a song by Jesuit Fr. Paul Nienaber called "We Stand in Hope," a more contemporary account of the feelings surrounding the day. In honor of the 15th anniversary, World Library Publications is allowing parishes to download the song for free online.

Honoring the tragedy is also acknowledging that Sept. 11 was not a one-time event, but ushered in a time of war, uncertainty and terrorism.

"The Gospel ultimately is calling us to let go of life anyway," McMahon said. "Ultimately the way to life is through death. And so I think we are always proclaiming that we are embracing the cross and that it is our hope. God is with us in this. The message of the cross is that human beings are not left alone in this, God weeps with us. God invites us to show mercy, just as God shows mercy."

McMahon said that it's important not to lose sight of the people in the congregation on Sunday.

"I think one of the opportunities this occasion presents us with is to remind us that the planning has to have a real pastoral aspect to it," he said. "In other words, who are the people coming that are coming to the liturgy today and what's in their hearts today, what are they bringing with them?"

"On this occasion particularly, I think we're all coming with a collective sense of memory and a lot of emotion that a lot of us are sharing," he added. "It's complicated, there's a lot of different emotions swirling around, but I think one of the great things of this occasion is you can kind of count on a very large number of people who are bringing many of the same kind of feelings, remembrance and grief, anger and pride at the country, gratitude for the people who gave so much that day."

[Kristen Daniels is an NCR Bertelesen editorial intern. Her email address is kdaniels@ncronline.org.]

What happens when religion becomes devoid of spirit and awe?

20 years after 9/11, remembering the legacy of Fr. Mychal Judge