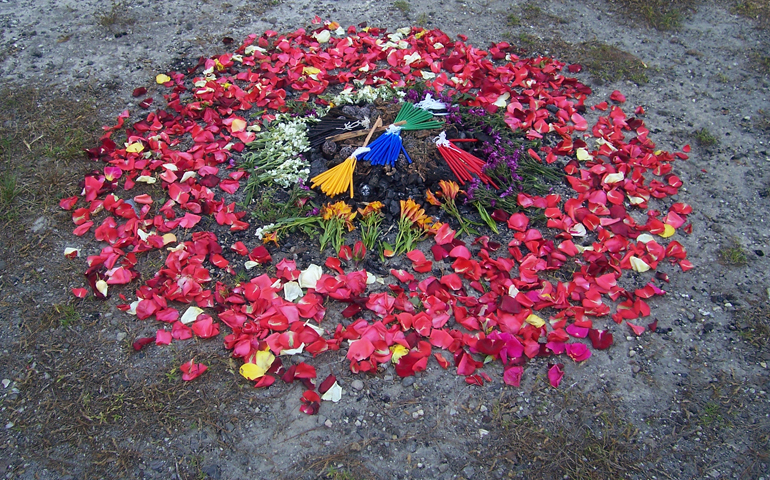 The fire pit set for a Mayan prayer service

We -- Sisters of Loretto and Sisters of the Holy Family in Guatemala -- were at a retreat center near Guatemala City, gathered in an open space surrounded by small green tropical plants. One sister began building a fire in the middle. She added flowers at the edge, then another sister sprinkled rose petals around the outside of the fire area.

This set the stage for a Mayan prayer service, a ritual with roots that go back thousands of years. And the Sisters of the Holy Family with whom I am staying here in Guatemala have no problem participating in this ritual. Indeed, they value it and join in with pride for their indigenous heritage.

It was a very participatory service. We sat in a circle, and each offered her hopes for the future and prayers for her family, for the community, for the sick, or for justice and peace in Guatemala -- whatever was on her mind and in her heart. In Catholicism, we call this "prayers of the faithful."

After offering prayers, each sister threw into the fire a set of multicolored candles she received before the service began. At various times, the sister leading the service stirred the fire to keep it burning. The fire, the flowers, the candles -- we Catholics often name such symbols of a larger spiritual reality "sacraments."

As with many indigenous rites around the world, blessings were offered toward all four directions, north, south, east and west, and we faced each direction as we prayed.

The sister who led this particular service made clear that she is not a Mayan priestess, but she said her grandmother was one. Evidently, this indigenous tradition has no problem with women leading religious services in a priestly role. The Catholic hierarchy has much to learn here!

The whole service took about an hour and a half. The sisters tell me it was short for typical Mayan services, which often take three or four hours.

Most fascinating was the fact that these sisters, like many Guatemalans, freely mix Christianity and the Mayan tradition with no problem. They value both. And in this particular ceremony, there was no contradiction between the two. Indeed, our Catholic love of sacramental liturgy would be right at home here!