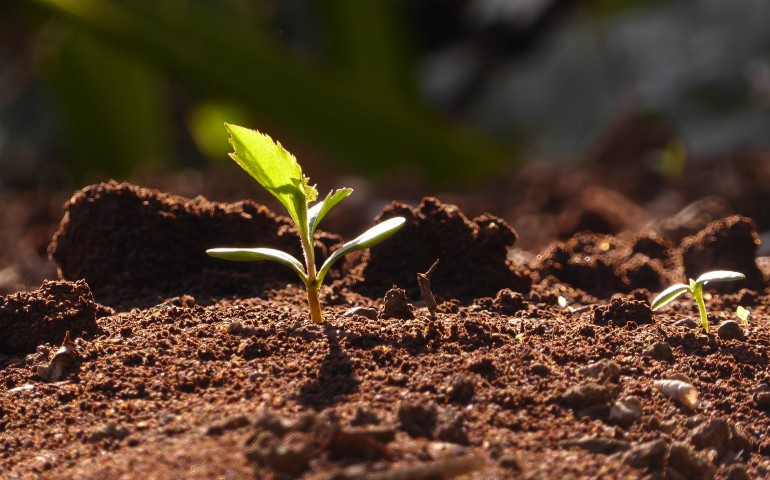 Why did Jesus speak in parables? In part, it surely put everyone in his audience on equal footing. The learned had no better access to his riddles than did the simple, and in this case, farmworkers had the head start. The disciples were among the curious who learned how to wrangle a special advantage. When they didn't know what it meant, they could ask the storyteller himself. To them, Jesus gave an explanation of each phase of this story. But, because it is a parable, there will be more than even his explanation tells us on first hearing.

Apparently then, when Jesus said, "Whoever has ears to hear, ought to hear," he was not saying that they had to comprehend what he said. The real requirement was that they must want to understand more than they did. When it comes down to it, we know that those who think they have a firm grasp on something will usually be the least likely to enter into genuine dialogue. We can hand it to the disciples in this instance for being humble and caring enough to ask.

Jesus explained the parable to them, summarizing the fate of his teaching about the kingdom of heaven by describing four ways people responded to his message. Some folks simply don't understand, and the evil one robs them of the little they might have grasped if they had bothered to ask. Others are originally delighted with a Gospel of prosperity, the miracles and great dinners that everyone loves, but take away the carte blanche and they can't find it in themselves to pay the price. Then, there are those who from the beginning have been in it for the prestige; before long the desire to get ahead or to guarantee their fortune chokes the little life there was in their fledgling faith. Finally, Jesus says there are those who hear and understand and bear fruit to such a degree that even the very least of them enjoys a miracle harvest.

It really isn't such a good record. Jesus didn't talk about quantities, but his story indicates that he had something like a 25-percent success rate. That's pitifully far below a failing grade. But today's Scriptures put two caveats on that lack of success. One comes from Isaiah's reflection on the word and the other from the very nature of seed and harvest.

Isaiah proclaims that the word of God is as effective as the rain or snow; it always produces results. That certainly cannot mean that the word of God always brings conversion, otherwise, our world would not be as it is. Isaiah is talking about God's word as a word of dialogue. He's saying that the God of Judeo-Christianity desires and initiates relationship with creation. Our God speaks to us in our own tongue inviting us into communion.

Once heaven reaches out to Earth, the horizon has changed and Earth can never be the same. The coming of the word of God invites humanity into the possibility of relationship with God, something that no person can achieve on her or his own. Whether or not we accept the offer, the possibility will forever be there. As with an open window cut in what used to be a solid wall, we need not go through it, but everything is different because we could. That is Isaiah's message: Once the word of God has come, nothing is the same.

Then, although Jesus explained the details of the parable, it remains a parable, a teaching with more to it than meets the eye. A parable never fits in one simple lesson plan. What he left unsaid had to do with the future of the miraculous harvest.

We can assume from the type of sowing that the seed was grain — fruit would entail a different process. What happens when grain is harvested? It becomes, as Isaiah said, seed for the sower and bread for the hungry. The success of Jesus' sowing, even with only a small portion coming to fruition, is astounding and ongoing. Every disciple who has ears to hear must realize that there is a vocation involved in fruitful hearing. Those in whom the word has taken root are called to be seeds for the next sowing and grain to feed the hungry.

Jesus' parable about sower, seeds and soil invites us to think more about what happens to us when we hear the word of God. Isaiah tells us that the word comes as an invitation to allow God to permeate our life as water saturates soil. Jesus promises that if we allow the seed of the word to grow in us the results will be incalculable. The parable tells us to keep listening and asking because there will always be more.