Women find self-esteem, worth in crochet thanks to sisters' ministry 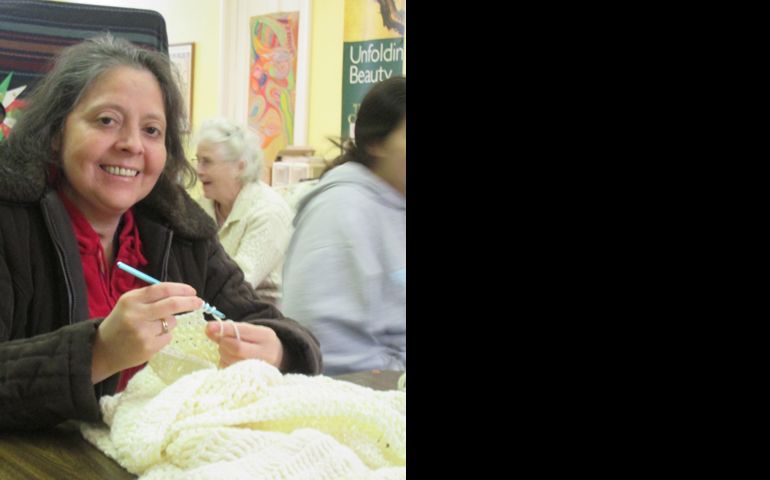 "Mary" comes to the Women's Outreach Center "because it's therapy for me. When I'm here, I'm not thinking about bills or my car. I just come and enjoy."

"I lost my job, lost my house, and lost my children to children's services. I was homeless and a former drug addict, but I'm clean and sober for five years now, and I have my own apartment."

This is just one of the life-changing stories told to me by "Jane" (not her real name) when I visited a remarkable sisters' ministry on a Tuesday afternoon several weeks ago. The Women's Outreach Center was founded by four Cleveland communities of women religious in 2004. Three or four afternoons a week, women who are transitioning out of homelessness or trying to avoid it altogether meet in a comfortably furnished rented space at a Protestant church on Cleveland's near west side. They tell their stories, crochet, write poetry and, among many other things, receive job preparation skills. But the most important of all is that "they gather to create and share that which gives them life and hope," says co-founder St. Joseph Sr. Carrie Vall.

Another woman, "Beth," tells me: "I was on the way to being homeless, I was losing my job when I came. I was scared, I didn't know what was expected. They're Catholic, I'm not Catholic. But it didn't matter. They made it fun. I did lose my house, but I got an apartment and I'm OK. I got through it, and this group helped."

Beth now volunteers by teaching crocheting at Colman Court, a subsidized housing complex located on the grounds of a local Catholic church noted for its service to the marginalized.

What makes the Women's Outreach Center so unusual is that the sisters and volunteers use arts and crafts, especially crocheting, as a way of building community and self-esteem among women struggling to transition from shelters to permanent homes. (Full disclosure: The center is a sponsored ministry of my own Congregation of St. Joseph through our River's Edge spirituality center.)

It all began in 2002 in a homeless shelter, where St. Joseph Sr. Felicia Petruziello was providing counseling services to struggling women. Vall and Notre Dame Sr. Patti Gentile wanted to help out. Vall was studying to be an art therapist and Gentile, a counselor. They asked and received permission to do their internships at the shelter under Petruziello's supervision.

An estimated 80 percent of the women at this particular shelter had some type of mental illness, including drug and alcohol abuse. Many bore the scars of childhood abuse and neglect. As adults, they were victims of rape and domestic violence. A large percentage grew up in foster care, group homes and juvenile facilities.

"One of the first things that struck me was how they seemed to wall themselves off. Their self-esteem was ravaged, as one might expect," Vall said. Feeling vulnerable, the women tended to become more and more isolated, finding it difficult to trust anyone.

The two therapists-in-training began offering art and counseling sessions specifically designed to build self-esteem and enhance socialization. Though the sessions were popular, "what the women really wanted to do was crochet," Vall said. Because she knew nothing about crocheting, Vall enlisted the help of her mother and her mother's friends, who came and taught the women. The therapeutic benefits were more far-reaching than anticipated.

"Crochet had a calming, centering effect," Vall said. "The women began sitting in groups as they crocheted. They began approaching others, whom they normally ignored, to ask about and admire the work they were doing." Another benefit she noted was enhanced self-esteem, as the women realized they could create something that was both beautiful and functional and see it through from start to finish.

While the counseling and crocheting outreach to homeless women were popular at the shelter, Vall and her sisters quickly observed a revolving-door effect. Even though women succeeded in moving out of the shelter and into their own apartments, too many returned, often after only a month of independent living.

"They had no support network," Vall said. Experts point to the transition period between shelter and apartment as a very vulnerable time. Meaningful daytime activities are crucial to the newly independent individual's stability.

Vall, Petroziello and Gentile decided to found the Women's Outreach Center to provide these crucial daytime services and a network of support. They sought and received financial and hands-on ministerial support from four Cleveland religious orders: the Congregation of St. Joseph, the Sisters of Charity of St. Augustine, the Sisters of the Holy Humility of Mary, and the Sisters of Notre Dame.

But maybe Jane says it best: "This is a safe haven for me, where I feel comfortable and can share my inner thoughts and give back. I like to help people with their crocheting. We make blankets for the babies at Metro [MetroHealth Hospital], hats and scarves for refugees, and Head Start."

"The love and prayer that goes in to the [crocheted hats] means so much," Vall said. "The women work like crazy making hats, shawls and scarves, and then hand them off without ever knowing where they land."

The women's outreach ministry has since expanded its creative and holistic program to include several other shelters and drop-in centers in Cleveland. Jane, who has been a part of the center almost from the beginning, now teaches other women to crochet at several sites.

The sisters' dream 10 years ago of helping women in transition find community and meaningful activity seems to have been realized, at least in the lives of the women I met on my visit that Tuesday afternoon.

"Mary," who just recovered from a three-month life-threatening hospitalization at the local county hospital, said: "I come because it's therapy for me. When I'm here, I'm not thinking about bills or my car. I just come and enjoy. This is like a family. That's a good feeling. I go home refreshed like a new person."

"This is the way you touch women," Petruziello said: "The arts help them find their center, their heart, their souls. They learn to develop self-reliance, and that means everything."

I close with a poem written by one of the women, "Cathy":

Loving and caring and sharing.
Not judging, just living and
Willing to help each other.

Reaching and loving,
What a place to be.

| Women find self-esteem, worth in crochet thanks to sisters' ministry

We must make room for all the lenses in our church

And the desert shall bloom

The Friday morning poker club and its ordinary saints

For US sisters, ordinary Catholics made a way where there was no way