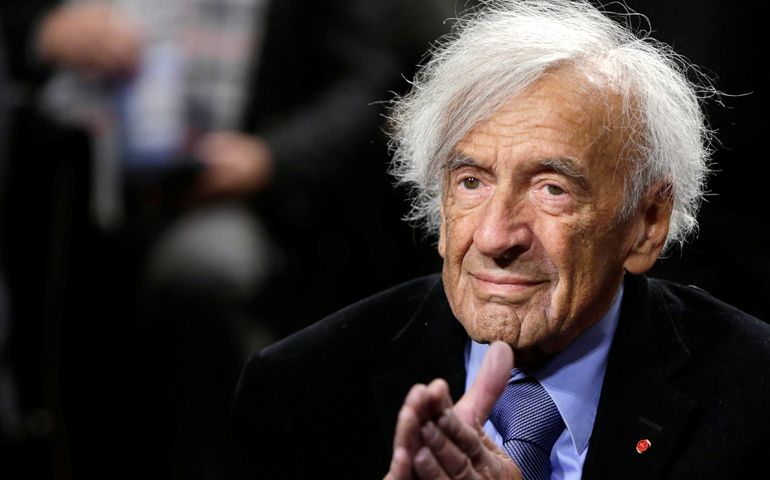 He was a robust moral voice in a confused, tentative age desperate for such north stars.

But what struck me after reading summary accounts of his life is that his own story of surviving Nazi Germany's attempt to murder all the Jews of Europe was just one among many, and certainly wasn't even the most interesting.

What made Wiesel's story so widely known and so compelling was his remarkable ability to describe it in memorable ways in his book Night and other venues and in the countless speeches he gave.

And yet, as I say, there are many other survival stories equally or more astonishing than Wiesel's. I learned that in detail a decade ago when I began what would turn out to be about four and a half years of work on a book about such survival that I wrote with Rabbi Jacques Cukierkorn.

In our book, They Were Just People: Stories of Rescue in Poland During the Holocaust, we tell the stories of more than 20 people who somehow managed to avoid Germany's death sentence on them by getting help from non-Jews, which in Poland means mostly Catholics.

What we discovered, however, is that only rarely did those who helped to save Jews do so for religious reasons. Rather, they helped because often they already knew the Jews who asked for help. They were neighbors, say, or customers.

Beyond that, these non-Jewish Poles had to overcome the long, deep history of anti-Judaism that the church had taught almost from the time that Christianity finally separated itself decisively from Judaism.

But, in the end, they did what was right. They put their own lives at risk and made the list of six million dead Jews just a bit shorter than it otherwise would have been.

And what stories the survivors had to tell us.

Maria Devinki, for instance, lived for more than two years under the floor of barns in Poland and eventually wound up a real estate investor and philanthropist in Kansas City.

Felix Zandman hid with four or five other people some 17 months in a small pit under the bedroom of a house in Poland. After the war he earned his Ph.D. from the Sorbonne in Paris and founded Vishay Technology on the basis of his many patented scientific inventions.

Fr. Romuald Jakub Weksler-Waszkinel was, as a baby, given to a Catholic family, and he didn't discover that he had been born a Jew until 12 years after he had been ordained a Catholic priest -- against his parents' wishes. He's still one today.

Feliks Karpman found a family to hide and save him and, after the war, married one of that family's daughters, Marianna.

Zygie Allweiss was in a truck with many other Jews headed to a rural site where the Germans planned to shoot them all after they had dug their own mass grave. But Zygie slit the canvas back of the truck's covering and, at just the right moment, slipped out and rolled into a ditch. He and his brother Sol wound up being hidden by a farm family they had known before the war -- a family Zygie and his by-then grown daughters eventually reconnected with.

It's exactly these survivor stories, coupled with the terrible reality of the six million who died, that Elie Wiesel spent his career begging people not to forget.

"I remember, May 1944," Wiesel wrote. "I was 15-and-a-half, and I was thrown into a haunted universe where the story of the human adventure seemed to swing irrevocably between horror and malediction."

And out of that brutal universe came a man who would not let the rest of us forget. One way to honor his memory is to remember our own capacity for evil.

'The Decent One': Documentary on Himmler a compelling contribution to Holocaust filmography