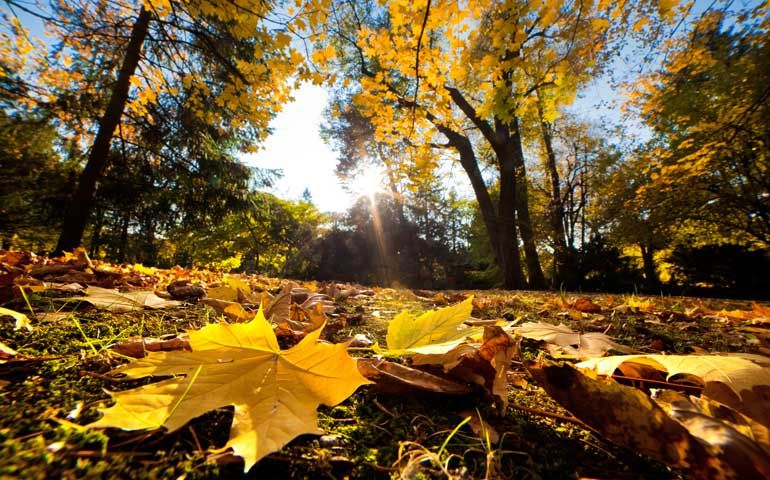 Every October, a dozen of my classmates -- St. Mary of the Lake Seminary, 1966 -- gather again to give ourselves a two-day retreat. Nine of us left the priesthood a long time ago to marry. One of the stalwarts who remained is Morrie, now the bishop of Paris, Kan. Morrie and I are ambling around the lake like we did many times in the '60s, watching squirrels jump from branch to branch and leaves tremble yellow and gold.

"Remember, Morrie, when you and me and Ed and Charlie played soldiers in the woods?"

"Yeah, Ed used to bury himself under a ton of leaves like Rambo. He didn't show up for supper one night and we had to get a posse and search for him."

"No. We only had an hour of free time before we had to go back to our rooms. Remember how the smokers would smoke as many cigarettes as they could because you could only smoke after meals? The rec room looked like Los Alamos."

"And if you walked around the lake with the same guy too often, Fr. Fitzgerald would warn you about having a particular friendship. It wasn't till I was 40 that I figured out what he was talking about."

"Yeah," Morrie says, "I thought a particular friendship meant you couldn't have a best friend. A priest was supposed to be like the Lone Ranger or the Curé of Ars, who was a friend to those who have no friend and a member of all families but a member of none."

"You're thinking of Boston Blackie."

We walk in silence and let memories run through our minds like deer in an enchanted forest. Then Morrie speaks, in a softer tone: "Remember -- it was maybe 50 years ago -- we had 10 years in, only two to go, and Malachy Foley called you and me into his rector's office and said we couldn't be priests in Chicago because our parents were divorced."

"I'll never forget it," I say. "I was called in before you. He said it would cause scandal to the faithful. I told him that in the minor seminary Msgr. Howard told me about the rule and that it was wrong, but I shouldn't worry because when I got ordained it would all be different."

"What did Mal tell you?"

"I was so unhappy," Morrie remembers. "I didn't want to be a priest some place where I didn't know the streets."

"I was crushed but I still wanted to be a priest and make people happy. When I got home that Christmas, I checked in with my pastor. I asked him where he thought I should apply. He was furious. He got on the phone and called up Mal and yelled: 'Don't you ever say anything like that to this boy again and don't you dare say anything bad about his mother, you hear me? She's a good Catholic and her son will be a priest in Chicago!' "

"Don't. I can see Paris from my back porch."

We stop at the little red brick bridge with black lanterns at the halfway point and watch the water ripple toward the distant chapel atop a hill. "Morrie, why did you choose to go to Paris, Kan.?"

"Well, to tell you the truth, it had a lot to do with that commie newspaper you write for, the National Catholic Enquirer."

"I know. 1964 -- 50 years ago maybe to this day -- that's when it began. They had these inspiring stories about parishes doing wonderful things during the council. The newspaper was in Kansas City, so I said, 'I'll be a priest in Kansas.' "

"Kansas City is in Missouri."

"Still is. And I'm the pastor of Paris. Haven't missed an issue of NCR since."

"You know," I say, "looking back on that experience with Mal makes me think about what Steve Hazard was talking about this morning."

"You guys are always talking about your grandchildren. Nobody cares."

"He quoted Nelson Mandela, when he was leaving prison, something like, 'As I walked toward the gate that would give me freedom, I knew if I didn't leave my bitterness behind I'd still be in prison.' I've forgiven Msgr. Foley many times over the years for a lot of things, but still feel a burn in my gut when this one comes back up."

Morrie turns to me. "It's time to stop forgiving him. You've done your 70 times 7. It's time to forgive yourself for not feeling it. Nobody's perfect."

A cool October breeze whips up and blows a whirl of leaves across our ankles. I look past Morrie into the woods. "I see the forest," I tell him.

[Michael Leach lives in a forest in Connecticut and is grateful to be a Mundelein man.]

Spirituality | Bishop Morrie has a remembrance of things past

Our parishes would thrive if we stand up and be leaders