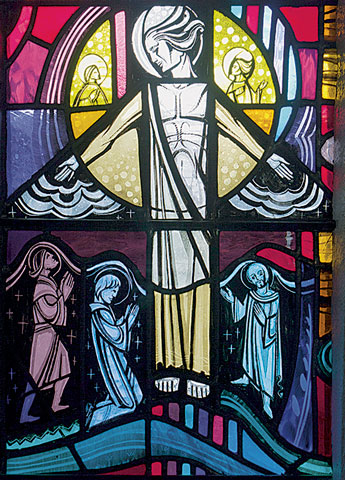 It's 7:30 a.m. I look in the mirror and see the face of Tommy Lee Jones in the last scene of "Lincoln." My wrinkly, bald head looks like a cracked egg. Bags slump under my eyes and roll across my cheeks like the Himalayas. Where did it go? Was it ever there? No matter.

I droop back into the bedroom and look at Vickie lying on her back like a mummy, her hands crossed over her chest. She looks like Boris Karloff. I don't care.

I pick up the July issue of Give Us This Day from the nightstand and take it with me to the rocking chair by the window. It's a sunny morning but my head is cloudy. I sit down and open the monthly. It's time for some inspiration. An epiphany perhaps. A transfiguration. I could use one.

Today's reading is about the burning bush. I've always liked that one. First it's just a bush. Then it's fire. God fills Moses' mind with light. Reminds me of the time Thomas Merton was standing on a street corner in downtown Louisville, Ky., and the light of a transfiguration blew him away. All of a sudden, Louisville wasn't Louisville anymore. The city glowed.

"There is no way of telling people," he said, "that they are walking around shining like the sun. ... There are no strangers. ... The gate of heaven is everywhere."

In the movie "Field of Dreams," a visitor asks the hero, Ray Kinsella, "Is this heaven?"

That must have been the apostles' experience when they climbed the mountain with Jesus and all of a sudden Jesus was no longer Jesus and his whole appearance changed and his clothes blazed like lightning and Moses and Elijah appeared next to him in splendor. The disciples had been sleepy, but now they were awake and Peter said, "Lord, it is good that we are here. We're going to build shrines for you and Moses and Elijah."

The Bible then says, "Peter didn't know what he was talking about." So like us. He was trying to capture the experience and it was like trying to grab the wings of a butterfly that lands on your shoulder and watching it fly away. A cloud covers the mountain and it's all over. But Peter would never be the same.

I think of moments in my life when mountains were no longer mountains and rivers no longer rivers. Standing on the corner of Central Park West and 72nd Street, waiting for a bus after seeing my shrink and hearing, really hearing for the first time, that I didn't have to get people to like me, I was God's special child, and then seeing, really seeing, peace in the midst of chaos, harmony in one bus going this way, another that way, beauty in a cup of coffee spilled along the curb, love appearing as everyone everywhere.

I was silent with gratitude. It was a moment not unlike that Merton or Peter experienced. One of those moments when you can see the veins on the leaves of trees a block away, and all the planets and all the people and all the squirrels are just where they're supposed to be. Transfigurations don't happen on mountains or street corners. They happen in us. I've never seen Central Park that way again, but I've never been the same again either.

I think of less dramatic transfigurations in my life: sitting with a group of old people whose memories are few and realizing that God sees each of them as he created them, as his perfect child; or sitting in my rocker reading a spiritual book and my eyes get wide and I know what I need to know without needing words. The book drops from my hands and I am at peace. At least for a while. I wish I could have one of those moments now. Give Us This Day is still in my hands.

I'd like to be like the Zen fishmonger who after his transfiguration still peddled fish and still smelled of fish, but when his friends asked, "What's so great about your life now?", he answered, "Well, everything is exactly the same as it was before, except that now wherever I go, the dead trees come to life."

I look out the window at what might be an emerald forest but see only the same old trees. I'm still the Zen seeker for whom mountains again are mountains and rivers are rivers. So it goes.

I get up and lay the book on the nightstand. Vickie is awake and she sees my face and smiles. Boris Karloff never looked so good.

[Michael Leach is the editor of many books, like A Maryknoll Book of Inspiration with Doris Goodnough.]

A version of this story appeared in the July 31-Aug 13, 2015 print issue under the headline: I could use a transfiguration.