A leper's dance of gratitude 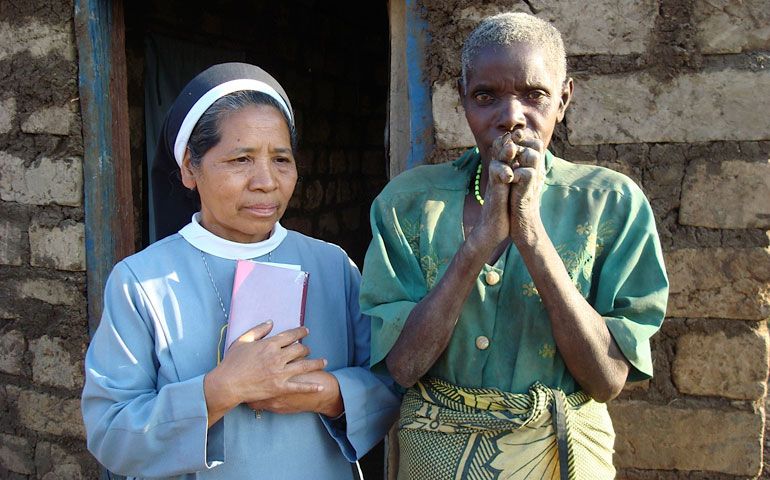 During my nine trips to Tanzania, I have met many women and men with leprosy, but none touched my heart as deeply as Mama Rosalia. She is not only an outcast from Tanzanian society but also an outcast from her leper village in Katoke. Why? Because someone spread false rumors about her being a witch doctor, and the other lepers began to fear and shun her. In truth, she is just a lonely, vulnerable, homeless widow sleeping under the stars, sadly abandoned even by her own children. Her fingers and toes are severely deformed and she walks in pain because of open wounds on her feet.

One of our Franciscan Sisters of Penance and Christian Charity, Sr. Liesbeth Runes from Indonesia, befriended her some years ago, and their relationship has developed into what could only be described as sacred sisterhood. Liesbeth even began to dream the impossible dream of building Mama Rosalia a little house of her own. This year, that dream actually came true when Liesbeth celebrated her 40th jubilee and could share her monetary gifts with Mama. Last month in the midday African heat, Liesbeth was able as aspirant director to not only teach our aspirants Franciscan spirituality but also how to incarnate it in service to others by building a small house for Mama Rosalia.

The aspirant convent borders the leper village, so every day between prayers and study, Liesbeth led 16 of our aspirants to fetch water, carry the heavy buckets on their heads, and walk to where the house was to be built. They then dug a hole and kneaded the water with their bare feet into the dirt to make "cement." With their bare hands they took the "cement" and threw it into the holes between the small homemade bricks that made the walls of the house. When the house was almost completed (within a week's time), the sun was setting and it was too late for the two men who were helping to assemble the roof or to make the door. Nevertheless, door or no door, Mama Rosalia insisted on sleeping inside on the bare earth to guard her little home from dangerous robbers in the area. We watched her carry all her possessions in a small sack and reverently place them in her new space. We noticed a small pot of beans cooking on an open fire and asked what she had eaten so far that day. Her simple reply: "Nothing. I eat one meal a day of beans."

The next day, Liesbeth led us in a prayerful blessing of the house with holy water, asking God to protect Mama Rosalia from all harm. At the end of the blessing, Mama, with a smile that radiated like sunshine, struggled with her deformed and painful feet to do a little dance of gratitude. It was a moment of thanksgiving I will remember all the days of my life. I asked myself: If I had leprosy and lost mobility of my fingers and toes, lost my husband and children, looked forward to only one meal a day of beans, relieved myself in the bushes, carried water on my head from a distance for cooking and bathing, was treated as an outcast from society, was shunned by my leper community, and lost my reputation because of false rumors, would I still be able to smile and do a dance to a silent tune of gratitude?

[Franciscan Sr. Maureen Sinnott is a clinical psychologist and spiritual director in the San Francisco Bay Area. She gives psychology seminars every summer in Tanzania.]

Spirituality | A leper's dance of gratitude

The Francis Effect podcast: Advent, US bishops' meeting and martyrs of El Salvador

Along the Way, journey of father and son, a spiritual tale