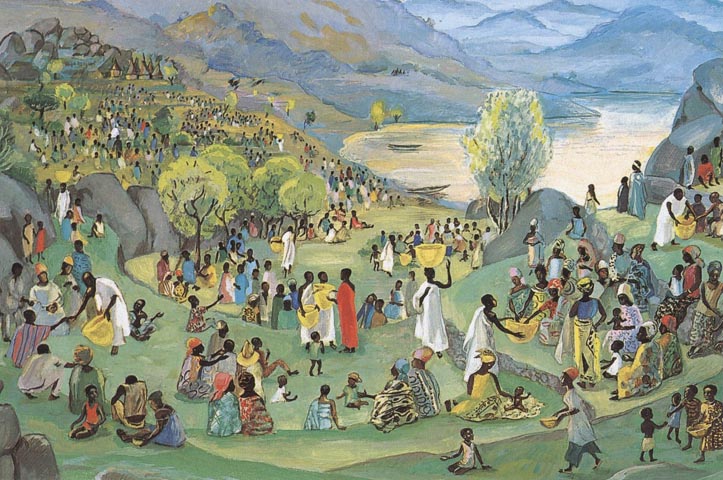 "Jesus multiplies the loaves and fishes" by artist Bénédite de la Roncière, based on a depiction of the Gospel scene created by a Christian community in Cameroon (Vie de Jésus MAFA, www.jesusmafa.com)

As Richard Rohr often reminds us, we see things not as they are, but as we are. Lately, I've been trying to see things through the banquet lens. Surely, that was one of Jesus' best images for his reign: a table overflowing with favorite foods, wines gleaming like rubies in glass goblets.

Since special meals are so unique, pause now to imagine your favorite. Maybe it's Abuela's tamales, a warm cherry pie, a buffet on the deck of a cruise ship, cheese fondue at the top of a ski slope, auntie's eggrolls, the French amuse-bouche, champagne brunch at a posh hotel, Spanish tapas ... Since this is all in the imagination, calories or cost don't count.

Now transfer that image to the blessings of an ordinary day: maybe nothing more unusual than a warm, dry home or clean, running water, both as nourishing as fresh bread. Maybe there were fresh peaches that day, a sense of accomplishment for finally answering pesky emails or cleaning out that swelling closet, a compliment, a favorite song on the radio, a movie, joke, poem, or conversation that lifted spirits. We could make a meal from the rainbow prisms of snow, the sweet fragrance of sheets dried in sun, or an energizing walk in fresh air. Sometimes just finding the car keys is a hot fudge sundae!

God cooks the feast, but we attend, appreciate and savor it. How sad it is to prepare a fine meal that no one eats. Does God ever feel that we've overlooked all God's creative efforts? Do we miss Cana miracles in our midst because we're on the starvation diet?

Jesus would have known the banquet image from Isaiah 25:6: "On this mountain the Lord of hosts will provide for all peoples a feast of rich food and choice wines, juicy, rich food and pure, choice wines." He spoke to a people hollowed by hunger, not burdened with weight as we sometimes are. Yet it's often just as hard for us to do what the ancient Israelites were called to do. As Walter Brueggemann explains, they were asked to leave behind in Egypt "the myth of scarcity," and in the freedom of the Promised Land, embrace "the lyric of abundance."

This isn't a Pollyanna view at which to fling overly ripe tomatoes. But do we focus on the losses or the blessings? Sure, people are sick, homilies can be boring, and the bank balance looks thin. The banquet lens encourages us to look beyond sad realities to a God as intent now on feeding God's people as Jesus was in his lifetime. When he gave bread and fish to 5,000, there was enough; indeed, there were leftovers. If we could stop hoarding and distribute wealth more equitably, we could end the planet's tragic hungers.

Dorothy Day specialized in bread lines. Yet, surrounded by the ugliness and squalor of New York tenements, she insisted on the "duty of delight," offsetting a temptation to sadness. Every Saturday, she listened to the Metropolitan Opera radio broadcast that nurtured her soul.

As an entry into gratitude, we could write our own version of the Hebrew Dayenu prayer:

If we had only been given Jesus as savior, it would have been enough.

If we had received only an education, it would have been enough.

If we had only one friend, it would have been enough.

If we had only our health, it would have been enough.

If we had only one star or one sunset, it would have been enough.

If we saw only one color or heard only one song, it would have been enough.

I think of the banquet at our parish Eucharist, where we sometimes sing John Becker's Litany of the Saints, with its refrain: "All you holy men and women, pray for us." When the choir voices roll like caramel over us, it's possible to see a few saints gleaming quietly in our midst. That heroic mom of five boys, for instance. Or the couple who's made a tender marriage despite financial setbacks. The widow who volunteers in the nursery, the teenager collecting clothing for the poor. And countless others whose stories I don't know.

Sure, a few may be scoundrels and a few are having bad hair days. But the genius of Jesus never suggested that tidy, precise spreadsheets symbolized the kingdom. Instead, he asked to be remembered through a meal. He promised overflowing pitchers, brimming baskets and full bowls, steaming trays of meat and chilled plates of fruit. He seemed much more interested in feeding people than in insisting they keep the rules.

We all come hungry to Eucharist. We all brighten at the invitation to a feast. If we know how to look for hidden nurture in our lives, we'll be well-fed indeed.

[Kathy Coffey is the author of many books like Women of Mercy, Hidden Women of the Gospels and God in the Moment: Making Every Day a Prayer.]

A version of this story appeared in the Nov 21-Dec 4, 2014 print issue under the headline: Seeing all of life through the banquet lens.