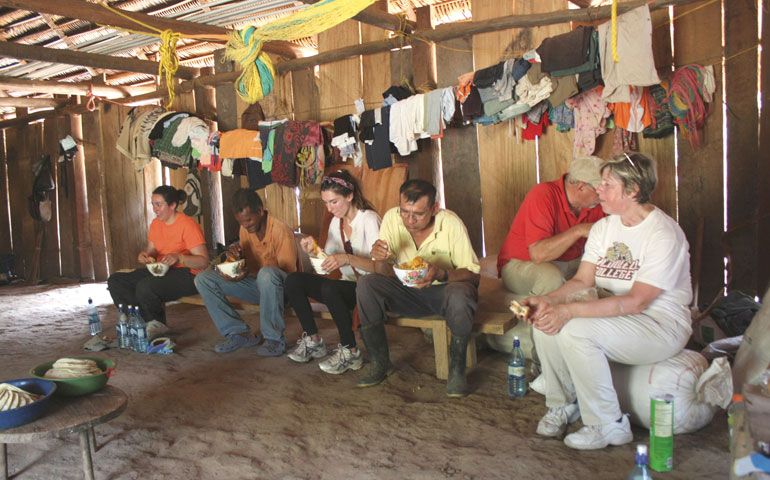 Nancy Blattner (far right), her husband, Tim (behind her), and the Caldwell College group share lunch with their friends from Belize. The village women spent all morning preparing the meal.

Henry David Thoreau asked, "Could a greater miracle take place than for us to look through each other's eyes for an instant?" That priceless perspective, a view of "the other's world," happened to me last spring when I led a group of Caldwell College students to Belize on a service project.

Our mission was to assist three local carpenters in the building of a church in the village of Corazon Creek, a site 32 miles from our lodgings in Punta Gorda, a town of 6,000 in an area nicknamed "the Forgotten District" of Belize. The first morning, we saw that the concrete foundation of the church had been poured and some of the pillars set. Our task was to pour the remaining pillars, frame the structure and construct the roof -- 11 handmade triangular support beams -- before fastening the zinc sheeting to the trusses. Pentecost would be celebrated in this church at the end of the week, and we didn't want to disappoint the eight Catholic families of the village or those who would come from much farther away, by walking or by bus.

We were successful, finishing by midafternoon on Friday. What I will always cherish is what profoundly touched each of us on this trip -- not the building but the relationships we built with the villagers and the glimpses they allowed us into their souls.

On our first workday, we were invited to have lunch with Christina and Roberto, who lived adjacent to the building site. Their family hut had an earthen floor and a fire pit at one end, over which the village women were boiling rice and chicken and making tortillas. No discernible furniture was in sight. Villagers squatted on the floor to eat while the Caldwell group found sacks of rice and dried ears of corn on which to sit. The meal consisted of stacks of tortillas and a meager portion of rice with a small quantity of chicken that contained either bones, fat or both.

This meal was an accomplishment in a house where there was no electricity or running water. The occupants slept in hammocks that they strung up on the rafters during the day. All of the clothing for the family members hung on pegs on one side of the building. The house was covered with a roof made from thatched palm fronds. Despite living amid what we would call abject poverty, the villagers graciously provided us shelter from the oppressive heat and shared their food with us. Throughout the week, they continued to share their lives.

The college students loved entertaining the village children whenever they weren't busy on the construction site. Elizabeth, who repeatedly fell to the ground when "shot" by Marcus' invisible gun, said she'd do anything to hear the children's laughter. As soon as she got up from one such attack, the boys would yell, "Again, again!" and when she obliged, their laughter filled our hearts. Lindsay spent hours coloring and drawing with Margie and her little sister, using books and crayons we'd bought at the local gas station after our first day in the village. Adela and Selenia spent time holding babies Giovanni and Dylen, and took up a collection from the group to purchase a soccer ball for the community, as well as toy cars, dolls and whistles to give to each of the families in the village who had children. When we finished our work for the week, Margie asked us, "When are you coming back?" while Stephen pleaded with us to return soon.

Christina asked me during a break whether my husband and I had come from far away to help them build the village church. I answered simply, "Yes." She asked me where we lived. I debated before replying because I was uncertain whether she would have heard of New Jersey, so instead I said, "Near New York City." She replied, "Is that in Punta Gorda?" I realized that she had never heard of the United States, and I wondered what we might share in common, since I had been fortunate enough to travel internationally, to receive a good education, to live with the conveniences found in a First World country. Yet through our conversations, I realized we share many similarities: We both value gratitude and family. We are both married and the mother of three children. We are both faithful Catholics and we both had responded to God's call in our lives -- in her case by opening her home to a group of visitors and in mine by taking a group of students on a service trip.

During the week we were in Belize, we helped the villagers of Corazon Creek build a Catholic church. They provided us with a broader perspective of life and helped the Caldwell College team more deeply learn the meaning of sacrifice and blessing. I find myself praying daily for the villagers of Corazon Creek, as well as my students who traveled to Belize. I look forward to the coming academic year when we will return to Punta Gorda. There are more lessons to be learned, more relationships to build, more connections to be found -- and a promise to be kept to the children who asked us to come back.

[Nancy Blattner is president of Caldwell College in Caldwell, N.J.]

Every month, I put a poet in my pocket

Angels in the radiation lab

Seeing all of life through the banquet lens

Do what you can, where you are, with what you have