A first sergeant at a military base on the outskirts of Tokyo was trying to motivate his soldiers to think clearly, plan purposefully and execute their orders with competence. As a visual aid, he hung up a sign in the day room that said: PLAN AHE. Of course, it was supposed to read PLAN AHEAD; for years that sign hung on the wall, serving as an example of one who hadn't.

In today's Gospel, the Lucan Jesus offers a similar lesson to those who would be his disciples. In the figures of a tower builder and a warring king who plan ahead, disciples learn that they are not to be naive regarding their commitment to Christ. Each of us must take time to assess our commitment, to calculate the cost, and then be willing to given ourselves over single-heartedly to Jesus anyway. 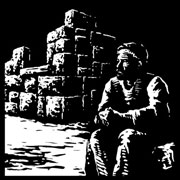 William J. Bausch suggests that each of us must ask ourselves, "What is the cost of being a Christian? Has our faithfulness to the Gospel ever cost us money, reputation, the possibility of advancement, property, or even family harmony? (Once Upon a Gospel, Twenty-Third Publications, 2008). Most of us can think of someone whose belonging to Jesus cost them dearly. Oscar Romero and Dietrich Bonhoeffer spring to mind. Romero preached valiantly against the injustice in his country of El Salvador and throughout the world. He often criticized the wealthy and the powerful for having a "pocket God," a God they carried with them as a sort of talisman who approved of their greed, self-righteousness and persecution of the have-nots. Romero preached a God who was in the hearts of all and who "was closely present to those suffering, totally involved in their liberations" (The Church Is in All of You, Winston Press, 1980). Romero's faith cost him his life. Murdered while celebrating the Eucharist on March 24, 1980, Romero's example calls forth our daring, our courage and our perseverance.

Bonhoeffer was also martyred for speaking truth to power. Hung by the Nazis on April 9, 1945, Bonhoeffer did not relinquish his belief that grace and authentic discipleship come at a precious cost. "Costly grace is the gospel which must be sought again and again, the gift which must be asked for, the door at which a man must knock. ... Costly grace confronts us as a gracious call to follow Jesus. ... This grace is not self-bestowed. ... this grace enables believers to live as disciples in this world without being of it ... grace means discipleship" (The Cost of Discipleship, SCM Press, 1948).

So many lesser-known believers have also lived by costly grace and have suffered for it. Many of these are named in Jesus Freaks: Stories of Those Who Stood for Jesus (dc Talk and The Voices of the Martyrs, Albury Pub., 1990). Pastor Orson Vila was arrested and imprisoned in Cuba in 1995 because he refused to close his church as ordered by the government. In 1993, journalists reported that they saw a group of children in Sudan whose relatives had already been killed for being Christian. Despite the danger to themselves, the children refused to give up their faith. "We will remain Christians," they said, "because this is the truth." In Indonesia in 1997, Pastor Fritz Manampiring and his wife were tortured until they were unconscious because they refused to stop preaching the Gospel.

How can we explain such courage and commitment? In today's first reading, the author of Wisdom reminds us that when we are not able to grasp the things on earth -- like the utter inhumanity of some and the astonishing grace and goodness of others -- God sends the Holy Spirit to guide us how to judge the former and to emulate the latter.

As one who knew well the power of the Spirit and the cost of following Jesus faithfully, Paul allows us to read over his shoulder today as he writes to Philemon. Before he committed himself to Christ, Philemon probably would not have been too concerned over the welfare of Onesimus. Slaves were considered nothing more than a living tool whose life or death depended upon the discretion of their master. But because he had chosen to belong to Christ, Philemon could no longer claim such power. Rather than punishing Onesimus, as was his legal right, Philemon was called to receive him as a beloved brother in Christ. Belonging to Jesus is costly, but the cost was much greater for him who died for us. Plan ahead, count the cost, remain committed in good times and in bad.

Spirituality | Plan ahead; count the cost

Journeying into the ‘Great Work’

Her death still hurts, but it is better now