What we inherit and where we begin 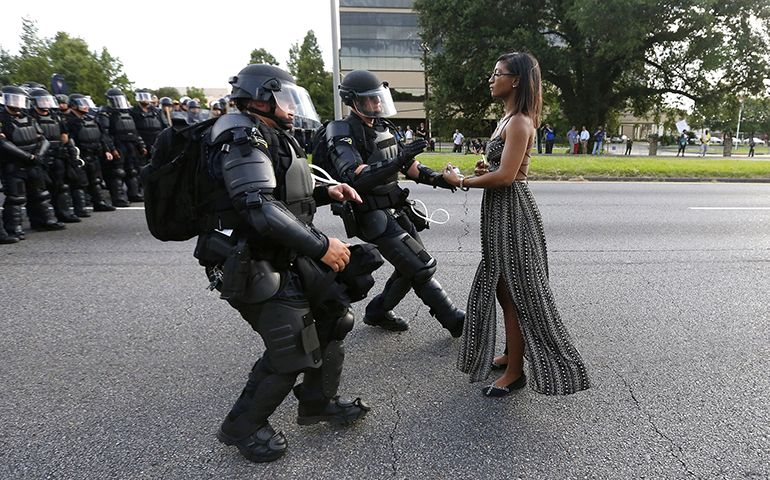 A protester is detained by Louisiana law enforcement near the headquarters of the Baton Rouge Police Department in Baton Rouge July 9. (CNS photo/Jonathan Bachman, Reuters)

Like many Americans, I spent last Friday evening talking with friends, praying, and reading articles in search of some semblance of wisdom after a horrific week. The deaths of Alton Sterling, Philando Castile, and five Dallas police officers -- Michael Smith, Lorne Ahrens, Michael Krol, Patrick Zamarripa, and Brent Thompson -- provided one of the worst three-day stretches in our collective national memory.

To say I felt helpless is probably offensive. Because I am neither African-American nor a police officer, these tragedies are obviously not personal for me like they are for the individuals and families directly involved, not to mention the millions of Americans who are black and/or work in law enforcement. My sense of despair could only scratch the surface of what some surely felt.

I am concerned that anything I offer from my limited, privileged perspective will be ineffective or, worse, detrimental. As Matt Spotts, S.J., asked in America magazine, "[D]o I quiet my own voice in order to amplify the voices of my friends, my colleagues, my students? Or do I speak up, to let them know that no matter how little my voice matters, I'm with them? But more importantly, how do I avoid making this tension all about me?"

These are good, valid questions that only become cop-outs if, in the end, we answer with shrugged shoulders and move on. The inherent limitations of any of our perspectives are not an excuse to avoid expanding our outlook and seeking ways to engage with these issues and the people most impacted by them. Those of us who are white can and must do more to prayerfully and carefully educate ourselves. This, by the way, does not mean seeking out information that reinforces what we already think.

But before we educate ourselves, we should also take a moment to examine ourselves. As I examine myself, I must contend with my own prejudice. It is mostly subconscious, typically so subtle that I do not even notice it. Nevertheless, it is there.

When I was in college, I wrote an article about catching myself instinctively moving a hand to guard my pocket when I passed an African-American man in downtown Milwaukee. I do not know if he noticed, but it was still an embarrassing and uncomfortable experience. I had never been robbed before. Where did my fear come from? Was I a racist?

The goal of my op-ed was to suggest that in the fight to confront racism, we sometimes address laws and structures but overlook subconscious attitudes.

I also wanted to show how common these attitudes are. In the article, I also shared a story Archbishop Desmond Tutu told in his book, No Future Without Forgiveness. The Nobel laureate and South African anti-apartheid leader recounted boarding a plane and feeling pride when he saw the pilot was a black, African man. Given the political atmosphere in which he grew up, the pilot’s career was a laudable achievement.

During the flight, the airplane experienced turbulence, and as the plane swayed, Archbishop Tutu, himself a black man, was shocked to find himself wishing the pilot were white.

When I mention terms like "racial bias," I am not simply talking about Jim Crow and Klansmen, or a standpoint unique to white people. I am referring to the learned belief that led young African-American children to indicate white dolls as preferable to black ones in the 1940s and '50s. It is the acquired impulse that led to my response, as well as Archbishop Tutu’s. To say one has a racial bias is not necessarily to say someone actively looks down upon or disparages other races. Rather, it is to acknowledge that we have all inherited the remnants of white supremacist views and, to varying degrees, continue to carry stereotypes and little-examined beliefs, reflected in casual jokes, kneejerk reactions, and yes, even traffic stops.

There is no doubt that contending with systemic racism is crucial, but our systems are a collective reflection of who we are as individuals. And as individuals, we are the successors of a history that explicitly said some people were better than others solely based on the color of their skin. For all the progress we have made in the last 50-60 years, this awful legacy lasted centuries. Laws and Supreme Court decisions cannot govern the depths of the human mind or fully stop such an inheritance in its tracks.

So, yes, let us work to improve the structures of our society and the state of our union, but let us also remember that our society is composed of human beings with human minds and hearts. If we are unsure of where or how to take up the difficult work of fixing what is broken in our country and world, starting with what is broken in ourselves might be a good place to begin.

Justice | What we inherit and where we begin