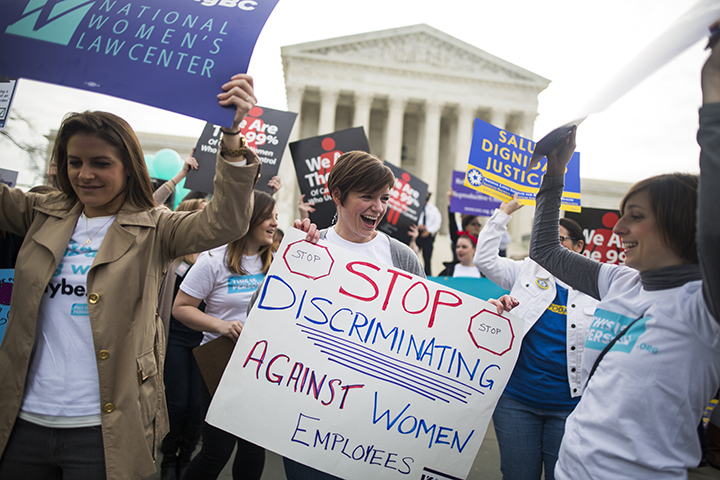 The Supreme Court is evaluating the case of Zubik v. Burwell whose outcome will determine whether women who work for religiously-affiliated institutions will have equal access to contraception, under provision through the Affordable Care Act. Through accommodations, the government believes it has given religious employers ample distance from providing contraception, but religious employers claim the accommodations don't go far enough.

Depending on the ruling, it could affect thousands of women who work for religiously-affiliated institutions such as Catholic hospitals or universities.

On April 12, lawyers submitted additional briefing requested by the Court before its anticipated decision. While this is an important case, it is just one more push in a decades-long campaign by Catholic officials to persuade women from using contraception. Despite the efforts expended, women are not being persuaded.

According to Catholics for Choice, between 2006 and 2010, 99 percent of sexually active Catholic women in the United States used some form of contraception banned by Vatican teaching. It is clear that Catholic officials' campaign to keep women from using contraception has failed. Unfortunately, conservative Catholic groups and their allies are continuing the campaign in courtrooms across the country.

Using the Little Sisters of the Poor as the face of their most recent court campaign, conservatives argue that it would impede the religious liberty of the sisters and other institutions to offer employees seamless access to contraception in their insurance plans. Never mind the religious liberties or consciences of the employees.

Catholics should note that a prominent funder of the organizations involved in the recent court case against women's equal health access is the Knights of Columbus. The organization's leadership has significantly funded key players within the current Supreme Court case over many years.

Also in 2013, the year the initial case was filed, Knights officials made a $325,000 financial contribution to the Becket Fund for Religious Liberty, the law firm arguing the case against women's equal access to contraception. This "charitable contribution" was named in the annual report under "Community Projects."

To be fair, Knights officials made other contributions to community projects that year. For example, they gave $75,000 to the Habitat for Humanity of Greater New Haven and $20,000 to the Connecticut Food Bank. They also contributed $249,000 to the Special Olympics, a cause the Knights have supported since the event's inception.

I applaud the Knights for their generosity to these other projects, but I question why Knights officials chose to give more to a law firm than to the children and adults who benefit from the Special Olympics? Even more, why even label donations to a law firm as charity?

It should also be known that this is not the first time that Knights officials have made donations to the Becket Fund. This law firm regularly receives contributions from the Knights to the tune of hundreds of thousands of dollars. Just a few examples include $415,000 in 2007, $530,000 in 2009, and $326,000 in 2012.

In addition to these contributions, the Knights also submitted an amicus brief that sided against women's equal access to contraception.

During oral arguments at the Supreme Court last month, a number of justices engaged the lawyers to find an accommodation for religious beliefs that would also respect a woman's equal access to contraception. For example, Justice Ruth Bader Ginsberg made it clear that "No one doubts for a moment the sincerity of the belief of your client and all the others. … In none of these cases is that an issue." She went on to share her concern, however, that "as in all things, it can't be all my way. There has to be an accommodation, and that's what the government tried to do."

Justice Elena Kagan also asked if there existed a path that would safeguard not only the religious beliefs of the employers, but also the rights of their women employees: "…I'm asking whether there's any accommodation that would result in women employees getting contraceptive coverage seamlessly through an employer-based plan. …"

In the end, it seems that the court may be heading toward a compromise that could satisfy both parties.

Whatever the judgment of the court in the coming weeks, however, one thing is clear: the majority of Catholics have already made up their minds that institutions should not create impediments for women's access to contraception. For example, a recent study showed that 68 percent of Catholics believe that a religiously-affiliated university should not be allowed to deny its employees and students insurance coverage for birth control.

While Catholics should rightly look with concern on this latest court campaign against women's equal access to contraception, we should also remember the strides women have made over the decades. We live at a time when the majority of Catholic women in good conscience have learned to say "no" to harmful Vatican policies against family planning. Alternatively, these same women have chosen a life-affirming "yes" to care for themselves and their loved ones with contraception.

The Supreme Court will issue its decision in a few weeks, but the majority of Catholic women have already made theirs.