Why I marched (and why we can't stop marching) 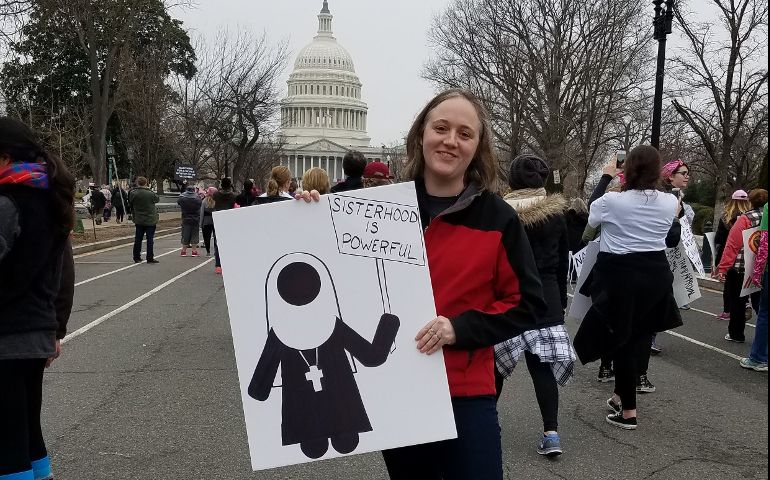 I made my way to the Women's March on Washington Jan. 21 filled with a mix of excitement and trepidation. I had gone back and forth about whether I should go, torn between a deep-seated conviction that there are matters of basic human rights, dignity and justice that need to be defended, and an internal disquietude about a broad protest platform that included certain positions I didn't agree with.

Holding all of this, I went anyway. Why? Because I believe that I needed to be there — to stand for justice, to express dissent and to use my voice and my being for change.

Perhaps the mix of conviction and fear, passion and trepidation, were exactly what I should have felt. This unease reminded me that justice comes at a price, and as I marched with a sign that identified my religious congregation and named our mission of creating union with all people and with God, I again acknowledged that standing up for what you believe in isn't always easy, and it most definitely isn't always clear cut.

Yet if being a religious sister and studying religious life has taught me anything, it's that sisterhood is powerful. The Women's March on Washington (and around the world) only deepened that conviction for me. It also deepened the belief that unity is the path to the future.

When we strive to engage one another in honest, open and often uncomfortable conversations, we emerge the better for having done so. I can't say that I support everything the Women's March was about, but I can say I support enough. I've given my life to a Love that's greater than myself, and that gift calls me to live my life in defense of all of God's creation. I believe in a world where we engage one another's voices and, in so doing, engage in one another's lives.

When we seek unity in this way, relationships guide the way and everyone gets a place at the table. As Shirley Chisholm, the first African American woman elected to Congress and the first woman to vie for the Democratic Party's presidential nomination, once said, "If they don't give you a seat at the table, bring a folding chair."

We come to recognize that, beyond any one person or group, the table is large and the conversation we're engaged in is much larger and much more complicated than what we may have first imagined. Yet together we work with one another to find common ground so that the common good can flourish.

In the days since the March, I've watched as social media has erupted with debates over whether the Women's March was welcoming of all women or just some. The argument is that if you didn't fit a specific stance . . .  if you weren't pro-choice, there wasn't a place for you.

I've watched as fine, upstanding religious women and men have been slandered for supporting the Women's March — called deplorable names and lambasted for asserting that to be "pro-life" is to defend all life — unborn, marginalized, impoverished, incarcerated, trafficked, immigrant and so much more.

That is what it means to be pro-life: to defend the life of every person, even those you don't necessarily agree with. To recognize that every person deserves a voice and to take a stand so that what is right rises to the fore.

Women deserve equal rights. We deserve a world where all people have access to healthcare; where the water we drink is safe; where race isn't a qualifying or disqualifying attribute; where children can be brought up in loving families; where the press is free to report; where facts matter and righteousness and compassion are the principles we live by. 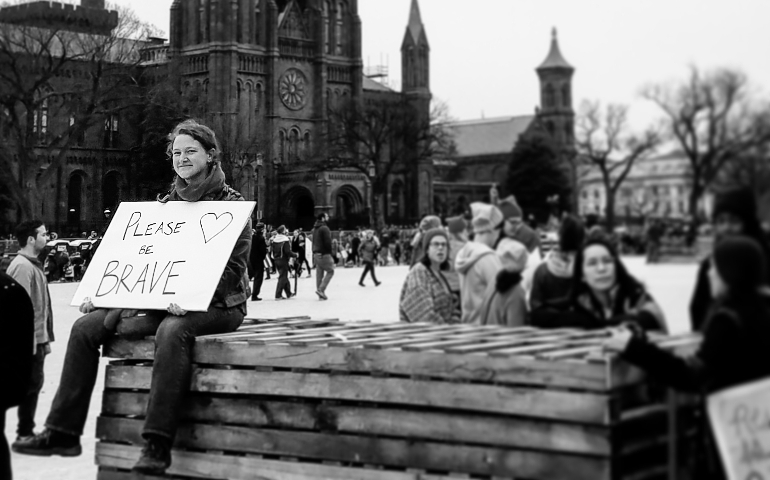 A Women's March participant rests after about five hours of being in the Washington, D.C., crowd. (Colleen Gibson)

I believe in a world where all people are free. I cannot be better than my brother or sister; my good is their good, and that is the Common Good. In an age of "America first," there's a paramount conflict with the belief that the first shall be last and the last shall be first.

I marched on Saturday for the least of my brothers and sisters because I live my life in union with God working for the least of these. I marched for the uninsured woman I accompanied through treatment for breast cancer, which could have been caught by access to preventative care. I marched for the asylum-seeking family my sisters welcomed into their convent so that they would have a home as they tried to find safety and welcome in a new land. I marched for the children in our schools who don't know where their next meal will come from after they go home. I marched to defend the arts which have transformed my life. I marched in honor of all the strong women who've formed me and have given me the gift of faith. I marched for my sisters who couldn't; for the sister who days before the march tucked a 10-dollar bill in my pocket to help pay for my transportation because she knew she physically wouldn't have been able to march that long.

I march in faith, hope, and love — in faith that our voices matter, in hope that democracy lives and in love of my dear neighbor.

Those are ideals for which we can't stop marching. It is the power of our faith and the call of our baptism: to love God and neighbor without distinction.

As Dr. Martin Luther King, Jr. preached less than a year before his death:

. . . the road ahead will not always be smooth. There will still be rocky places of frustration and meandering points of bewilderment. There will be inevitable setbacks here and there. And there will be those moments when the buoyancy of hope will be transformed into the fatigue of despair. Our dreams will sometimes be shattered and our ethereal hopes blasted. . . . But difficult and painful as it is, we must walk on in the days ahead with an audacious faith in the future.

I have faith in the future. I know why I march and I believe that change comes from pounding the pavement. Social change and legislation work together; they help us to define who we are as a society and to set the mores of how we are. I marched in the Women's March on Washington because the future is ours to make. It is a future full of hope. That future can only be founded if we dispel discouragement, discern deeply and actively, and work for justice while keeping our hearts open to one another. We need to stand up for justice and for life. In other words: we've got to keep on marching.

[Colleen Gibson is a Sister of St. Joseph of Philadelphia. Author of the blog Wandering in Wonder, she currently serves as assistant director of campus ministry at Chestnut Hill College in Philadelphia.]

Why I marched (and why we can't stop marching)

Nothing focuses the mind more intensely than death

NCR Podcast: A Nation Under Trump