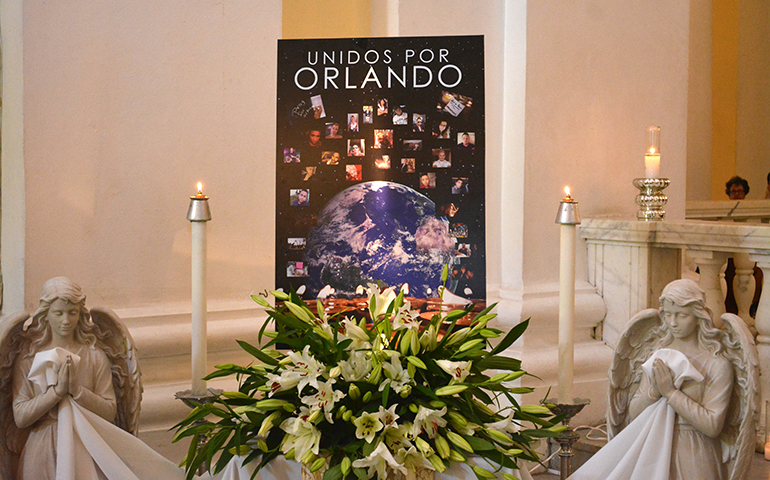 A memorial is displayed June 24 at the San Juan de Bautista Cathedral in Puerto Rico. Archbishop Roberto Gonzalez Nieves of San Juan celebrated a Mass for the victims of the mass shooting in Orlando, Fla. (CNS/Wallice J. de la Vega)

A Mass offered for Puerto Rican victims of the June 12 mass shooting in an Orlando, Fla., nightclub was interrupted when local police entered the San Juan de Bautista Cathedral to investigate the possibility of a bomb inside.

Twice during the Mass June 24, lay church personnel approached Archbishop Roberto Gonzalez Nieves of San Juan at the altar about what seemed to be a problem. The issue turned out to be a backpack left unsupervised on a side aisle, raising suspicion among some in the congregation.

At the start of the consecration, cathedral employees approached the altar once again, this time with three police officers. After the archbishop talked to them, he returned to the altar and finished the consecration.

"Communion will be given outside," Archbishop Gonzalez told Massgoers. "We will be exiting through this side door, everyone through this door." Quietly and orderly, the cathedral was vacated and Communion offered outside. The Mass resumed inside after the bag was claimed by its owner, who was not identified.

"I was accused of having the bag," a shaken Luis Marrero told Catholic News Service outside the cathedral during the recess. "Police officers said the bag was mine, as if I was guilty, but it was not."

The 20-year-old member of the San Juan Archdiocesan Youth Council added the police kept insisting he was the owner of the bag, even after his father verified otherwise.

"It was just a misunderstanding, and it can happen any time," said Orlando Marrero, Luis' father. He said the police officers were just doing their job, but that things could have been handled in a more "subdued" way to avoid "possibly harmful collective hysteria."

Others complained a Mass should never be interrupted, and the bag could have been taken outside for disposal.

Others commented they thought there was a bomb in opposition to a Mass being offered for the souls of homosexuals. The gun massacre took place at a gay nightclub, leaving 49 patrons dead and more than 50 others injured. Twenty-three of those killed were Puerto Rican.

The Mass was said in observance of the feast of St. John the Baptist, patron saint of Puerto Rico's capital city and, until 1969, patron saint of the whole island. The Mass was offered for "victims of the Orlando massacre -- dead, wounded, family members, loved ones, friends, as well a medical personnel, first-aid technicians and volunteers," according to the archdiocesan invitation.

The cathedral, which seats 300-plus, was not completely full. Nineteen priests concelebrated.

"St. John the Baptist was the forerunner of the prophecy, the man who Jesus himself recognized as 'the greatest man ever born to a woman,'" said Gonzalez during his opening message. "He was the man who not only recognized Jesus' divinity at the time of the baptism, but also recognized him when he was in Elizabeth's womb."

Turning to the subject of the Orlando shootings, the archbishop spoke of the unity among Puerto Ricans on the island and those "in the diaspora, those millions of our compatriots, not that they have left Puerto Rico, but who have taken Puerto Rico with them in their culture, in music, in their way of life."

"However, since last June 12, Orlando has a new meaning," continued Gonzalez. "It reminds us of the pain, the violence, the hate, the killing of innocent people. As Pope Francis has said: 'This is the manifestation of homicidal madness and insensible hatred.'"

He also quoted from "On the Pastoral Care of Homosexual Persons," a 1986 letter to the world's bishops from the Congregation of the Doctrine of the Faith. "It is deplorable that homosexual persons have been and are the object of violent malice in speech or in action," the archbishop read. "Such treatment deserves condemnation from the church's pastors wherever it occurs. ... The intrinsic dignity of each person must always be respected in word, in action and in law."

Gonzalez seamlessly tied the observance of the Orlando shootings to the feast of San Juan's patron saint.

"St. John the Baptist was also a victim of hate and caprice," he said, "and he also pointed at Christ considering him a martyr, 'the lamb of God who takes away the sin of the world.'"

Gonzalez continued: "John described himself as 'the voice of one crying out in the desert.' To which kind of words will you listen -- words of hate, violence, vengeance and injustice, or words of conversion?"

After the bomb scare was over, most people went back inside the cathedral to finish the Mass.

Carmelo Santiago, from Utuado, told CNS that he was very satisfied with the Mass, despite the commotion. "When the archbishop calls, we come because that is important," he said, adding that the fact that the Mass was for "people of a different sexual persuasion" was not important to him. "He said we would be doing this for the dead, and that was enough for me."

Sigfredo Pons, from San Juan, said he felt a more personal reason to come to Mass: "We all have people over there, and although many were not there (at the Orlando nightclub), one feels sorry for what happened. We offer the victims and their families our appreciation, our esteem and our faith."

"We should be only the light of the word ... the eternal word that is Jesus," Gonzalez said at the end of his message. "Someone we know has said: 'Who am I to judge?'"