GOD’S RIGHT HAND: HOW JERRY FALWELL MADE GOD A REPUBLICAN AND BAPTIZED THE AMERICAN RIGHT
By Michael Sean Winters
Published by HarperCollins, $28.99

Jerry Falwell: fundamentalist, evangelical, Christian, homophobic, extremist, paradoxical. He was a preacher who transcended lines. Vocal about the moral decline in the United States due to liberal social agendas, by the end of his life Falwell could count Sen. Ted Kennedy and pornographer Larry Flynt as personal friends. 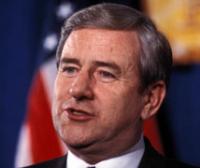 Falwell grew up wealthy in Lynchburg, Va., the wealth due in part to his father’s extralegal Prohibition-era activities. The boy excelled in school, especially in math and science, and graduated from Baptist Bible College in May 1956. Though not raised a Christian, Falwell witnessed tragedies of biblical proportions during his childhood. Falwell’s father, Carey Falwell, shot and killed his own brother. An earlier Falwell biographer called it a duel; Winters portrays the incident as Carey Falwell defending himself from his alcoholic brother’s attack.

In his sermons, preacher Falwell used this personal tragedy to warn against the perils of alcohol and drug abuse.

Falwell became a Christian as many evangelical Christians do today, through a conversion process that can be traced to a single event. It was the decision to attend a Sunday service at the Park Avenue Baptist Church in Lynchburg, where he had heard pretty girls might be found. That night Falwell was introduced both to his Christian faith and his future wife, Macel. His devotion to both his church and family was a constant throughout his life.

By the mid-1960s Falwell was head of a growing family and head of a growing congregation, the Thomas Road Baptist Church. Falwell opened a school, as many church congregations in the South did at the time. The school would grow into Liberty Baptist College (now Liberty University), where then-President George H.W. Bush and Sen. Ted Kennedy delivered speeches.

Falwell is best-known not for his work in the fundamentalist Christian community in southern Virginia, but for his work in national politics. The personal stories Winters tells of Falwell’s formative years, while appealing to the armchair psychologist in all biography readers, recede as the author focuses on how the religious right became the constituency all national Republican politicians must pander to. Winters delves into how anti-Semitism, once an exclusively right-wing conspiracy, today is almost an exclusively left-wing ideology. He explains why compromise in Washington on almost any issue is nigh impossible. Winters then deftly reveals Falwell’s hand in all this. 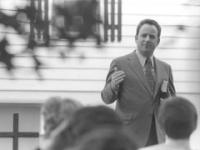 Winters describes this as “baptizing the American right.” What did it entail? First, the creation of a political branch of Falwell’s growing church congregation, “the moral majority,” later, the Moral Majority organization. Through the Moral Majority, Falwell led large voter registration drives in the evangelical community, and helped deliver the 1980 election to Republican Ronald Reagan. More important to Falwell, the Moral Majority brought national attention to issues he claimed were endangering morality in America. The toxic result of this, according to Winters, is that it made all political debates doctrinal and reduced religion to ethics.

Like many public figures, Falwell was a part of a number of scandals: from off-color remarks about Muslims and the Prophet Muhammad following the 9/11 terrorist attacks, to his public fight with Flynt about a cartoon published in Hustler. During one of these scandals Falwell was asked if there was anything in his past that would cause embarrassment. “Yes,” he quipped, “I was raised a Democrat.”

That was Falwell’s genius. Through a clever line or a story from his past, he was able to put a human face on fundamentalist Christianity, a movement unknown to many Americans at the time.

The genius of Winters’ biography is in his objectivity. He does not downplay the harsh language Falwell used to describe homosexuals. Winters does not sidestep the dangers of fundamentalism being applied to national politics. Nor does he take this as an opportunity to bash Falwell or arbitrarily criticize him. Winters puts a human face on the man who put a human face on a movement important to many Americans.

[Ben Feuerherd is a senior at St. Francis College in Brooklyn, N.Y., where he is the copresident of the Phi Alpha Theta History Honors Society.]