THE BROKEN TABLE: THE DETROIT NEWSPAPER STRIKE AND THE STATE OF AMERICAN LABOR
By Chris Rhomberg
Published by the Russell Sage Foundation, $47.50

Today’s American workers are the economically beaten-down stepchildren of Detroit 1995. So contends Chris Rhomberg’s minutely detailed history of a pivotal conflict in which the corporate owners of Detroit’s daily newspapers all but destroyed their employees’ unions.

Rhomberg -- an associate professor of sociology at Fordham University -- grapples with the central public issue of the early 21st century: In the face of overwhelming corporate power, how can we rebuild a secure, prosperous middle class? The general reader will learn much from Rhomberg’s discussion of these broad issues, and may be forgiven for skimming the blow-by-blow detail of a strike that began amid dramatic confrontation in July 1995, and ended 19 months later with the defeated unions’ unconditional surrender.

Detroit 1995 was where and when Gannett and Knight Ridder, two giants of the highly-profitable pre-Internet newspaper industry, spent, by the author’s estimate, $130 million on a “scorched earth” battle against their 2,500 unionized employees. 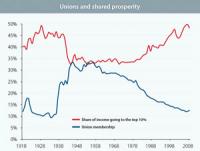 Though workers were divided into 14 bargaining units with as many separate contracts, most worked together during the strike. Blue-collar press operators and delivery workers found common cause with college-trained journalists. Unions were further strengthened by community, church and political allies. At the same time, the unions were probably weakened by their failure to come to grips with technological change or to rapidly bring African-Americans into skilled trades.

Neither the unions’ strengths nor their weaknesses mattered, though, once Gannett and Knight Ridder decided to ride the new wind that had swept America since 1981. That year, Ronald Reagan fired more than 11,000 striking air traffic controllers and banned them from federal service for life. The bosses understood that Reagan-Bush I appointments had packed federal courts with judges tilted toward management.

Organized labor in the 1990s still tended to operate from a post-New Deal consensus model in which labor and management came to the bargaining table “looking to make a deal” to divide the economic pie. However, America’s shrewdest corporate managers had by then decided to “get rid of the table,” as Rhomberg aptly puts it, so they could apportion the pie as they saw fit. (And not only corporate managers. As longtime NCR readers will remember, corporate style union-bashing became fashionable at Catholic hospitals and other social welfare institutions around the time that Reagan crushed the air traffic controllers.)

Today, both sides understand the consensus is dead. Unions represent a mere 7 percent of the private sector work force. If Republicans have their way, this decade will be marked by the destruction of organized labor’s public sector strongholds.

The impact of organized labor’s near-death echoed across society. This becomes self-evident if one charts the decline of organized labor against the growing concentration of wealth in the hands of a few. (See chart.)

So what can be done to achieve economic justice for “the 99 percent,” powerless as we mostly are in today’s economy? Unions alone obviously won’t get us there, in a nation where only a small remnant still has the right to bargain collectively. Changing the law to increase the cost of resisting unions may be, as Rhomberg implies, part of the solution, but only a small part.

Unions remain the most powerful institutions dedicated single-mindedly to economic justice, but they will wither and die if they fight only for their own survival. Self-centered unionism would leave behind millions of minimum wage fast-food workers, sales clerks, home builders, household employees and others with no path out of poverty.

Another, older Detroit story offers our last, best hope for economic justice. A half century ago, the Detroit-based autoworkers union stood up for civil rights. With nothing to gain directly at their own bargaining tables, the United Auto Workers poured money and organizational talent into a movement that was perhaps stronger than the union on passion and creativity, but impoverished financially.

Today’s unions must deploy their still sizable resources to help turn the disorganized, already dissipating zeal of last year’s “Occupiers” into a broad and enduring movement for redistributive justice that challenges the wealthy on behalf of everyone left behind by today’s economy. We can rebuild “the table” only by dramatically enlarging it.

[Steve Askin is research director at Good Jobs LA, a labor-community coalition dedicated to holding wealthy corporations accountable. He is a former Washington bureau chief for NCR and in the early 1980s covered labor conflict in Catholic institutions.]