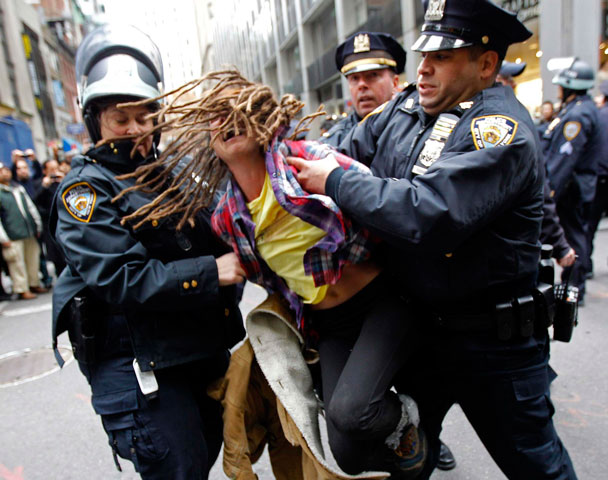 THANK YOU, ANARCHY: NOTES FROM THE OCCUPY APOCALYPSE
By Nathan Schneider
Published by University of California Press, $24.95

Uh-oh. There's that word again: Anarchy. Run. Hide. Call the swat teams. Etymologically, the word has been encrusted with as many definitions as the hordes of citizens who gathered in New York City's Zuccotti Park for two months and beyond in the fall of 2011. The park, a square block in Manhattan's financial district, was peopled by everyone from self-declared enemies of the state and the corporate oligarchy to fervent believers in the power of nonviolent mass protest to create justice-based communities. The grievances ranged from anger at being betrayed by government policies that favor the nation's 1 percent ruling elite to feelings of helplessness against an economic and political system that fails to meet human needs, ignores human rights, and dominates the 99 percent.

Some of those gathered at Zuccotti Park -- as well as at similar demonstrations that sprouted in Washington, Los Angeles, Seattle, Boston and other cities around the world -- would be pepper-sprayed by the police. Others would be dismissed by the corporate water boy media as naive idlers who should be growing organic kale in a Vermont commune, and all of them were mocked by Newt Gingrich as scruffies who need to take a bath and get a job.

Into the scene came Nathan Schneider, a 29-year-old reporter presciently realizing that this gathering of thousands of people was much more than a fleeting uprising of one-note anti-empire dissidents who saw too many Michael Moore movies and heard too many Noam Chomsky lectures. Taking it seriously, Schneider legworked, interviewed, observed, dug and analyzed. No amateur, his dispatches made their way into the pages of The Nation, Harper's, The New York Times, The Catholic Worker and the Internet's "Waging Nonviolence."

Schneider's prose is rich with metaphors, historical allusions and clearheaded reflections that reveal a writer hard at work to get it right. His panoptic reporting in Thank You, Anarchy brings to mind the work of George Orwell in Down and Out in Paris and London, the books of Robert Coles on his experiences as a psychiatrist in the South, and Norman Mailer's The Armies of the Night on the 1967 anti-war march in Washington.

Well aware that, along with pacifism, anarchism is one of the least understood and least appreciated philosophies, Schneider more than once tries to let the sun break through the clouds of misunderstanding. "It was common to think of the people at the center of this movement as being overly radical in one way or another," he writes, "when really the problem was more a matter of the world just not being habitable enough."

"The anarchism they were discovering wasn't simply a negative political philosophy or an excuse for window breaking, as many people tend to assume anarchism is," Schneider continues. "Even while calling for an end to the rule of coercive states backed by military bases, prison industries, and wage servitude, anarchists try to build a culture in which people can take care of themselves and each other through healthy, sustainable communities. Many are resolutely nonviolent. Drawing on modes of organizing both radical and ancient, they insist on using forms of participatory direct democracy that naturally resist corruption by money, status, and privilege. Everyone's basic needs should take precedence over anyone's greed."

The value of Schneider's reporting lies in its breadth. He provides details about the lives and creeds of occupiers, the positives and negatives of their tactics, the difficulties of moving beyond the symbolism of the monthslong demonstration to produce results that lead to a decrease in violence in all its forms -- military violence, economic violence, personal violence, governmental violence -- and an increase in peace in all its forms.

"Movements don't work," Schneider writes, "without human sacrifice, without consecrating our lives to something beyond. They demand that we turn our society into a school to study power, organize, clarify visions, and sustain one another. ... Organizing to build power and resist corruption is something we can all do."

Readers have a choice: they can read Schneider's words and despair that the deck remains stacked and the aces remain in the hands of the moneyed and mighty, or they can be inspired by Schneider's reporting and become doers rather than talkers, organizers rather than agonizers.

A version of this story appeared in the Nov 8-21, 2013 print issue under the headline: Shining an appreciative light on anarchism.