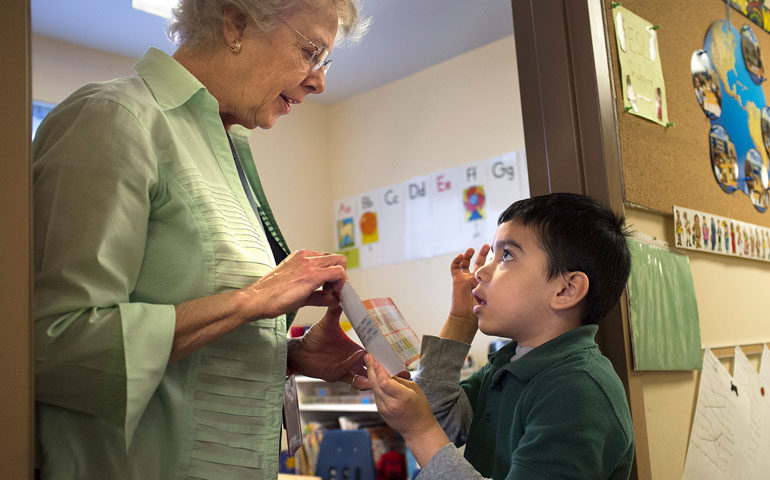 U.S. CATHOLIC INSTITUTIONS AND IMMIGRANT INTEGRATION: WILL THE CHURCH RISE TO THE CHALLENGE?
By Donald Kerwin, with Breana George
Published by Lateran University Press, $16.95

As the (interminable) election season gets underway in the United States, a book on immigration could not be more timely or necessary. Readers should not expect Donald Trump to pick up Donald Kerwin's exploration of the Catholic church's past, present and future role in welcoming the stranger to these shores, but he might learn a thing or two if he did. This thought-provoking title serves as a primer and historical reference, looking to precedent to recommend a future course.

Kerwin, the director of the Center for Migration Studies, a New York think tank, and his colleague, Breana George, have put together a comprehensive review of the church's immigrant roots and its role in the integration of huge numbers of people through its vast network of elementary and high schools, universities, parishes, hospitals, and charities, among other entities. Any reader inclined to forget that this is a nation built on -- and continually renewed by -- newcomers is in for a stark reminder.

The percentage of the U.S. population that is foreign-born today (12.9 percent in 2010) is approaching the historic highs of the late 19th and early 20th centuries (nearly 15 percent), and many of those immigrants are Catholic. This presents not only an opportunity for the church, Kerwin writes, but an obligation to help integrate these new Americans and to respond to their spiritual and material needs, both because they are fellow Catholics and, more importantly, because they are fellow children of God.

Ever at the forefront of this conversation is what, exactly, it means to integrate into a new society. The book refers to Pope John Paul II's 1999 apostolic exhortation Ecclesia in America, and says the "standard elements of integration -- socioeconomic attainment, political participation, interaction with the host society, and a sense of belonging" are insufficient, unless they are located with "a broader vision of 'integral' development, human dignity, and unity modeled on Trinitarian communion."

The book provides a detailed history of the American Catholic church's attempts (often successful, sometimes not) at this integration, through what Kerwin calls an "exhaustive network of U.S. social and pastoral institutions."

He emphasizes, among other things, the role of women religious, the labor movement, encyclicals such as Rerum Novarum (1891) and Quadragesimo Anno (1931), ethnic fraternal groups and benevolent societies that created cultures of solidarity, and formal institutions such as Catholic Charities USA and CLINIC (Catholic Legal Immigration Network Inc.).

It is interesting for this reviewer to learn that, post-World War II, there was a marked shift in the relationship between the church and the government when it came to refugee resettlement. With religiously affiliated agencies having been "mainstreamed," it became much more of a partnership, the result being that "the stated rationale for the Catholic Church's work with refugees has shifted from the preservation of the faith of co-religionists, to a broader human rights vision."

Kerwin touches on the influence of Protestant evangelical churches, which have gained many converts among Catholic immigrants who find appealing the evangelical emphasis on "individual spirituality and conversion as the way to solve the challenges of immigrant communities" and "a congregation that reaches out and helps its members more."

Even as this is happening, though, the book documents the stories of Catholic parishes (and initiatives) across the nation that have reconstituted themselves and experienced a regeneration thanks to the influx of immigrants and the parishes' proactive and welcoming responses.

Kerwin worries that Catholics today take the church's concern for immigration as too much of an article of faith, "one whose lessons have too often been lost or ignored." He returns to this theme throughout, challenging middle-class Catholics to resist embracing dominant U.S. values, most especially consumerism, something Pope Francis has written and spoken on.

The author expects much from Francis, quoting from his 2013 apostolic exhortation Evangelii Gaudium of his hopes for modern parishes, that they become "capable of transforming everything, so that the Church's customs, ways of doing things, times and schedules, languages and structures can be suitably channeled for the evangelization of today's world rather than for her self-preservation."

The book's one puzzling passage cites the European Union's secular integration principles and guidelines, saying that they are "consistent with Catholic teaching and might inform the Church's advocacy on integration policies." While that may be true, and the EU's principles are to be admired, the reality -- especially in the last year -- has been a humanitarian disaster, one that Kerwin leaves unexamined. Material for another book, perhaps.

In the last chapter, Kerwin lays out a plan for how the church can respond to the immigration challenge, facilitating conversation between newcomers (and their children and grandchildren) and the native-born, those of the dominant culture. He emphasizes that both populations need ministering to, and that "the church seeks to evangelize both native and immigrant cultures, to create the conditions that allow all persons to flourish, to build communion based on shared values, and to promote integral development."

It is, ultimately, a compassionate and all-encompassing view that Kerwin espouses, one that calls upon native-born Catholics to play their part in shaping the future of their church, both by supporting newcomers and by becoming better educated in the demands of their own faith when it comes to immigration. A good first step in doing so would be to read this book.

A version of this story appeared in the Oct 9-22, 2015 print issue under the headline: A challenge to welcome immigrants.