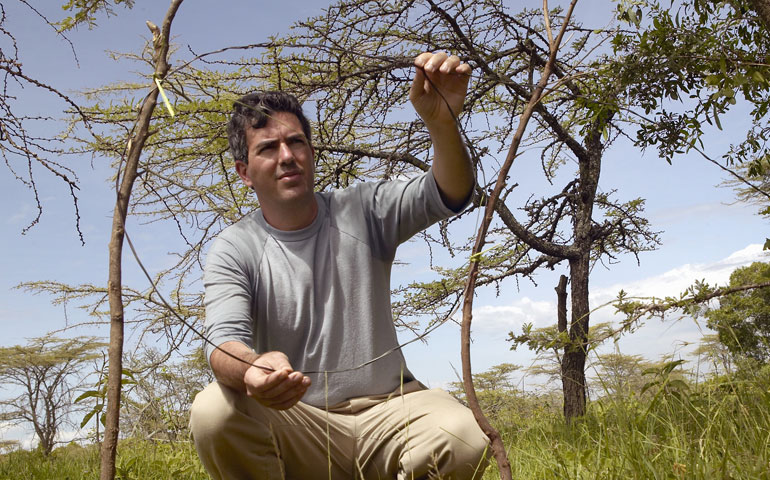 THE HUMANE ECONOMY: HOW INNOVATORS AND ENLIGHTENED CONSUMERS ARE TRANSFORMING THE LIVES OF ANIMALS
By Wayne Pacelle
Published by William Morrow, 368 pages, $26.99

In my gloomed moments of despair, roused by thinking about the hidden and daily suffering of billions of animals in the food and clothing industries, I remember citizens of conscience like Wayne Pacelle. As the longtime president of the Humane Society of the United States, he is all but unmatched in reducing the cruelty in the nation's factory farms and other scenes of gore -- practices like dismembering cows for their hides that become leather, and suffocating en masse male chicks minutes after hatching.

Pacelle's prose in The Humane Economy: How Innovators and Enlightened Consumers Are Transforming the Lives of Animals ranges from the conversational to the analytic. He is both a reporter offering facts and an advocate for decreasing the violence that humans, directly or indirectly, inflict on animals.

He argues, "Today there's more progress, more communication, more commentary and more action on animal issues than ever before -- a veritable revolution in information, thought, and practice." He reminds us that the Humane Society, founded in 1954, "has helped to pass more than one thousand state laws and federal laws, and is working to see these laws enforced."

That's undoubtedly true. Other realities, though, persist. The politics of animal rights was all but ignored in the presidential race. Could it be imagined that Hillary Clinton, Donald Trump, Jill Stein or Gary Johnson would have called on the nation's flesh eaters to become vegans -- whether for ethical, health or environmental reasons?

Can anyone see President Barack Obama even coming close to denouncing the horrors of factory farming and calling on Americans to convert from omnivore to herbivore diets that would improve the nation's health and economy and decrease greenhouse emissions? Michelle Obama urges schools and parents to serve vegetables and fruits to children but always assures us that she and her family are not vegetarians -- as if that would push her into the fringes of abnormality.

Pacelle praises Pope Francis for teaching in his encyclical "Laudato Si', on Care for Our Common Home" that "our indifference or cruelty towards fellow creatures of this world sooner or later affects the treatment we mete out to other human beings. … Every act of cruelty towards any creature is 'contrary to human dignity.' "

Yes, Francis is lucidly right. But while he's at it, why not call on Catholics to stop eating the flesh of animals, to stop ignoring their complicity in the suffering by not buying meat, cow's milk and chicken's eggs?

To bolster his argument that the economy is becoming humane, Pacelle cites the innovations of dozens of entrepreneurs, like Ethan Brown who founded Beyond Meat in 2009 (NCR, Aug. 26-Sept. 8). Such companies' toil is to "develop meat facsimiles that replicate the look and taste of meat." It is a "strategy that doesn't require winning over consumers on moral or ecological reasoning -- which simply may not be persuasive for some folks. Rather, the goal is to appeal to their gut-level instincts on taste and desire by giving them something loaded with protein and familiar in texture."

At the same time, Pacelle is not deluded: "While the growing roster of companies making and offering plant-based proteins is an indicator of changing times and tastes, the sector is still tiny compared with the meat industry, which generates billions in sales."

Agribusiness giants, like Tyson Foods and its $37.6 billion in annual sales, are edgy that advocates like Pacelle are roiling the waters. Playing defense, the companies trip over themselves to pose as marketplace angels that sell only "humanely raised" meat, "cage-free" eggs and "hormone-free beef."

Such guff is a con to move the average American to keep devouring 29 land animals a year and remain what Pacelle calls "deeply disconnected" from "any thought of the handling and killing from our daily experience. … Naturally, the last thing the industry wants is for you and me to think, even momentarily, of all that happened before the meat reached the grocery store. The ideal producer, by their lights, is someone who doesn't let conscience get in the way of what he or she wants. And that's their image of the ideal customer too."

Some bunch, isn't it?

[Colman McCarthy is a former Washington Post columnist. His recent book is Teaching Peace: Students Exchange Letters With Their Teacher. All NCR book reviews can be found at NCRonline.org/books.]

A version of this story appeared in the Dec 2-15, 2016 print issue under the headline: Pacelle's prose bolsters animal rights movement.