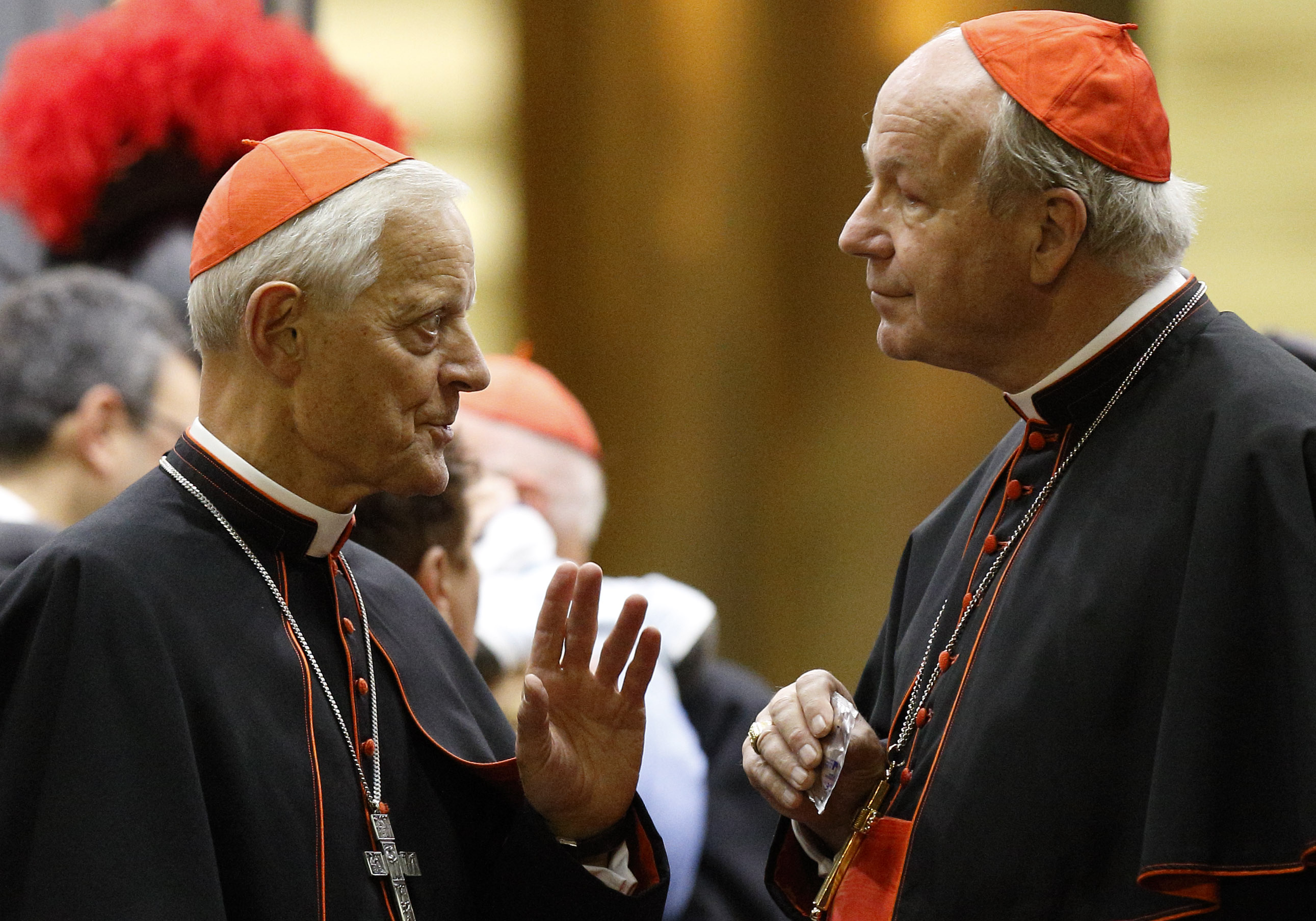 Cardinal Donald W. Wuerl of Washington, left, talks with Cardinal Christoph Schonborn of Vienna as they leave the opening session of the Synod of Bishops on the family at the Vatican Oct. 5, 2015 (CNS/Paul Haring)

On the same day it was announced he will co-launch Pope Francis' new widely anticipated document on Catholic family life next week, Austrian Cardinal Christoph Schönborn spoke at a Rome conference against the hardening of the heart by clergy and political leaders.

Schönborn, a Dominican friar who leads the Vienna archdiocese, said the way that mercy sometimes encounters a hardening of the heart is an "enigma" that was faced by Jesus, even amidst his closest followers.

"We have to be frank that even the disciples of Jesus suffered a hardening of heart and Jesus often had to ask them why their hearts were so hard," said the cardinal, speaking at the gathering of the World Apostolic Congress on Mercy.

"Why do you not understand?" Schönborn imitated Jesus speaking to his followers.

Then, speaking of the church today, the cardinal asked: "Why do we so many times have hard hearts between ourselves, mad at our communities?"

Schönborn was speaking Thursday hours after the Vatican announced that Francis' apostolic exhortation on family life -- titled “Amoris laetitia, On Love in the Family" -- will be released April 8. The cardinal will present the document at a press conference that day alongside Italian Cardinal Lorenzo Baldisseri.

The document is the result of two back-to-back meetings of global Catholic bishops in Rome in 2014 and 2015, known as synods. It expected to address sometimes controversial issues like divorce and remarriage and same-sex marriage.

Schönborn touched upon the conversation around the church's teaching on divorce and remarriage in his address Thursday, saying the church is called to reflect on the relationship between truth and mercy.

"There is no mercy without truth," said the cardinal. "I would say that truth is the landing ground of mercy. If we do not give truth to our situations, God cannot offer us mercy."

Reflecting on a parable in John's Gospel where Jesus meets a woman at a well who is said to have had several husbands, Schönborn said that Jesus "lays bare" the truth of her situation when he tells her bluntly that she has had five husbands.

"The truth makes us free," said the cardinal. "Without the truth you cannot have the mercy of Jesus."

"But the truth in its right form, and there is need to say the truth without wounding," he continued.

He identified two questions: "How do you say the truth without wounding mercy? How do you be merciful without omitting the truth?"

Schönborn, who had flown to Rome after visiting refugee communities in northern Iraq, also spoke against the pan-European response to refugees fleeing the Middle East and to the U.S.-led wars in Iraq and Afghanistan.

Calling the European response to refugees a "hardening of the heart," the cardinal said that instead of welcoming them that Europe is "making new iron curtains."

Mentioning a visit he made with a sickly Muslim man living amid Christian refugees in Erbil, Iraq, Schönborn said the man had told him: "I am touched by the goodness of the closeness of my Christians neighbors who live here, who help me with my sickness, who sustain me."

The cardinal said that because of the experience with the Christian refugees, the Muslim said he now felt that Jesus was "a true prophet."

"I had tears," said Schönborn. "This is a testimony of the effect of lived mercy."

The cardinal concluded his talk with a reflection on Jesus' parable on tenant farmers who rent land from a man but refuse to pay the rent, and even kill the people the man sends to collect the money due.

Jesus says the man himself will eventually visit the farm to kill the tenants in revenge and to rent the farm to others.

"I think ... that Jesus here explains the logic of the world," said Schönborn, tying the parable to global events after the terror attacks of Sept. 11, 2001.

"I was frightened when President [George W.] Bush, as a first reaction, said there would be absolute war against terrorism," said the cardinal. "I expected that he, a Christian, would say: 'We have need of penitence. We must convert ourselves.' "

"What did the world do?" he asked. "The Iraq War, the Afghanistan War, and all that followed this tragedy, [these] useless wars."

"The Christian refugees that I visited [in Iraq] ... are the result of this reaction to 9/11," said Schönborn.

"To our lack of mercy, he responded with more mercy not with less mercy," said Schönborn. "His response to the violence of the winemakers was the gift of his life."