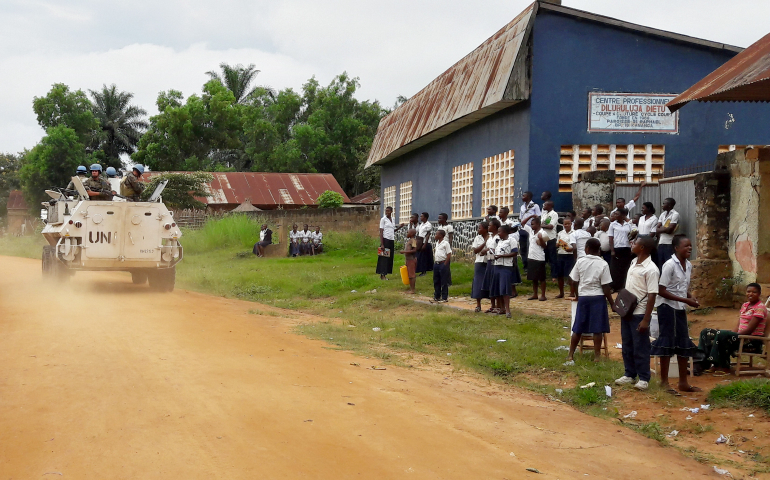 Three weeks after the Catholic Church gave up mediating in the conflict-torn Democratic Republic of Congo, the country's bishops are defending their record and blaming the impasse on politicians. However, attacks on clergy and parish buildings have also raised questions as to whether the church has come too close to politics in what's widely considered Africa's most Catholic country.

"The bishops' conference mission has been interpreted by some as an attempt to distract attention from issues of the hour," said Msgr. Jean-Marie Bomengola, secretary of the church's Social Communications Commission. "But one shouldn't miss the target when analyzing events here. The failure of negotiations should be blamed on the political and social actors who didn't show a spirit of compromise. It's to them that demands for an explanation should be addressed, and on whom pressure should now be exerted."

Catholics in six archdioceses and 41 dioceses make up around two-thirds of the 67.5 million inhabitants of the Democratic Republic of Congo — according to the Vatican's Annuario Pontificio yearbook, published this month — and runs an extensive network of hospitals, clinics and farms, as well as around half of all schools.

The country, formerly known as Zaire, has known little stability since gaining independence from Belgium in 1960, and up to 6 million people died in a series of 1995-2003 wars, fought mainly over Congo's rich natural resources.

An initial settlement in October wasn't accepted by some opposition groups. So the talks resumed before the Dec. 20 expiry of Kabila's second and final term, and the outcome, in the final hours of 2016, was an accord witnessed by foreign diplomats.

This allowed the 45-year-old president to stay in power until elections in late 2017 alongside a government headed by an opposition-nominated prime minister, with a National Transition Council monitoring the electoral process under veteran opposition leader Étienne Tshisekedi.

In a pastoral letter, the bishops said the accord reflected a "consensual and inclusive political compromise that sets out a realistic route," and they warned that the whole Democratic Republic of Congo risked "plunging into uncontrollable disorder" if the accord failed.

However, negotiations to implement it have run into trouble.

On Feb. 1, the transition council's intended president, Tshisekedi, died unexpectedly in Paris, robbing the transition of its key figurehead. Meanwhile, government and opposition negotiators failed to agree on a timetable for the elections, or a share-out of ministries in the new 54-member caretaker government.

Plans for a summer visit by Pope Francis, building on his late 2015 peace pilgrimage to the nearby Central African Republic, were canceled in mid-March. And on March 27, the bishops' conference president, Archbishop Marcel Utembi Tapa of Kisangani, pulled out of the implementation talks, complaining that the politicians involved had failed to prioritize "the welfare of the people."

The Catholic Church could not "mediate endlessly," the archbishop complained: It would now be up to Kabila to oversee the New Year's Eve accord.

"The results obtained in this final round of direct political negotiations are far from satisfying the expectations of the population, whose security and economic plight are becoming ever more alarming," Utembi told a press conference at Kinshasa's Inter-Diocesan Center. "We are therefore bringing the political impasse in these discussions to national and international attention — as well as the incapacity of the political and social actors to find a compromise."

There'd been disagreement over the church's role as well — particularly over whether church representatives should sit on the National Transition Council or merely be present as observers. In some quarters at least, this appears to have fueled an anti-church climate.

Attacks on Catholic clergy and property had been reported in February at Kinshasa-Limete, Lubumbashi and other towns, prompting "particular condemnation" in the bishops' pastoral letter.

"The current insecurity results from various factors, including a deficit in administrative care by the state, impunity which favors neglect, the politicization and instrumentalization of customary power and the porousness of our country's frontiers," the letter contended. "The long wait for a peaceful democratic alternative is expressing itself in impatience and tension even towards our bishops' conference, which is only trying to mediate. Recurrent threats and violence are being fueled by manipulation shamefully directed against the Catholic Church."

In a March 30 joint statement, the bishops' conference and the Vatican nuncio, Archbishop Luis Mariano Montemayor, condemned the killing of civilians by rebel groups, but also urged Kabila's security forces to use "proportional means."

But the attacks continued — with at least one human rights group, the Kivu-based Center for Promoting Peace, Democracy and Human Rights, warning the Vatican's Fides news agency that the attacks appeared to be orchestrated to "punish" the bishops for their mediation efforts.

In early April, Bishop Sébastien Muyengo Mulombe of Uvira told France's Catholic La Croix daily that he'd been forced to suspend pay to teachers at church schools after "highway bandits" killed a wages delivery driver. He added that his diocese was now "in a state of permanent insecurity, of carjacking, pillaging and killing."

The head of Caritas in the Luebo diocese, Fr. Charles Mukubayi, said Catholic school buildings and order houses had been "sacked and torched" during fighting between Congo army units and followers of a traditional chieftain, Kamwena Nsapu. The priest added that the local St. John the Baptist Cathedral had been desecrated, along with a seminary at Kananga, and said Catholic clergy had taken refuge in nearby forests and risked being killed if they emerged.

If successful, the New Year's Eve accord would ensure the first-ever peaceful power transition in the Democratic Republic of Congo, where armed groups have exploited regional instability since Kabila succeeded his assassinated father in 2001.

In an April 10 report, the United Nations' Office for the Coordination of Humanitarian Affairs said that more than 400 people had been killed and 640,000 displaced by the latest violence, mostly in Congo's troubled Kasai province. There, a monastery, hospital and school run by the Salvatorian order were pillaged and burned in early April, along with a convent and a diocesan building.

U.N. officials have urged Congo's armed forces to cooperate with the United Nations' own military mission, MONUSCO, against rebel groups. But on April 7, opposition parties rejected Kabila's latest choice for prime minister, Bruno Tshibala, and on April 10, in another mark of deepening divisions, more than 130 opposition supporters were arrested during a day of protests.

Despite everything, some Catholics remain hopeful.

Msgr. Léonard Santedi Kinkupu, rector of Kinshasa's Catholic University and a former bishops' conference secretary-general, thinks Utembi and his colleagues have been right to "reassert a critical distance from politics." Religious leaders have helped mediate political agreements in the Central African Republic, Benin and South Africa, he points out, so the Democratic Republic of Congo was no exception.

"Being a Catholic country has given us an advantage over other African states when it comes to seeking peace, and it's good the church could use its moral authority to bring about these negotiations," Kinkupu told NCR. "But while seizing the moment, it's also necessary to know when the time has come to step back and leave the final implementation to others."

In extending its good offices, the church inevitably risked being drawn into politics, the priest points out. But he's adamant the church was right to offer its services, and believes it could still resume its mediation if both sides show enough goodwill.

"The church's engagement had the merit of bringing politicians who could barely even talk to each other together in a frank and fraternal face-to-face exchange — and of allowing the Congolese people to believe it's possible to work together in resolving their country's problems," Bomengola said in a commentary. "Partisan interests seem to have prevailed for now over the superior interest of the nation. But the church can still be pleased that it's performed a commendable job suited to its mission."

[Jonathan Luxmoore is a freelance writer covering church news from Oxford, England, and Warsaw, Poland, and serving as a staff commentator for Polish Radio. He is the author of several books, including a two-volume study of communist-era martyrs, The God of the Gulag (Gracewing, 2016).]