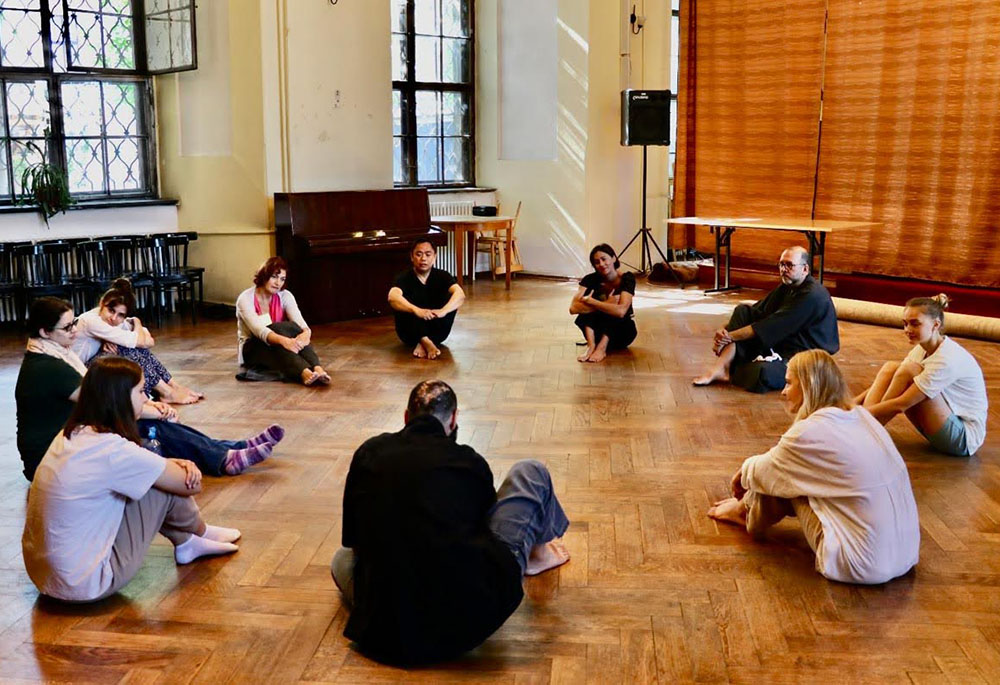 In late August, three Franciscan friars taught a group of Ukrainian actors how to wander around like zombies.

The friars were taking part in a collaborative effort among Capuchin and Conventual friars and Secular Franciscans to use performing arts exercises to help displaced people and refugees.* They traveled to the Polish town of Legnica, where thousands of Ukrainians settled after the Russian invasion. Improvisation exercises and role-playing games — like pretending to be a zombie — are part of the friars' distinctive theater curriculum that teaches cooperation, rebuilds social connections and helps participants deal with other harmful effects of wartime trauma.

The workshop participants were professional actors from the Ukrainian city of Vinnytsia, south of Kiev, who were learning to lead their own social theater workshops for other refugees. Meeting in a school auditorium next to Legnica's Church of St. John the Baptist, the weeklong intensive training prepared them to work with refugees in Poland and others in Ukraine who have left parts of the country where there is still fighting. Many refugees are struggling with the social and psychological wounds of war.

In the zombie game, participants said, the friars picked one actor to moan, groan, and walk around with her arms extended, acting like the undead you might see in any horror film. The zombie's job is to touch another member of the group to turn them into a zombie. But the target can escape if she calls out someone else's name. The zombie then has to turn around and pursue this new person.

Capuchin Fr. Stefano Luca, who founded Capuchin Social Theater 16 years ago and has led workshops in countries across the world, said the zombie game only seems to be about learning people's names.

"At first, you think that the main character is the zombie because he is the one making noise and acting strangely," Luca told NCR. However, the others in the group, not the zombie, are the main characters, he said. The zombie game helped the actors understand that when they lead workshops, the participants and not the trainers should be the center of attention. 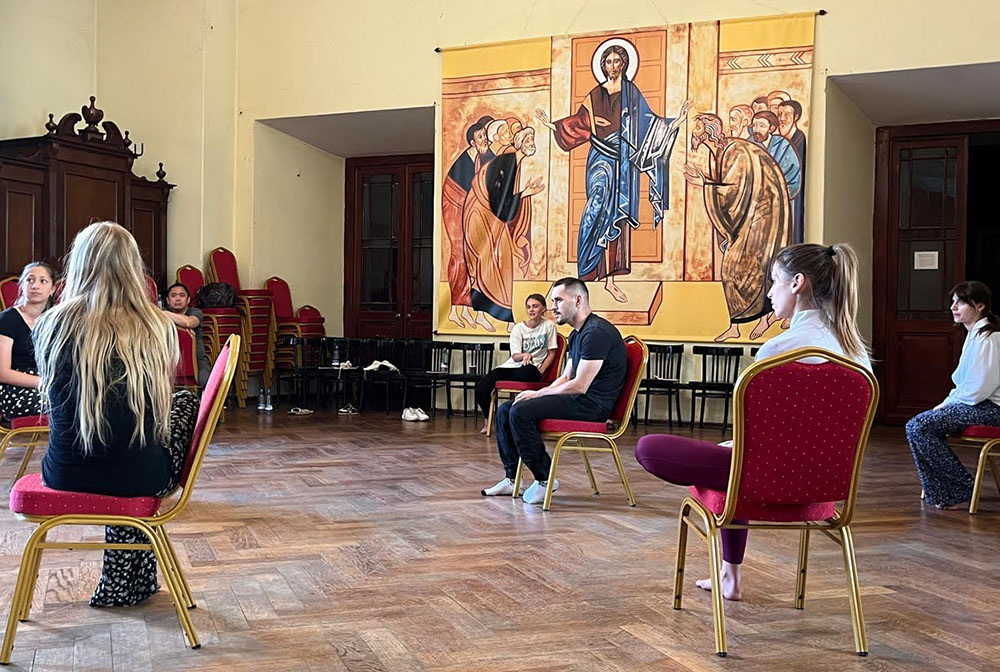 For refugees, as much as soldiers who experience combat, not every war wound is physical.

Luca, originally from Italy, said refugees often struggle with social and psychological difficulties, especially isolation and fear. In wartime, communities of family and friends and social institutions like work and school — an entire social world that had seemed to be stable — suddenly collapse. Even after meeting needs like shelter and food, refugees continue to feel that they can't trust their fellow human beings.

Learning to rely on people in their new circumstances is a challenge, said Marria Lvova, a translator and workshop participant. "They are closed in on themselves and it's very hard for them to communicate."

Social theater is crucial, she continued, "because refugees need psychological help just as much as financial assistance." 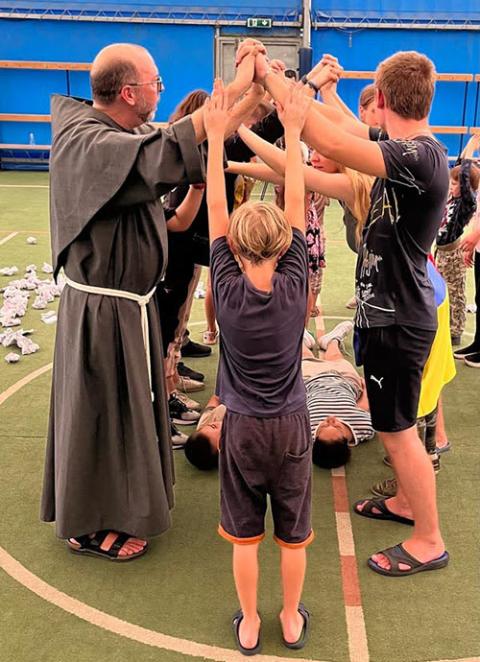 In another exercise, Conventual Franciscan Fr. Michael Lasky, an American, told the actors to split up into pairs. They were given a single exchange of dialogue. One said, "We need to talk." The other, "Not now."

They repeated the lines using different tones and facial expressions, but nothing worked to change their responses.

"People who are dealing with the trauma of war," Lasky explained, "they get stuck."

The participants then formed two groups facing each other, each of which chose an action to accompany an audible sound, Lasky said. One group chose to shout "Hoh" while slapping themselves on the chest. The other group responded with the same sound and action, passing it back and forth in a kind of conversation. But it was a conversation with gesticulations and sounds, not words.

Refugees often associate isolation with the feeling that their voice doesn't matter. Alone, their voice is quiet and small, and no one hears it. But as the groups responded to each other, Lasky recalled, "It was like amplification. We were teaching each other how to cooperate again."

The friars were aware that the Ukrainian actors had gone through some of the same traumas as the people they hoped to help. The exercises brought up deep experiences, which the actors shared before and after each exercise while sitting in a circle on the floor with the friars. 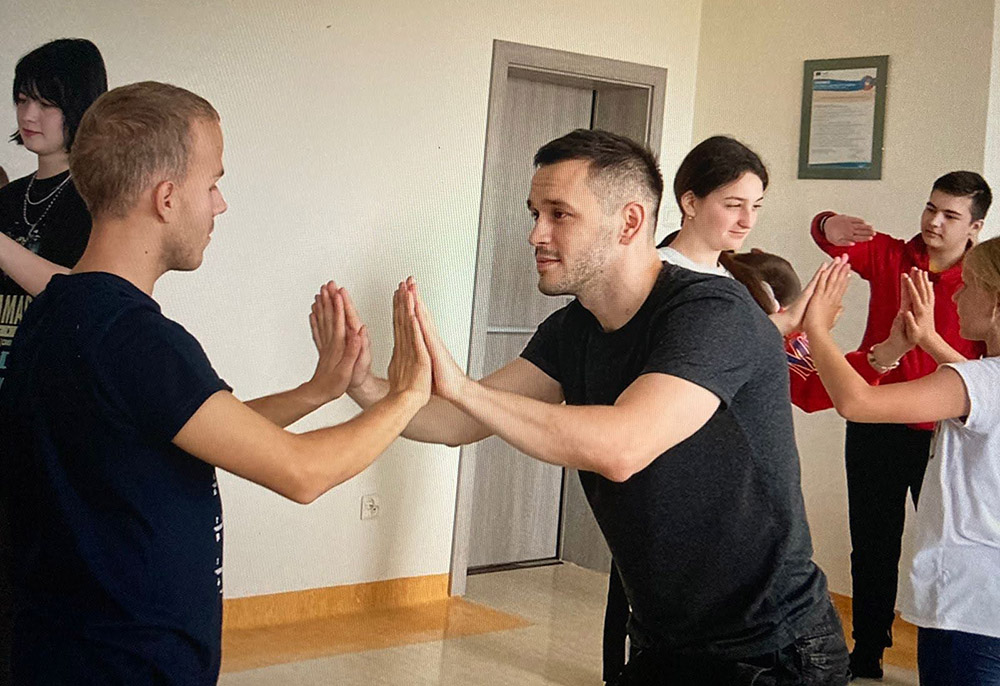 After one discussion, a young actor, Mykola Panaciuk, asked Lasky to celebrate Mass for his brother who had died early in the war.

Celebrating Mass continued the work of the training, Lasky recalled. "We were able to pray together, for him, for his family, and for his brother. We remembered that there will be someone to call out your name."

Panaciuk, along with fellow actors Polina Frulova and Marina Zharkovska, is already using social theater with a group of blind and visually impaired Ukrainians in the Polish city of Bialystock. The actors wanted to help these refugees not only overcome their sense of isolation but also help them feel more empowered in their new environment.

Another workshop will be for sighted participants — Polish and Ukrainian individuals together — to help them understand the distinctive challenges and capacities of refugees with visual impairments.

Panaciuk reports that there are signs that social theater is making a difference already. "One young man, who is blind, said he is going to sign up for a local soccer team, even though he didn't dare before." 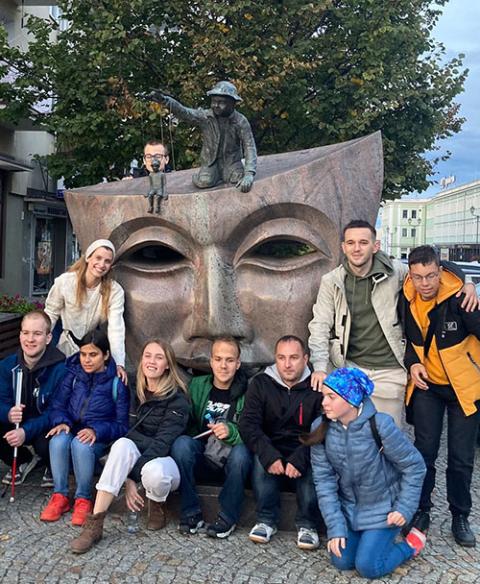 New social theater facilitators Marina Zharkovska, Mykola Panaciuk and Polina Frulova pose with blind and visually impaired refugees from Ukraine at the close of their workshop in Bialystock, Poland (Courtesy of Mykola Panaciuk)

Other workshop participants have returned to Ukraine with plans to use their new skills with displaced people in Vinnytsia. More than 7 million displaced people have remained in Ukraine, according to the United Nations, most fleeing their homes in the country's south and east. Before joining the workshop, elementary school teacher Mariia Levchenko was already working with children from Mariupol, the southern city that Russian forces besieged for months in the spring.

Last week, Levchenko led a special tour of Vinnytsia for refugee children now trying to get to know their new city. Working with local officials, she had already been planning the "City of Dreams" tour before spending a week with the friars in Legnica.

She prepared a city map with important sites marked in blue. "I wanted to show them that wherever they are," Levchenko said in an interview through an interpreter, "they can make this new place special just with their thoughts and dreams."

Now that the "City of Dreams" project is done, Levchenko has plans to use her new social theater skills in her schoolroom.

Lasky and Luca plan on returning to Poland in February. In the meantime, they are meeting regularly with Panaciuk, Frulova, Zharkovska and the other actors on Zoom. The follow-up training will help the actors deepen their expertise by talking about the workshops they have already conducted.

"They'll be able to process what they've experienced in their workshops," Lasky said, "and they will go back to Ukraine even stronger for it."