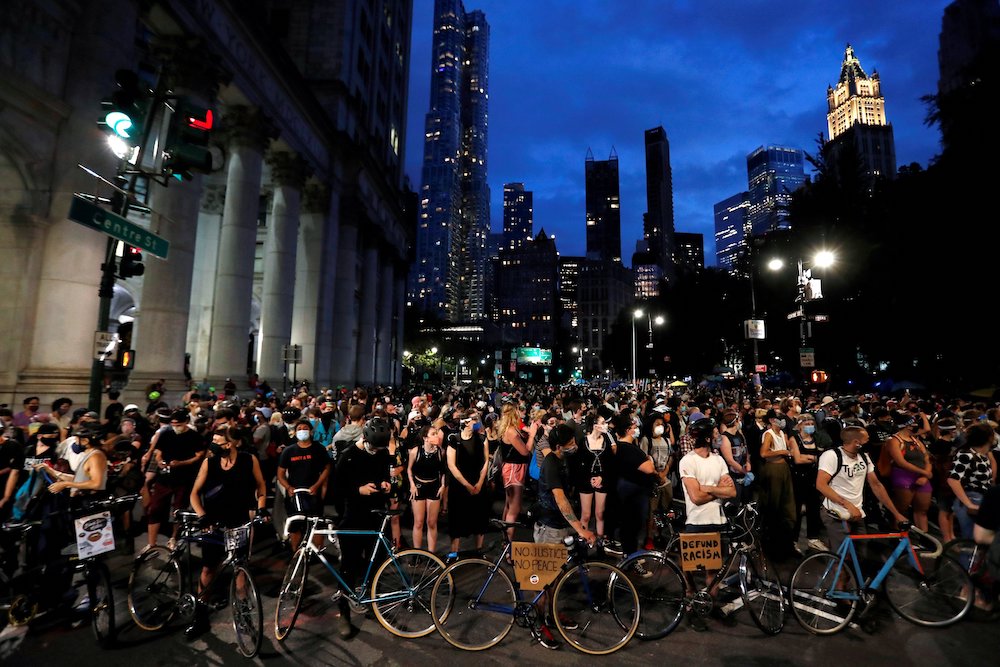 2020 has shown us just how disconnected we have become. We have disconnected from our care of our most vulnerable populations, our respect and admiration for our essential workers, our promise to never repeat our racist history, and our dedication to a true democracy.

NCR's opinion, commentary and editorial writers addressed all these topics (and more), urging our church and our world to respond to these points of disconnection.

These 10 stories are NCR's most read — not necessarily the most important — opinion articles and commentaries and are listed in order by the number of site visitors who read the story. You can read NCR's most read news stories here.

1. The assumptions of white privilege and what we can do about it

In June, days after the murder of George Floyd and in the midst of Black Lives Matter protests dotting cities all over the country, Fr. Bryan N. Massingale wrote this powerful essay.

Massingale talks about white privilege and white people's assumption that above all else, "white people matter, or should matter, more than people of color. Certainly more than black people. That black lives don't matter, or at least not as much as white lives."

"This is where things may get uncomfortable for most of you, who I assume (and hope) will be white," Massingale writes. "At some early age, you realized that no matter how bad things got for you, at least you would never be black. And it dawned on you, though you rarely consciously say it, that you would never want to be black. Because you realized, even without being explicitly told, that being white makes life easier. Even if you have to do some hard work along the way, at least you don't have to carry the burden of blackness as a hindrance."

In June, the Vatican's Congregation for the Doctrine of the Faith ruled that a baptism was invalid if the minister said "We baptize" instead of "I baptize."

One priest in Detroit, Fr. Matthew Hood, watched the video of his 1990 baptism and realized that the deacon used the "we" formula. As a result, Hood was not a Christian, let alone a priest, because he could not be validly ordained a priest if he was not validly baptized, writes Jesuit Fr. Thomas Reese in a column responding to the rule.

This isn't the first time that the formula has been tested, says Reese, as some priests have tried gender-neutral nouns, which were declared not only illicit but invalid in 2008.

"The real problem here is that the Vatican is treating the traditional words of baptism like a computer password," Reese writes. "Without it, you cannot get into the church."

St. John Paul II was a major figure in the Vatican's November report on the rise of disgraced former Cardinal Theodore McCarrick, promoting him throughout the ranks despite warnings from his advisors.

"It is time for a difficult reckoning," we write in our editorial. "This man, proclaimed a Catholic saint by Pope Francis in 2014, willfully put at risk children and young adults in the Archdiocese of Washington, D.C., and across the world. In doing so, he also undermined the global church's witness, shattered its credibility as an institution, and set a deplorable example for bishops in ignoring the accounts of abuse victims."

In the editorial, we urge the U.S. bishops' conference to seriously consider whether American Catholics can continue to "celebrate his memory by encouraging devotion to him, placing his name on churches and schools, and hosting processions and parades on his liturgical feast."

"Suppressing the late pontiff's cult would not mean telling people they need to throw away their relics or their medals — people could still practice private devotion to him," we write. "But for abuse victims, their advocates and many others, John Paul's memory is no longer a blessing. It should not be celebrated in public."

4. I'm done with the Knights of Columbus

In June, President Donald Trump held a photo-op in front of the St. John Paul II National Shrine in Washington, D.C., a shrine that was built by the Knights of Columbus. The day before that photo was taken, peaceful protestors were violently cleared from Lafayette Square so Trump could walk across and hold up a Bible in front of St. John's Episcopal Church.

Both photos were taken without the consent of either the Episcopal or Catholic bishops, writes Fr. Peter Daly, and over the strenuous objections of Washington Archbishop Wilton Gregory.

The Knights' hosting of Trump prompted Daly to make a decision.

"I will not be dragged into the political campaign on the side of Trump, whom I consider a racist who violates the U.S. Constitution and his oath of office by taking away the constitutional rights of American citizens," says Daly, who was a member of the Knights of Columbus for over 30 years. "Therefore, I resign. Not only do I resign, I encourage others to resign from the Knights of Columbus. I stand with my archbishop in this controversy. He was right."

5. AOC is the future of the Catholic Church

In July, U.S. Rep. Alexandria Ocasio-Cortez made a speech on the House floor responding to an incident on the steps of the U.S. Capitol in which Rep. Ted Yoho of Florida verbally assaulted her.

As NCR executive editor Heidi Schlumpf listened to her 10-minute address, she was struck by how often it referenced Catholic values, as Ocasio-Cortez universalized the need to treat all people with dignity and respect, noting that Yoho's behavior gave "permission to other men to do that to his daughters."

"Perhaps such Catholic references are not surprising, since the rock-star millennial leader of the left grew up Catholic and even wrote about how her faith influences her views on public policies such as mass incarceration, for a Catholic magazine," Schlumpf writes. "As a young Latina, Ocasio-Cortez represents the demographic future of the Catholic Church." 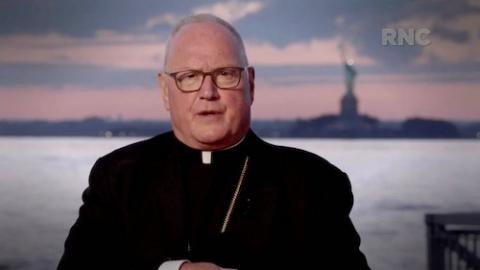 6. On a call with President Trump, Cardinal Dolan reveals his true colors

President Donald Trump held a phone call in April with an estimated 600 Catholics, among whom were bishops and Catholic school superintendents. One participant was New York Cardinal Timothy Dolan, "who seems to like to boast about his relationship with Trump almost as much as Trump likes to boast about himself," writes former longtime NCR columnist Jamie Manson.

Dolan, according to reports, responded saying the president was a "great gentleman" and a "great friend of mine."

"Yes, Dolan and other bishops are probably desperate for funding for Catholic schools, but prostituting the church to Trump is the worst possible solution to save an institution that is supposed to teach morality and hope to our children," Manson writes.

In this article, originally published by U.S. Catholic magazine and then later removed without notice, Stephen Schneck calls for the U.S. bishops to rise above their partisanship and engage instead on issues like abortion, immigration, climate change, school choice and racial justice.

"Fair enough, Trump; it's an election year, the white Catholic vote is up for grabs and politics is politics," Schneck writes. "My concern is not about you; it's about my church. By tradition, in keeping with longstanding United States Conference of Catholic Bishops guidelines and in keeping with papal directives and canon law, the church and its officials should avoid the appearance of partisanship."

8. Editorial: Dolan delivers the church to Trump and the GOP

This April editorial is also in response to the phone call that President Donald Trump held with Catholic school leaders and bishops, including New York Cardinal Timothy Dolan.

"The whole cringe-worthy exchange," we write, was made worse the following day when Dolan livestreamed his Mass inside St. Patrick's Cathedral, announcing that Trump was "worshiping with us."

"Friendships have existed in the past between U.S. presidents and princes of the church," we write. "How those affected the church's involvement in politics and policy, negatively or positively, differed from one circumstance to another. But it is rare, if not unprecedented, that the church's leadership apparatus would be co-opted to the degree seen in the case of Trump." 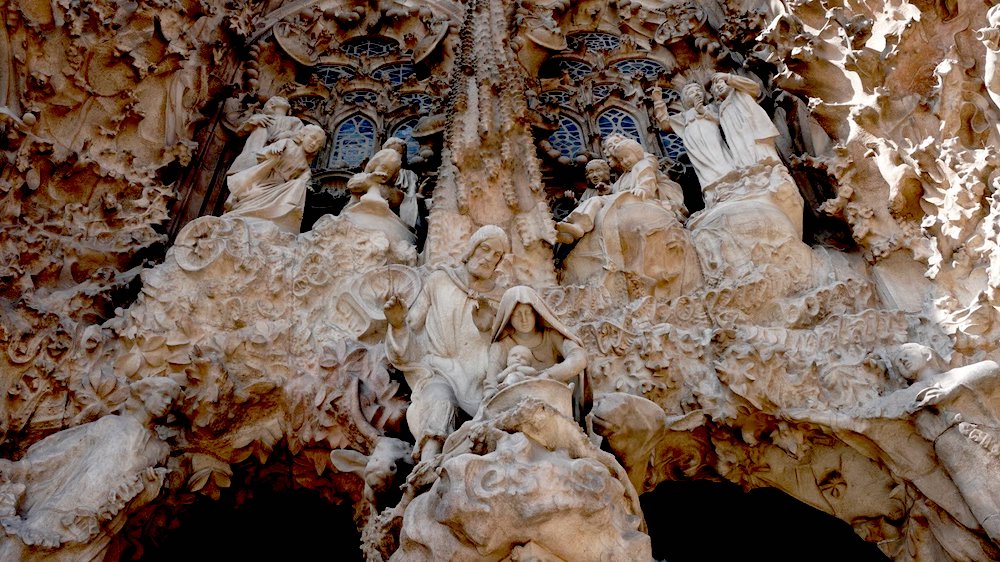 The Holy Family is seen as part of the Nativity façade in Sagrada Familia basilica in Barcelona, Spain. (CNS/Lincoln Ho, Grandin Media)

9. Who would you choose, Jesus or the Spirit?

Jesuit Fr. Thomas Reese asks readers to think about which they would rather have today, Jesus or the Spirit in this May column about the Ascension.

"If you could choose between having Jesus present today or having the Spirit, which would you choose? I think that for most Christians, it would be no contest," he writes. "Most of us would give up a lifetime with the Spirit for five minutes with Jesus. We want Jesus; we can skip the Spirit."

But Reese reminds us that no matter how close we get to Jesus, he is always external, whereas the Spirit is within us.

President Donald Trump attended the March for Life in person at the National Mall in January, joining thousands of Catholics and a few bishops.

"The selling of the church's moral authority is complete," writes former NCR Executive Editor Tom Roberts. "When someone so morally bankrupt and demonstrably anti-life as Trump, a misogynist who brags about assaulting women and whose primary interaction with others is to demean and degrade, can command the obeisance of the nation's Catholic leaders, the moral tank has been emptied."

This display, Roberts writes, drains the phrase "pro-life" of meaning and "sells the church even deeper into service of an ideology that severely diminishes Catholicism as a credible moral force in the larger culture."

"The church's credibility was sold to the highest political bidder and the chief auctioneer banged the gavel down on the final deal."